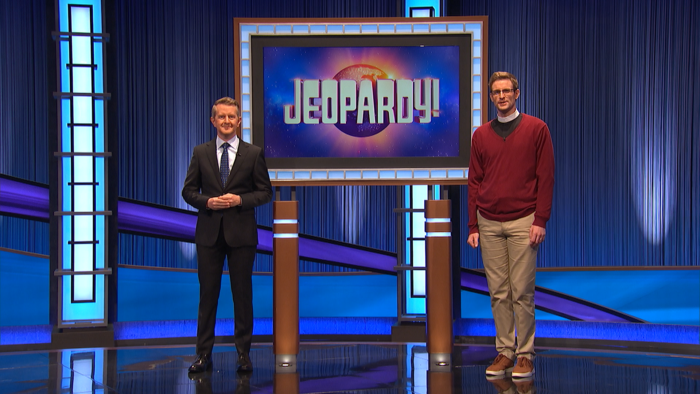 [Episcopal News Service] Answer: This Episcopal priest is now a four-day “Jeopardy!” champion, with winnings of $78,098.

Question: Who is the Rev. David Sibley?

Sibley, the rector of St. Paul’s Episcopal Church in Walla Walla, Washington, ended his streak on Sept. 30. But during his reign, he lived out a childhood dream, did some outreach on behalf of the church, and – above all – just had fun.

“It’s an odd and surreal experience to be where I am at the moment, but it’s been overwhelmingly positive and I have no complaints,” Sibley told Episcopal News Service on Oct. 3.

Sibley isn’t the first Episcopal priest ever to compete on the show – at least two others have – but he attracted the most attention, given the length of his run and his engagement with fans on Twitter.

Sibley initially didn’t wear a clerical collar, wanting to play not as a priest but just another contestant.

However, he soon realized that simply by virtue of being introduced as a priest before each game, his priesthood had become part of the show.

“It came to my attention really early on, I want to say in my first day , … that my appearance was causing a hard time for some people who have really been wounded by the church and their own experience. And I wasn’t surprised by that,” he said. “But it also sort of became clear to me that I needed to say something because I had this just strange little niche platform where I knew people were paying attention to me.”

I’m sure the occupation of “Episcopal Priest” traumatizing or triggering for some #Jeopardy so I want to be unequivocally clear: this priest is 💯 affirming of the lives, loves, and vocations of LGBTQIA+ people. (1/3)

Feeling that “it would just be poor stewardship of the moment to not” speak to those people, Sibley wrote a series of tweets explaining that he, as an Episcopal priest, is fully supportive of LGBTQ+ people.

“I wanted people to know that at least this priest understands that the Gospel is for everyone, and everyone means everyone, with zero exceptions whatsoever,” Sibley said. “And it definitely seems to have made an impact on some people, especially because I have had some one-on-one interactions with folks on Twitter that were overwhelmingly positive.”

In a separate Twitter thread, he also shared that he would be tithing 10% of his winnings to his parish, explaining what that meant and why he was doing it.

Episcopalians, let’s talk about giving, since seen to have your attention. My family will give a tithe of my total winnings before taxes – 10% – to my parish. Why? (1/4)

“There was a clear ministry opportunity that emerged as the week went on that I wasn’t expecting,” he said.

After missing a question about “the Rapture” in the religion category in his final game, Sibley explained why on Twitter:

So, why did the priest not buzz on the rapture question? Because I, with most of Christianity historically and worldwide today, don’t believe in it. A literal reading of Revelation is a more modern phenomenon of the last 300 years. So it didn’t pop into my head. #Jeopardy

“I went right for the $1,000 clue and it was a question about the Rapture. And of course, I don’t believe in the Rapture.”

The inclusion of the word “ascension” in the clue threw him off, and another player buzzed in with the correct answer.

“The word ‘ascension,’ obviously, as an Episcopalian, triggers very unique thoughts for me. … But that was also for me a pretty hilarious moment, because it was a consummate example of overthinking the clue.”

When Sibley went to Culver City, California, to film his episodes in August, he brought a selection of Oxford shirts, ties and sweaters. Despite the outfit changes, Sibley’s episodes were all filmed on the same day. After a few games, the producers asked him to consider wearing his clerical collar, which he did for his fourth game. He thinks the producers, knowing that there would be a religion category in that game, liked the idea of a priest in a collar taking on that category. He wasn’t making a statement, he said, though some other clergy registered their disapproval on Twitter. 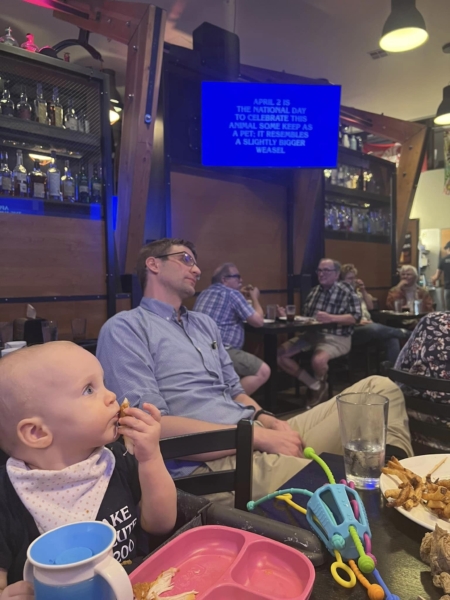 The Rev. David Sibley and his daughter watch his performance on “Jeopardy!” Photo source: David Sibley

“I didn’t have any decently strong opinions about the matter,” Sibley told ENS. “I just sort of did what the producers asked and that was fine by me.”

After the filming on Aug. 8, Sibley had to endure nearly two months of waiting for the episodes to air, unable to say publicly that he’d even been on the show.

“This week, it all unfolded and it’s been fun getting a chance to tell the whole story, but yeah, to be sitting on that news for almost two months is hard, but the joy of ‘Jeopardy!’ … comes from seeing what will happen and you don’t want to be a spoiler,” he said.

His winning streak has been big news in Walla Walla, and the excitement “will take a little bit of time to calm down.”

“There have definitely been occasions where people in town have recognized me at the pharmacy or at Starbucks or something, so that may take a little while to wear off,” he said.

As a champion, Sibley is eligible to compete in the Tournament of Champions in 2023, but there are a limited number of slots and he doesn’t know whether he’ll be selected.