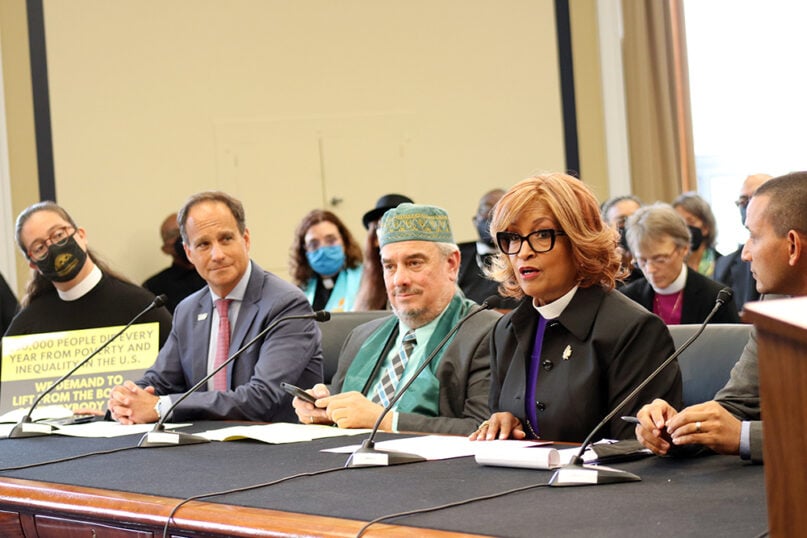 [Religion News Service — Washington, D.C.] Clergy from across the country have joined the leaders of the Poor People’s Campaign — an initiative supported by The Episcopal Church — in calling on Congress to vote on issues related to fair wages, voting rights and poverty reduction ahead of the midterm elections.

“Too many Americans are being negatively impacted by the lack of living wages, voting rights, and lack of policy support,” wrote the Rev. William Barber II and the Rev. Liz Theoharis, co-chairs of the Poor People’s Campaign: A National Call for Moral Revival in letters to House Speaker Nancy Pelosi, Senate Majority Leader Chuck Schumer and the minority leaders of the U.S. House and Senate.

“When we asked poor and low-income people who did not vote in the 2018 midterms why they did not turn out, the number one reason we heard was because they did not hear politicians speaking to them and the issues that impact their lives,” they wrote in the letters sent Sept. 27.

The letters were the latest plea for policy change by the movement that has since 2018 modeled itself on the original Poor People’s Campaign started by the Rev. Martin Luther King Jr. that brought together a wide range of activists to focus on what King called the “three evils” of racism, poverty and militarism.

Today’s Poor People’s Campaign, which also addresses environmental justice, focused on poverty in its letter to congressional leaders. While there was a decrease of millions of poor people after the American Rescue Plan was signed by President Joe Biden last year, “the failure of the Senate to extend those provisions and the pressure of inflation are together pushing more people to the edge,” it reads.

The co-leaders of the campaign and dozens of clergy from Christian, Jewish and Muslim faiths, including an Episcopal bishop, gathered on Thursday in a Capitol Hill briefing room before half a dozen Democratic members of Congress for a discussion of how those issues are affecting their congregants and communities. Calling the current national situation a “moral emergency,” Barber said the three-point request aims to help voters know where members of Congress stand before they head to the polls for the Nov. 8 election.

“We’re not coasting into the midterm,” she said. “We’re asking Congress to put forward legislation that could lift the load of poverty, to do this before November,
and to show that if there are representatives, if there are senators who are willing to stand against lifting tens of millions of people out of poverty and economic precarity that it’s within the power of people, especially for low-income people, to vote those politicians out.”

Barber countered the notion that restricted voting rights — a concern since key provisions were removed by the Supreme Court in 2013 — affect only one group of people.

“Why do we keep framing voting rights as a Black issue only? Why?” he asked, saying tens of millions of people are facing voting restrictions “because for nine years we have not restored the Voting Rights Act.”

The Democratic representatives who attended the briefing seemed supportive of the campaign’s aims. They were addressed by speakers including Bishop Vashti McKenzie, interim president of the National Council of Churches; Rabbi Jonah Pesner, director of the Religious Action Center of Reform Judaism; and Imam Saffet Catovic, leader of the Islamic Society of North America’s interfaith office. The speakers, along with others representing state affiliates of the Poor People’s Campaign, were among the initial signatories on the letter to the congressional leaders.

Washington Episcopal Bishop Mariann Budde said at the briefing that she and other clergy were speaking out for people served by churches like those in her diocese, such as one “in what appears to be an affluent neighborhood” where hundreds line up weekly for two grocery bags of food.

“Those who benefit from these policies as they are would prefer and work very hard to keep those consigned to poverty silenced and invisible,” she said. “But this movement exists so that they will not be silent, and neither will we.”

Rep. Barbara Lee, D-Calif., chair of the Majority Leader Task Force on Poverty and Opportunity, thanked Barber and the other clergy in attendance.

“We need your voice here now more than ever,” she said, noting her support for the campaign’s “Third Reconstruction” agenda that has called for policies to transform the country by helping an estimated 140 million poor and low-income people.

Barber said the campaign is seeking to reach at least 5 million people ahead of the midterm elections, including people who have registered to vote but have not cast a ballot. He’s hoping that if poor and low-wealth people feel they are heard by politicians or the campaign’s door knockers, they will go out and vote. Such action, he predicts, could lead to policies that will help them.

“It is economically insane, it is constitutionally inconsistent, it’s politically inept and it’s morally indefensible not to be calling the name of poor folk by name,” Barber said in a Tuesday interview. “We must name poor and low-wealth people as a targeted voting bloc and stop ignoring them and not speaking specifically to them and their needs.”

Asked what happens if the letter writers’ request is not met and additional votes do not occur soon, Barber said after the briefing that it would be a teachable moment.

“If we don’t get the vote, it’ll be clear that it’s not just a few congresspersons,” he said, “but it’s a systemic problem — that the whole Congress evidently only wants to deal with poverty incrementally.”