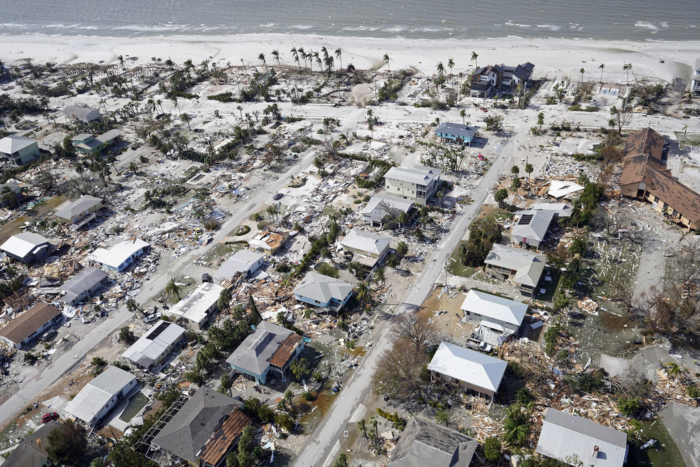 Homes and debris in the aftermath of Hurricane Ian in Fort Myers Beach, Florida, on Sept. 29, 2022. Photo: Wilfredo Lee/AP

[Episcopal News Service] While Episcopalians in South Carolina prepared for the arrival of Hurricane Ian, the Diocese of Southwest Florida was still reeling from the storm’s impact, with the full extent of destruction still unknown. Some parishes haven’t been able to get to their buildings yet, and some are still trying to make sure their parishioners are safe.

Although Ian impacted a wide swath of Florida, extreme damage was heavily concentrated in the Fort Myers-Cape Coral area. Ian came ashore there on the afternoon of Sept. 28 as a Category 4 hurricane with winds of about 150 mph and a storm surge that left parts of the area under several feet of water. On Sept. 30, state officials said they had identified about three dozen storm-related deaths.

To donate to hurricane recovery in the Diocese of Southwest Florida, click here.

“At this point, communication remains difficult with those in the hardest hit areas,” Bishop Coadjutor Douglas Scharf told Episcopal News Service. Scharf, who was consecrated on Sept. 24, said the diocesan office was still without power and internet, but diocesan leaders had been able to reach most clergy and parish leaders in the affected areas.

“Several of our churches have sustained significant damage, but we have not yet been able to gain access to those churches in the hardest hit areas. We have received messages of support and encouragement from across the church, which we deeply appreciate.”

One of the hardest-hit spots was Sanibel Island, which “got hit with biblical storm surge,” Gov. Ron DeSantis said. Ian washed away part of the causeway linking Sanibel Island to the mainland, rendering it inaccessible by road. Residents who did not evacuate are being rescued by helicopter, including some parishioners of St. Michael and All Angels Episcopal Church.

The Rev. Bill Van Oss, rector, and his wife, Parish Communications Director Sue Van Oss, evacuated to a condo in Fort Myers. Sue Van Oss told ENS she has been trying to keep track of who has been rescued and who is still on the island. She said she was told there were two deaths on the island, but didn’t know the victims’ identities.

“They’re headed over there with Chinook [helicopters] that can load 20 people. And as soon as they find people, they wade through about waist-deep water. It is absolute destruction there. There were homes on fire from the gas. They went through hell, but – praise God – they’re getting them off as much as they can.”

The Van Osses picked up two parishioners who were airlifted to a field east of Fort Myers on the evening of Sept. 29, she said, and two more parishioners got off the next helicopter and were met by family.

But some parishioners were still waiting to be rescued on Sept. 30 – including some in their 90s, she said.

“We got one text at 5 this morning from four parishioners that are in a home together, that said they’re okay,” she said, but the helicopter rescues are going slowly because there aren’t many dry spots where they can land.

Another couple in their 90s managed to get one text message through to Van Oss, who contacted the sheriff’s department with their address, but she hasn’t heard from them since.

Van Oss said that unlike many buildings on the island, the church itself seems relatively intact.

“The church is standing – we got an aerial picture. There’s water all around it and it looks like some of the roof of the thrift shop came off. But the parish office is brand new. It was just completed last year, so that was hurricane-proof. Hopefully. We don’t know.”

In Fort Myers Beach, another Episcopal parish had even less information about the fate of their church. Aerial photos show a scene of total devastation in the barrier island town.

“Fort Myers Beach and Sanibel Island look like they will need to be 80% rebuilt,” one Florida emergency management official estimated.

With little cell service and roads impassable, there was no way of knowing what state St. Raphael’s Episcopal Church was in, said the Rev. Jean Hite, rector, who had evacuated south to Naples. But more importantly, she said, the parishioners are safe, including some she had been trying to reach the day before.

“The ones that we were really concerned about, we’ve located them. We don’t have direct contact with them, but indirectly, we know that our parishioners are OK,” Hite told ENS.

“This is a difficult time but we will get through this together one day at a time,” Gibbons wrote.

With the area facing a long road to recovery, the diocesan convention scheduled for Oct. 14-15 in Punta Gorda has been canceled and will be rescheduled later.

“The last 36 hours have been harrowing for many of us in the Diocese of Southwest Florida,” Diocesan Bishop Dabney Smith wrote in an email on Sept. 29. “Many of our churches and huge numbers of our parishioners are now faced with the daunting task of recovering from the effects of Hurricane Ian. Such recovery efforts will take much time and energy.”

“This is a time when we are called to be the Body of Christ and to care deeply for one another,” Scharf said. “As the Apostle Paul reminds us, ‘If one member suffers, all suffer together; if one member rejoices, all rejoice together.’”

Meanwhile, as Ian tracked north, in the Diocese of South Carolina, St. Stephen’s Episcopal Church postponed a bicentennial celebration that had been scheduled for Sept. 30 because of the approaching storm. “The safety of our guests and vendors is our priority,” the church said. “We pray for the communities already impacted by Hurricane Ian.

Before hitting Florida and South Carolina, Hurricane Ian knocked out power across Cuba when it made landfall there on Sept. 27. Efforts to restore electricity hadn’t progressed far beyond the capital Havana by Sept. 29, according to Reuters.

“The Episcopal Church in Cuba has mobilized its local disaster committees who are assessing the damage, and potential responses, in their communities,” Kellie McDaniel, program officer for Episcopal Relief & Development said in a news release. “We pray for the people of Cuba who are living through several recent disasters.”

Ian was the second hurricane in a week to hit the Caribbean, after Hurricane Fiona. Episcopalians in Puerto Rico have been active since Fiona in bringing relief and assistance to neighbors in need through church-affiliated programs. The diocese set up support centers in Mayagüez, Ponce, Trujillo Alto and Maricao where church volunteers are distributing food and water.

Servicios Sociales Episcopales, an Episcopal social services nonprofit, also has been taking food and water to hard-hit neighborhoods. “We want to let these communities know that they are not alone and that we are committed to bringing a message of hope to the people who need it most,” the organization said in a recent Facebook post about hot food distribution in Toa Baja.

The eye of Hurricane Fiona swiped Puerto Rico on Sept. 18, briefly making landfall on the island’s southwest coast and dropping the most rain across the southern half of the island. The next day, the storm made landfall on the east coast of the Dominican Republic before turning northward.

Episcopal Relief & Development has been in contact with Episcopal and Anglican diocesan leaders in Puerto Rico, the Dominican Republic, the U.S. Virgin Islands, the Bahamas and Turks and Caicos to assist them as they respond to their communities.

After initial power outages from Fiona, full electric service was restored Sept. 24 at the San Lucas Episcopal Medical Center, which continues to receive patients. Full service also was restored to the San Lucas Medical Tower by Sept. 29, according to updates on Facebook.

Power, however, remained out for about 233,000 homes in Puerto Rico as of Sept. 30, and lack of clean water also has been a widespread problem since Fiona.

President Joe Biden, in discussing the federal response to Hurricane Ian, pledged not to forget the needs of Puerto Ricans struggling to bounce back after Hurricane Fiona, which hit the U.S. territory five years after it was devastated by Hurricane Maria.

“I want to be clear: To the people of Puerto Rico, we’re not going away,” Biden said. “I am committed to you and the recovery of the island. We’ll stand by you for however long it takes to get it done.”