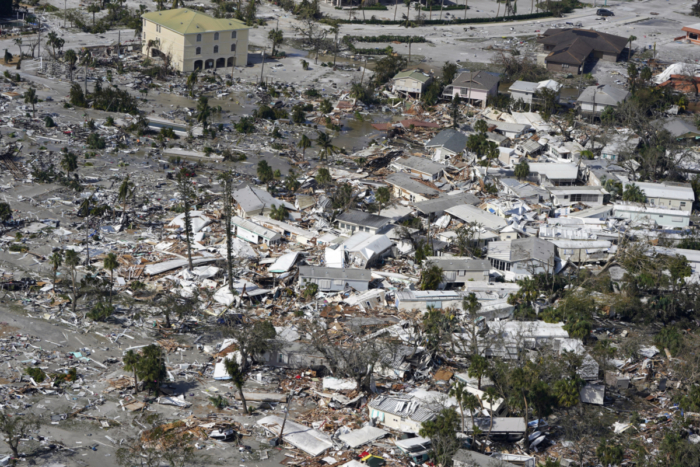 Damaged homes and debris were left behind by Hurricane Ian in Fort Myers, Florida, on Sept. 29, 2022. Photo: Wilfredo Lee/AP

[Episcopal News Service] Hurricane Ian’s path of destruction across Florida has left many Episcopalians in the dark, both literally and figuratively, as they try to figure out how their neighbors and buildings have fared. Many evacuated and are sheltering away from their home communities, without reliable power or phone service, and cannot return yet.

Ian was so destructive that the extent of the damage it caused may not be known for days; there may have been “substantial loss of life,” President Joe Biden said on Sept. 29. Thousands of people were still waiting to be rescued, local officials said in the morning, and more than 2.6 million customers remained without power.

Ian came ashore near Fort Myers on the afternoon of Sept. 28 as a Category 4 hurricane with winds of about 150 mph, as storm surge left parts of the area under several feet of water. As the storm moved inland, 10 to 20 inches of rain caused record flooding on Central Florida’s lakes and rivers; floodwaters could take weeks to recede in some cases. The day before, Ian hit Cuba as a Category 3 storm, knocking out power to the entire island and killing at least two people. Episcopal Relief & Development is working with the Episcopal Church in Cuba to assess damage and organize relief efforts.

Although Ian weakened to tropical storm status by the time it moved east over the Atlantic Ocean, it is predicted to regain strength and strike the Charleston, South Carolina, area as a Category 1 hurricane on Sept. 30.

The Diocese of Southwest Florida, covering most of the state’s Gulf Coast, took the most direct hit. Lindsey Nickel, the diocese’s director of communications, said Bishop Dabney Smith and newly consecrated Bishop Coadjutor Douglas Scharf were trying to contact clergy and congregations to assess the situation. The diocesan convention scheduled for Oct. 14-15 in Punta Gorda has been canceled and will be rescheduled later.

“The last 36 hours have been harrowing for many of us in the Diocese of Southwest Florida,” Smith wrote in an email. “Many of our churches and huge numbers of our parishioners are now faced with the daunting task of recovering from the effects of Hurricane Ian. Such recovery efforts will take much time and energy.”

Nickel said the diocese is already working closely with Episcopal Relief & Development, but specific needs are still being identified.

“At this point, the most beneficial form of assistance is financial, as we do not have the means to effectively coordinate or distribute supplies. Financial assistance will enable us to respond quickly and adaptively to the specific needs on the ground,” she said.

Sanibel Island, near Fort Myers, was cut off from the mainland when part of its bridge washed away, leaving St. Michael and All Angels Church inaccessible. The Rev. Bill Van Oss, rector, and his wife Sue, the church’s communications director, evacuated to Fort Myers, but they know some of their parishioners didn’t.

“We have no word from the island,” Sue Van Oss told ENS. “It is completely cut off. … We have no cell service or power. We walk to the hospital to get a few minutes of Wi-Fi. Our immediate need is to make sure the first responders get to the people that were left on the island via boat or helicopter.”

Boca Grande, on another barrier island near Fort Myers, also sustained major damage. The Rev. Michelle Robertshaw, rector of St. Andrew’s Episcopal Church there, said residents and business owners who evacuated are not allowed back on the island for 48 hours while emergency crews are assessing damage, but some who stayed behind said the church is “intact.”

“But,” she told ENS, “I have not been able to get on island to assess what ‘intact’ means – is there water damage? Is the roof sheared off?”

St. Raphael’s Episcopal Church in Fort Myers Beach was also in one of the worst-hit areas. Videos have shown water up to the roofs of homes there; Lee County Manager Roger Desjarlais said an aerial survey showed that some buildings in town “are simply missing.” The Rev. Jean Hite, rector of St. Raphael’s, told ENS she was still trying to get basic information from her evacuation site.

“We’re just getting news on the radio at this point, but the beach itself is pretty much devastated,” Hite said. “I understand that pretty much everything around the church was flooded. We have a few parishioners that I haven’t been able to get in contact with that I know are in the area, so I’m trying to do that by whatever means possible. Other than that, I can’t give you any details. It just looks devastating.”