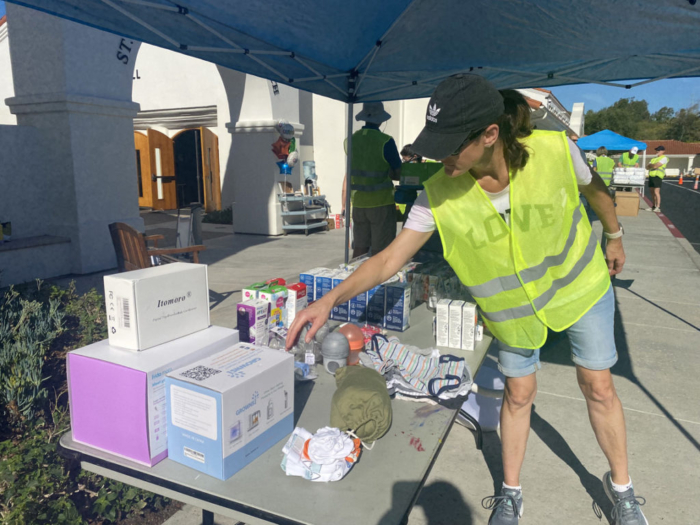 [Diocese of Los Angeles] For Angel and Selina, the 30-mile drive north once a month from Camp Pendleton to St. Margaret’s Infant Pantry in San Juan Capistrano for diapers, formula, Pedialyte, and other baby giveaways, is well worth the trip.

“The cost of everything has gone up astronomically; this takes the burden off,” said Selina, a regular visitor since the drive-through pantry opened in September 2021. “Being able to come here prevents us from having to choose between groceries and diapers.”

St. Margaret’s started the drive-through outreach a year ago after assessing community needs,  according to the Rev. Canon Robert Edwards, rector. “We discovered that while there were several local programs assisting with food insecurity, the needs of families with infants were not being met.”

Claire Frahm, executive administrative assistant said the school, which serves about 1,300 students in preschool through 12th grade, is committed to community service and local partnerships as part of the educational process.

“We’ve done everything from inventorying the items to putting bags together,” Frahm said. “We even brainstormed a mission statement for the pantry, and last year, we focused on educating about the root causes, like why are these families struggling?”

Although no mission statement has been adopted, the time was used to help educate students about the importance of one, Frahm said.

Supplies are loaded into the trunk of a client’s car. Many of those who come to the pantry are picking up supplies for friends and neighbors. Pour students on the cost of these products, particularly formula for a family and how much this (expense) cuts into a young family’s monthly budget. We explained the budget for the pantry, the contribution of diapers and other products from Family Assistance Ministries and that the money to run the Pantry comes from in-kind contributions, cash donations and from the church outreach budget.

“We’ve even had little games to help educate even the littlest ones,” she said. “Like, how much do you think formula costs? Do you have a baby in your family? Or how many In-n-Out burgers can you buy for the cost of a can of formula? It was something like nine.”

Donations from both school and church families, and other fundraising, help defray the $8,000 monthly cost of infant formula, according to John Harms, chair of St. Margaret’s local outreach committee. In just a year’s time, he said, the pantry has served 1,968 infants from 1,357 families; about 40 percent are from Camp Pendleton.

Volunteers begin arriving about 8 a.m. Quickly, sunshades and tables are assembled several vehicle lengths apart in the front of the campus. James David “J.D.” Bastress, 12, and others roll out diapers on carts from storage areas to the tables as guests begin arriving as early as an hour before the scheduled 10 a.m. start time.

Bastress, a St. Margaret’s parishioner and Ladera Ranch Middle School 7th grader, told The Episcopal News he enjoys joining his father, also named James, for the once-monthly program, “because it’s something to do that helps out a lot of people, and it’s important to be involved.”

He and other volunteers “runners” walk alongside guests’ vehicles, asking a few simple questions, like “how they’re doing, what size diapers they need.” The requested items are placed along with the pre-packed shopping bags into vehicle trunks. Often guests are picking up for their own families and others, as well.

“We’ve learned over time through our distribution to keep things moving” because the lines are long, Harms said. “We prepackage bags with essentials that everyone receives. We put wipes, Pedialyte, prayer cards from the school, and then they’re ready to go.

Identification is not required and “the questions are asked to inform us about our ordering” because of age-related diaper sizes and formula products, he added.

Another important question: “How did you hear about us? I asked the very first person who came in, a year ago, and he said, ‘Well, there’s a garage sale across the street, and I just saw your sign,” Harms said. “We had 70 to 73 people the first month. Since then, we’ve had a steady increase. We average about 188 families per month, although last month we had 250.”

Arika Ferguson also publicizes the pantry to Camp Pendleton families on Facebook, and picks up the much-needed items for those unable to make the trip to San Juan Capistrano.

“My husband is a Navy corpsman; we moved to Camp Pendleton in 2014 and I started volunteering,” Ferguson told The News. “My son is 16. I wish they’d had something like the infant pantry when my son was younger.

“When my husband and I were newly in the military, we struggled,” she said. “We didn’t know about free food pantries and for me, instead of seeing a mom struggle and cry and say, ‘I’m running out of formula, I don’t know what to do,’ I can say, ‘hey, come see John.’ I just get the information out there.”

On Sept. 24, Ferguson was picking up diapers and formula for four families. “One just gave birth to twins, and her babies are in the NICU. Sadly, they don’t get to come home yet,” she said. “A lot of families want to come, but they don’t have cars, or their husbands are deployed, or maybe they just have too many kids and it’s too hard to come. So, I come for them because what St. Margaret’s does is amazing.”

Neighbors Katie, 35, and Kat, 27, made the drive together from Camp Pendleton on Saturday, Sept. 24.

It was the first trip for Katie, 35, but came at just the right time. “I just gave birth,” she said. “I have a two-week-old. We just moved here in May, and we have no family in the area. My neighbor asked me if I wanted to come with her and, I said yes. Knowing people are there to help makes me feel good.”

Her neighbor, Kat, 27, excitedly showed off orange, white and black animal-themed knitted baby booties as the two women tried to guess: “Is it a tiger? a cat? A bear? I don’t know what animal it is, but these are so cute.”

Kat has been making the drive to the infant pantry for four months and happily welcomed her neighbor’s company. “I have a ten-month-old baby, and this has been really helpful for us,” she said. “Military life is really lonely and so to have a community that’s really willing to help us … You know, everyone needs extra help at some point in time, so just to have this community is really so nice.”

Harms, a veteran himself, understands. “There are always some amazing stories I can tell you. One young man came in, a U.S. Marine. He stopped at the formula table and was looking like he wasn’t exactly sure what to do. We welcomed him and asked if we could help. The baby was four months old and in the back seat. He said: ‘I was deployed when the baby was born. My wife is deployed now.’”

And there are the families without cars who bring their babies in strollers and walk through the stations, Harms said. “We just load the strollers up as much as we can until the next time.”