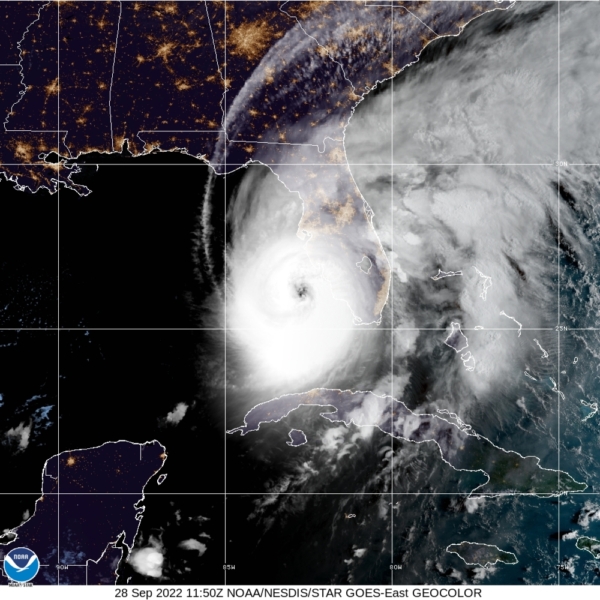 [Episcopal News Service] As Hurricane Ian hits the Gulf Coast of Florida with Category 4 strength, the dioceses in its path are preparing their parishes and readying resources.

On Sept. 28 in the afternoon, Ian made landfall near Fort Myers with winds of up to 155 mph, just below Category 5, making it one of the most powerful hurricanes to hit the United States in decades.

Forecasters have predicted storm surges of up to 18 feet on the coast in the Fort Myers area, 15-26 inches of rain and “catastrophic wind damage” as the storm passes across Florida. The most recent forecast predicts that Ian will travel northeast over Orlando and Daytona Beach before going out to sea and then heading back toward Georgia or South Carolina. Ian hit Cuba on Tuesday as a Category 3 storm, knocking out power to the entire island.

The Diocese of Southwest Florida, covering most of Florida’s Gulf Coast, is taking the most direct hit. Having just consecrated the Rt. Rev. Douglas Scharf bishop coadjutor on Sept. 24, the diocese has rapidly moved “from glory to a time of uncertainty and anxiety as we await the ramifications of Hurricane Ian,” Diocesan Bishop Dabney Smith wrote.

Smith said the diocese has been in preliminary conversation with Episcopal Relief & Development in anticipation of possible assistance and urged all parish leaders to review their disaster plans.

The diocese has compiled a list of hurricane resources including insurance information, important contacts and the diocese’s disaster response plan. With the help of Episcopal Relief & Development, the diocese has also installed a system called AlertMedia that enables two-way instant communication between the diocesan office and parishes by text and email.

The Diocese of Central Florida is also expected to take a direct hit, but the storm is predicted to weaken to Category 1 by the time it reaches the diocesan seat of Orlando. The diocese has postponed its New Beginnings Relaunch Retreat, which was scheduled for Oct. 7-9. It has also shared its disaster response plan. The neighboring Diocese of Florida, based in Jacksonville on the Atlantic coast, postponed two retreats at Camp Weed but plans to reopen its office on Oct. 3.

Episcopal Relief & Development offers hurricane resources through its U.S. Disaster Program and recently facilitated relief efforts in Puerto Rico when Hurricane Fiona hit on Sept. 18, causing the most damage in the southwestern region of the island.