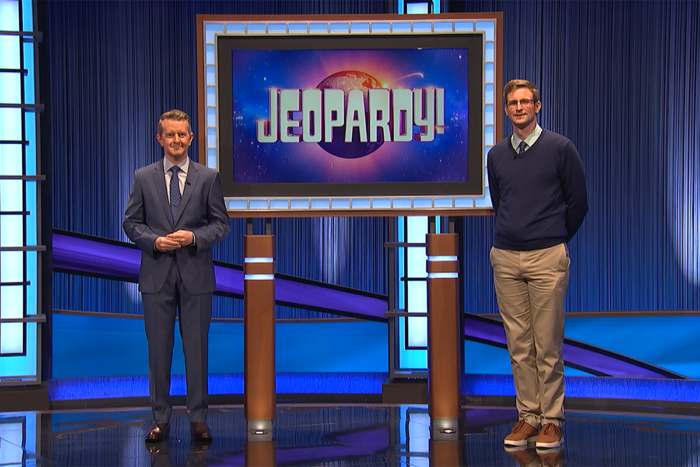 “Jeopardy!” host Ken Jennings poses for a photo with the Rev. David Sibley, who will appear on the Sept. 23 episode of the long-running game show. Photo: Jeopardy! Productions

[Episcopal News Service] This Episcopal priest from Walla Walla, Washington, will demonstrate his knowledge of trivia before a national audience on Sept. 26 when he appears as a contestant on the TV game show “Jeopardy!”

The correct response is: Who is David Sibley?

Sibley, rector of St. Paul’s Episcopal Church in the Diocese of Spokane, was sworn to secrecy by the show’s producers, so you’ll have to watch the episode to see if he wins. (Check local listings.) But when Episcopal News Service caught up with him by phone on Sept. 23, Sibley gladly shared his impressions of meeting “Jeopardy!” host Ken Jennings and interacting with other contestants.

Jennings was “wonderful,” Sibley said, and “everyone in that studio was just thrilled to be there, living some kind of lifelong dream. Everyone was just unfailingly kind … It was just an incredibly supportive and fun experience.” 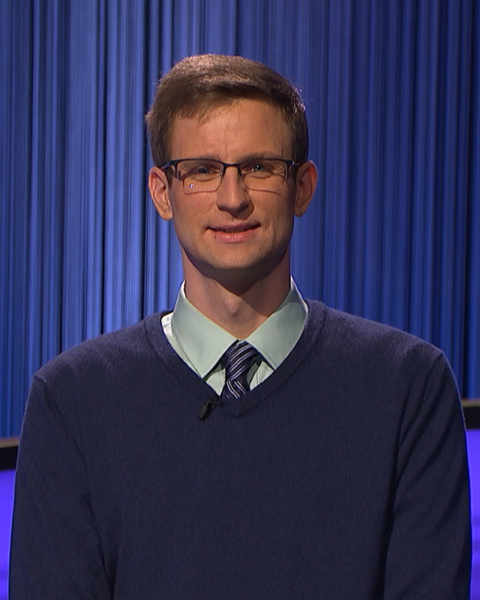 The Rev. David Sibley was a finalist for contestant once before, in 2007, when he was a college sophomore. Photo: Jeopardy! Productions

Sibley, 37, traveled to Sony Pictures Studios in Culver City, California, for the “Jeopardy!” taping in August. At the time, the only person who knew why he needed to miss a Sunday service at St. Paul’s was his wife – and the church’s vestry, which met in executive session to receive the confidential news.

He was cautiously cryptic in explaining his brief absence to the congregation: “I’m going to be away next Sunday,” he told parishioners. “When I can tell you about it, it’s going to be a lot of fun.”

Sibley is at least the third Episcopal priest to compete on “Jeopardy!” The Rev. Kit Carlson, a priest in East Lansing, Michigan, appeared on the show in September 2008, and the Rev. Scott Russell, a chaplain at Virginia Tech, was a contestant in December 2011. Russell now serves as a chaplain at New Jersey’s Rutgers University.

Growing up, Sibley was the kind of kid who would watch “Jeopardy!” and “yell answers at the screen.” He continued to nurture his love of trivia in high school and college by participating in quiz bowl competitions. Then in 2007, as a sophomore studying chemistry at Furman University in Greenville, South Carolina, Sibley first applied to be a contestant on “Jeopardy!”. He was invited to travel to Atlanta, Georgia, for an in-person audition and did well enough to be added to the pool of potential candidates, but he never got the call to compete.

Sibley suspects his personal story at that time wasn’t enough for the producers to give him a chance. As a college student, he said, “I was probably as boring as drying paint.”

When he tried again 14 years later, in summer 2021, he had the snappier biographical label of “Episcopal priest from Walla Walla.” After he completed an online test of 50 rapid-fire questions, the show invited him to a follow-up test and audition on Zoom. He was told again that he would be added to the pool of potential contestants, for the next 18 months. Again, he might get chosen or he might not.

Sibley, who serves as a deputy for the Diocese of Spokane, was attending the 80th General Convention in Baltimore, Maryland, in July when he got the call. It was from Sony Pictures Studios, and it interrupted a conversation Sibley was having with other Spokane deputies and Bishop Gretchen Rehberg.

“I immediately was like, ‘Excuse me, bishop, I have to take this call,’” he said. The person on the line asked to confirm his personal details and check his upcoming availability. About a week later, another call came offering him his shot as a “Jeopardy!” contestant. 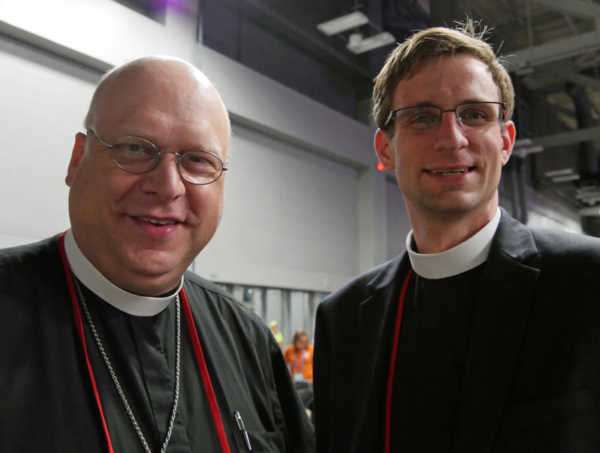 The Rev. David Sibley, right, was an alternate deputy from the Diocese of Long Island in 2018 when he and the Rev. David Simmons of the Diocese of Milwaukee generated buzz at the 79th General Convention with their @gc79pigeon Twitter account. Photo: Mary Frances Schjonberg/Episcopal News Service

Although, Sibley couldn’t discuss what happens on the Sept. 26 episode, he said he went into the taping figuring he had an advantage on questions about the Bible and other religious topics, as well as chemistry, his college major. His wife, Emily Sibley, is a comparative literature professor, and she tried helping him expand his knowledge of books.

Otherwise, he mainly practiced by watching as much “Jeopardy!” as possible, to get a feel for the rhythms of responding to the host while immersing himself in common categories. Getting used to the buzzer, a notorious challenge for contestants, was something he could only practice in rehearsals immediately before the show’s taping.

And ultimately, he said, even on a smart game show like “Jeopardy!” winning can come down to “a whole lot of luck.”

When the show airs in the evening Sept. 26 on the East Coast, Sibley plans to watch with some friends on Zoom. After that, he will join an in-person watch party in Walla Walla, at an eatery called Wingman Birdz and Brewz. Local friends and members of his parish will be there to cheer him on.

Though Sibley didn’t wear his clergy collar on the show, he said he was “really mindful that in some way I was going to be representing our church, so I hope the presentation that I made will be one that the folks that watch ‘Jeopardy!’ can appreciate.”

And when he watches “Jeopardy!” on TV in the future, if he still shouts out responses from home, he probably won’t be as critical of contestants who get easy questions wrong.

“In the moment,” he said, “it is a lot harder than I ever would have imagined.”