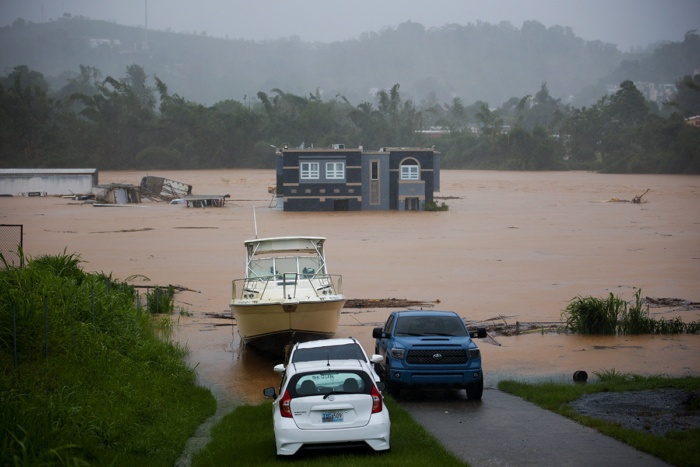 A home is submerged in floodwaters caused by Hurricane Fiona in Cayey, Puerto Rico, on Sept. 18. According to authorities, three people were inside the home and were reported to have been rescued. Photo: Associated Press

[Episcopal News Service] Hurricane Fiona knocked out power across Puerto Rico on Sept. 18 while dropping as much as 30 inches of rain in some parts and causing “catastrophic and life-threatening flooding,” according to the National Weather Service. The storm is just the latest natural disaster to impact the U.S. territory, which was devastated five years ago by Hurricane Maria.

Fiona also hit the Dominican Republic hard as it continued west, and Episcopalians in the region are still assessing the damage while mobilizing to help neighbors in need when the storm subsides.

The Diocese of Puerto Rico canceled Sunday services across the island and in a Sept. 18 Facebook post, Puerto Rico Bishop Rafael Morales Maldonado identified “flooding, landslides, blocked roads” across the island, “but even more, hope and resilience.” Morales said he expected on Sept. 19 to have a better sense of the local impacts as the diocese looks to offer assistance. “Stay safe,” he said.

The eye of Hurricane Fiona swiped Puerto Rico on Sept. 18, briefly making landfall midafternoon on the island’s southwest coast with maximum sustained winds of 85 mph, The rain from the storm has been heaviest across the southern half of Puerto Rico.

Early morning Sept. 19, Fiona made landfall on the east coast of the Dominican Republic. It is expected to turn northward this week as it heads into the Atlantic, though rain from the storm could continue to pelt Puerto Rico into the afternoon Sept. 19.

Morales told ENS later that he met that afternoon with his diocese’s Emergency Affairs Committee. The diocese’s is developing its response, which will include four aid centers, in the municipalities of Trujillo Alto, Mayagüez, Ponce and Maricao. Starting Sept. 21, the diocese will offer food, water, hygiene products and spiritual and psychological support to those affected by Hurricane Fiona.

In the Dominican Republic, The Episcopal Church has a significant presence in the east, where Fiona made landfall, Bishop Moises Quezada told ENS.

“We are making preparations to help the victims in these places and other surrounding communities that are being devastated by the passage of this natural disaster,” he said. “The clergy and the parishioners have remained in chains of prayer and in constant communication.”

Episcopalians in Orlando, Florida, where many Puerto Ricans moved after Hurricane Maria, have been following developments on the island closely as they prepare to support recovery efforts and welcome any who may be displaced by the most recent storm. In that work, the Episcopal Churches of Christ the King and Jesus de Nazaret have helped coordinate communications between government officials and relief agencies in Florida.

“We’ve asked our federal legislators that if FEMA is bringing families to Orlando, to work really hard at placing them in places where they will succeed,” Rodriguez said, explaining communities should be chosen that have adequate housing, transportation, employment and safe places for children to play.

“A hurricane in Puerto Rico causes displacement. We don’t know if there is going to be a big wave of displacement or if it’s going to be small,” he said, but residents should be ready to show that “central Florida is welcoming to all people.”

Tony Ortiz, a member of the Orlando City Council, also joined the Zoom meeting and echoed Rodriguez’s words. “We’re ready,” Ortiz said, though it remains unclear how many people from Puerto Rico will move to Orlando after Hurricane Fiona. “We’re waiting with open arms,” he said. “I know when the time comes, everybody’s going to be joining in.”

Rainfall continued to be the biggest worry in the afternoon on Sept. 19, the Rev. Bryan Vélez, who serves as vicar of Church of the Good Shephard in Fajardo and as a chaplain and 1st lieutenant in the 156th Wing of the Puerto Rico Air National Guard, told ENS.

Vélez’s parishioners were safe, he said, and that he was awaiting instructions from the National Guard on its community response.

The Diocese of Puerto Rico – with about 5,000 Episcopalians and 52 congregations across the island – also can look back on the experience of Hurricane Maria for lessons in how it now responds to Fiona. On Sept. 20, 2017, Maria made landfall as a Category 4 storm on the island’s southwest side, bringing 155 mph winds, massive rains and flooding across the island.

Puerto Rico’s 3.3 million residents are U.S. citizens. About 3,000 deaths were blamed on Maria. After the hurricane, diocesan staff sprang into action and divided the island into four quadrants, assessing damage and distributing food, water and other emergency supplies. With the backing of Episcopal Relief & Development, Episcopal churches in Puerto Rico became points of distribution for emergency supplies, even as 66 of the diocese’s 87 buildings also had sustained damage in the storm.

“Puerto Rico has an excellent disaster response committee and system that is in place as of Hurricanes Irma and Maria. The church will rally in support of those in need in their communities. My hope is that the wider church will support those diocesan efforts,” the Rev. Glenda McQueen, The Episcopal Church’s partnership officer for Latin American and the Caribbean, told Episcopal News Service. “It is important for Episcopalians and all those living on the island and the church in Puerto Rico to know that they can count on Episcopalians for support.”

It is too early to say what the needs will be from Hurricane Fiona, but Episcopal Relief & Development is in contact with Episcopal and Anglican diocesan leaders in Puerto Rico, the Dominican Republic, the U.S. Virgin Islands, the Bahamas and Turks and Caicos.

“Our partners are preparing for and assessing the needs in their communities while dealing with continued rain and flooding created by Hurricane Fiona,” said Angel Venegas, Episcopal Relief & Development’s U.S. disaster program officer. “We stand ready to assist in the coming days and weeks.”