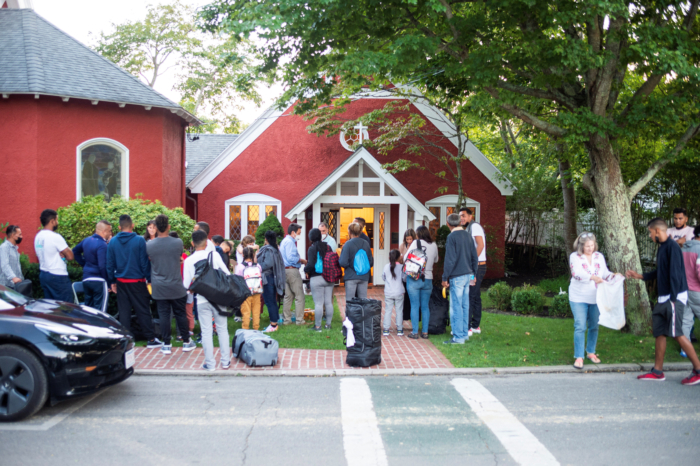 [Episcopal News Service] St. Andrew’s Episcopal Church in Edgartown, Massachusetts – a summer resort town on Martha’s Vineyard – was thrust into the national spotlight after taking in 48 migrants who were unexpectedly dropped off on the island on Sept. 14.

For almost two days, the small parish provided shelter to the migrants – including some children – who are reported to be mostly from Venezuela. Most spoke little or no English and did not know where they were.

With no warning that the migrants were coming, church leaders and locals leapt into action and “banded together as an island community to really do something miraculous,” St. Andrew’s rector, the Rev. Chip Seadale, told Episcopal News Service.

During their stay at the church, donations of supplies and services – including offers of legal counsel, language interpretation and even dental work – poured in. The migrants’ basic needs were met thanks to the “amazing outpouring of community support,” said St. Andrew’s Co-Warden Palmer Marrin.

The migrants were moved to Joint Base Cape Cod on Sept. 16, where accommodations, legal services and health care were set up for them. Massachusetts Gov. Charlie Baker’s administration is supporting the local effort with state emergency aid.

The migrants who arrived in Massachusetts are among a wave of migrants from Central and South America that has stressed America’s already overloaded asylum system over the past year amid shifting immigration policies, tenuous international relations and the ongoing COVID-19 pandemic. Several said they had been detained after crossing the U.S.-Mexico border in Texas and shuttled around the U.S. before being put on a plane in Florida that they were told was going to Boston. The flights were part of a scheme by Republican governors of border states to spite Democrats whose immigration policies they oppose.

Seadale said the church took in the migrants after a churchgoer had reached out to him, knowing that the church’s facilities have been used as part of a homeless shelter program during the winter. He was attending a conference in North Carolina when he got the call.

“She said that a group of 50 Spanish-speaking folks had shown up; they’d … walked a number of miles from the airport and had nowhere to go. That was all she learned,” Seadale told ENS. “None of them really knew [where] they were.”

Seadale started calling around to other churches and organizations, but “realized rather quickly that leaving messages wasn’t going to get it done fast enough to get them somewhere for the evening. So I called our two wardens and said, ‘Look, I think we can do this.’”

The migrants were welcomed into the parish hall and church basement, where they had access to bathrooms, laundry facilities and a kitchen. During their stay, they were given meals, clothes and legal consultation. According to Vineyard Gazette reporter Brooke Kushwaha, Spanish-speaking students from the local high school were dismissed to go talk with the migrants and played ball games with them in the parking lot.

Scenes from the shelter. pic.twitter.com/x5pAnQcH06

Migrants and local high school AP Spanish students, who have been dismissed from school to help interpret, play a ball game in the Parish House parking lot to pass the time. pic.twitter.com/KsyRKsoslv

“We deplore the treatment of human beings as pawns in political disputes,” Gates wrote in a statement. “Unannounced relocations and family separations are not humane, nor do they promote constructive immigration policy debate. We are grateful to the people of St. Andrew’s and to the entire Martha’s Vineyard community for their compassionate response to people in need, and pledge our support of those efforts.”

Some of the migrants have told reporters they began the day at a shelter in San Antonio, Texas, where a woman approached them and escorted them onto an airplane she said would take them to Boston to get expedited work papers.

In reality, they were flown to Florida and then made stops in several other states before being dropped off on Martha’s Vineyard. The administration of Florida Gov. Ron DeSantis took responsibility for the flight, part of a campaign by Republican governors to ship migrants out of their states to areas with liberal attitudes toward immigration, without warning and often without the migrants knowing where they were or where they were going. DeSantis, Texas Gov. Greg Abbott and others have stated that they are sending migrants to areas with political and cultural significance – like Martha’s Vineyard, where former President Barack Obama, former Secretary of State John Kerry and other prominent Democrats own homes – in order to spite Democrats and protest their immigration policies. Two busloads of migrants were dropped off at the home of Vice President Kamala Harris on Sept. 15.

“We’re seeing this huge lack of transparency,” Lindsey Warburton, policy adviser at The Episcopal Church’s Office of Government Relations, told ENS. “People on Martha’s Vineyard had no idea that these people were coming or why they were coming. Fifty migrants may not sound like a lot, but when you look at an island town that’s not equipped for it, that doesn’t have an [Immigration and Customs Enforcement] field office, that doesn’t have immigration courts, this is an entirely different situation.”

The causes of the current situation are complex. In the past 10 months, Border Patrol agents along the Mexican border reported making over 1.8 million apprehensions, surpassing the previous yearly record of 1.66 million in 2021. However, because of the Trump administration’s Title 42 policy, migrants can be expelled immediately, which has led to a surge in repeated attempts to enter the U.S.

“Because of the lack of action from Congress on immigration reform broadly, we’re seeing these kinds of stunts become more and more common,” Warburton said.

Warburton said there has been a massive increase in migrants from Central and South American countries plagued by economic and political instability and violence, but especially Venezuela, Cuba and Nicaragua. Migrants from those countries cannot be deported to their home countries because their governments will not accept deportation flights.

“If you look at any of the news from any of these countries, you’ll see exactly why people are coming,” Warburton said. “We can’t return them – we shouldn’t, but we also can’t”.