[Episcopal News Service] North Texas is no longer a diocese of The Episcopal Church, but Episcopalians in North Texas are as active as ever – now as the Fort Worth-based North Region of the Diocese of Texas.

The two dioceses combined in July when their reunification was approved by bishops and deputies at the 80th General Convention in Baltimore, Maryland. The process is called “reunion” because both dioceses shared roots in the historic Diocese of Texas. 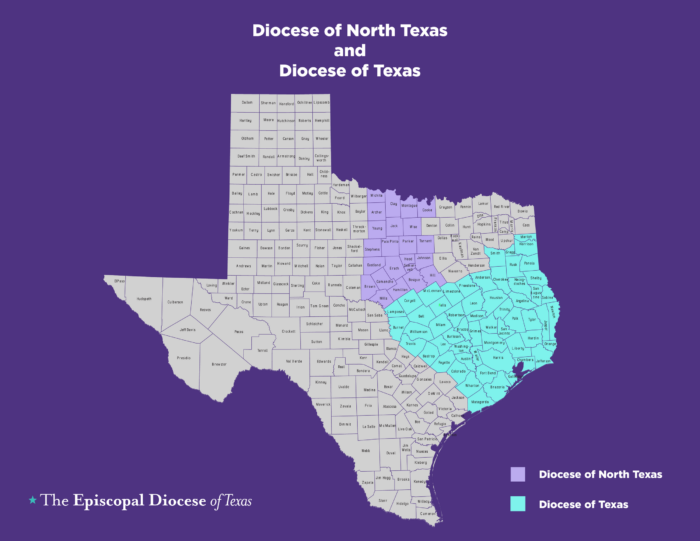 One of the most significant developments in the reunification has been the establishment of a new regional headquarters. The location of North Texas’ diocesan headquarters had been in flux since last year when the diocese lost its property lawsuit against a breakaway group. Now, the Diocese of Texas has signed a five-year lease on office space in downtown Fort Worth, and it will open the North Region’s offices there in the coming weeks.

“We continue to work through the various stages of this process, and all is going well,” Diocese of Texas Director of Communications Tammy Lanier told ENS. “People [in the North Region] are being invited to participate at different levels of governance until elections may be held. … We are helping to find space and facilitate growth.” 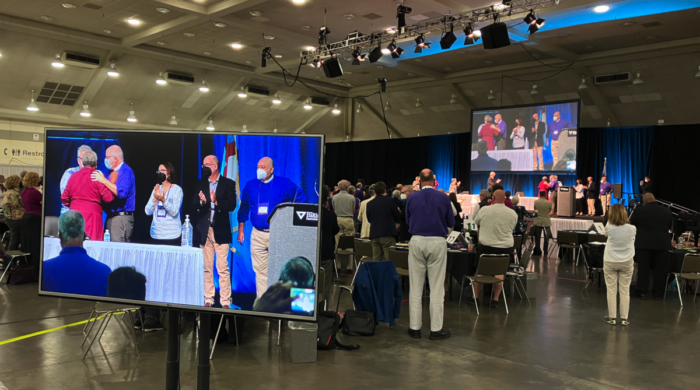 Bishops from the reunited dioceses of Texas and North Texas join Presiding Bishop Michael Curry on the podium after the House of Bishops adopted the resolution the dioceses’ reunion. Photo: David Paulsen/Episcopal News Service

The General Convention vote in favor of the reunion brought to a close a tumultuous nearly 14-year chapter in the history of the Episcopal Church in North Texas, formerly the Diocese of Fort Worth, which had been greatly diminished by a schism over theological differences.

In 2008, a majority of clergy and lay leaders in the Diocese of Fort Worth voted to leave The Episcopal Church over disagreements about the ordination of women and LGBTQ+ people. In a protracted lawsuit over church property worth more than $100 million, the Texas Supreme Court sided in May 2020 with the breakaway group, now aligned with the Anglican Church in North America, or ACNA.

In February 2021, the U.S. Supreme Court announced it wouldn’t review the case, letting ACNA’s victory stand, and in April 2021, the rest of the Episcopal diocese’s congregations were ordered to vacate or chose to move out of the buildings that had been awarded to ACNA.

With 14 congregations and fewer than 4,000 members, North Texas had been in talks with Texas leaders at least since January 2022. The North Texas Standing Committee voted in April to formally engage in reunification discussions with Texas, and the two diocese’s governing bodies voted in favor of the plan in June.

Now, as members of the combined diocese, clergy from the North Region will be invited to Camp Allen in October to attend the Diocese of Texas’ clergy conference for the first time, for fellowship and to celebrate the reunification, Lanier said. Plans also are under way to invite North Region congregations’ leaders to the Texas Diocesan Council in February.

The Houston-based Diocese of Texas is one of the largest dioceses in The Episcopal Church, with 167 congregations and 72,000 members before the reunion. Northwest Texas Bishop Scott Mayer, who had been serving as bishop provisional of North Texas, continued assisting the new North Region of the Diocese of Texas after the reunion. Lanier said Texas Bishop Andrew Doyle is consulting with Episcopalians there about discerning a search for a permanent assisting bishop to serve that region. The diocese has three other regions, each served by a suffragan or assistant bishop.

Other upcoming opportunities for joint participation in diocesan events include an altar guild retreat, the fall retreat of Texas’ Small Church Network and a retreat for retired clergy and spouses.

Sherrod said North Region Episcopalians were grateful for the boxes of welcome gifts that the Diocese of Texas recently sent to each of the North Region’s congregations. The boxes included items like tote bags, portable phone chargers and baseball caps.

“While the items were certainly beautiful and useful, it was the thoughtfulness and the warmth of the welcome from the bishops, staff and people of Texas that touched everyone so deeply,” Sherrod said. “That warmth has been a constant in this exciting time of transition. We all are still learning about each other, a process that is proceeding with much good humor and great grace.”