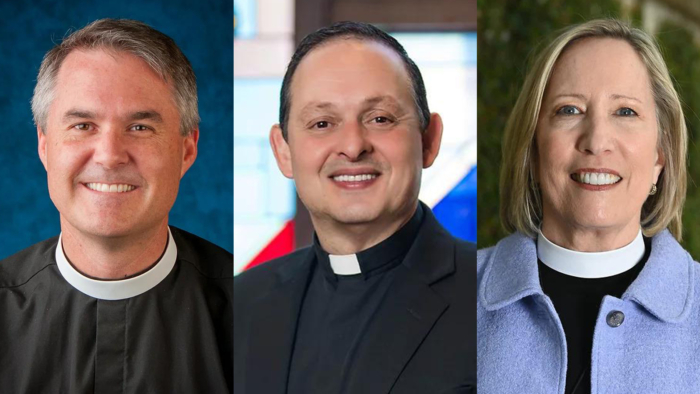 From left, the Rev. Charlie Holt, the Rev. the Rev. Miguel Rosada and the Rev. Beth Tjoflat are the three candidates on the slate of the new election for Florida bishop coadjutor announced on Sept. 13. Photos: Diocese of Florida

[Episcopal News Service] The Diocese of Florida Standing Committee has set Nov. 19 as the date for a new special convention for electing a bishop coadjutor, after the diocese tossed the results of a previous election that had been marred by procedural issues, according to a Sept. 13 announcement.

The Jacksonville-based diocese will hold the in-person election at Camp Weed in Live Oak. The new candidate slate lists three of the five priests who were on the ballot in May for the diocese’s first attempt at an election. The candidates are the Rev. Charlie Holt, the Rev. Miguel Rosada and the Rev. Beth Tjoflat. The diocese also will consider additional nominations through a petition process until Oct. 3.

Holt, who previously served as an associate rector at the Church of St. John the Divine in Houston, Texas, initially was declared the winner of the May 14 election. Afterward, a complaint was filed objecting to that result, and last month, the churchwide Court of Review essentially sided with the objectors. It concluded that “a clergy quorum was not reached” in accordance with the diocese’s official election process, and “the action of the diocese in changing its manner of voting two days prior to the election was fundamentally unfair to the delegates of the convention and the candidates.”

Holt responded Aug. 19 by withdrawing his acceptance of the May election’s result, and a week later, on Aug. 26, Bishop Samuel Howard announced the diocese would hold a second bishop coadjutor election.

Howard had called for the election of a bishop coadjutor because of his plans to retire by fall 2023. He will reach the church’s mandatory retirement age of 72 next year. The bishop coadjutor would then be installed as the next diocesan bishop.

While his election was under review, Holt was welcomed as a member of the diocesan staff on Aug. 1 in a role intended to enhance and expand the diocese’s prison ministry; support local Episcopal schools; help to plan the future of the diocese’s camp and conference center; and support other programs.

In the May election, Holt was declared the winner on the third ballot with 64 clergy and 80 lay votes. Tjoflat was runner-up with 52 clergy and 42 lay votes. A central objection to the result was that the diocese had made a last-minute change to allow clergy to participate remotely while lay delegates had to appear in person. In its Sept. 13 announcement of a new election, the standing committee said physical attendance will be required to participate, with no online or hybrid option.

A final slate, including any petition candidates, is expected by Nov. 2, and the diocese plans to organize one meet-and-greet with the candidates on Nov. 12.

“This letter intentionally offers only the facts about the upcoming election,” the standing committee said in its announcement. “You may anticipate a message soon from the Standing Committee answering many of the questions and rumors swirling around this situation.”