[Episcopal News Service] The Diocese of Long Island is paying homage to Bishop John Henry Hobart, the bishop of New York when the state was all one diocese, with an event focused on diversity and inclusion.

Hobart, whose Episcopal feast day is celebrated on Sept. 12, served as diocesan bishop of New York from 1816 until his death in 1830, and is remembered in the church’s Lesser Feasts and Fasts as “one of the leaders who revived The Episcopal Church, following the first two decades of its independent life after the American Revolution.” He also was instrumental in founding the college that now bears his name, Hobart College, in Geneva, now within the Diocese of Central New York. 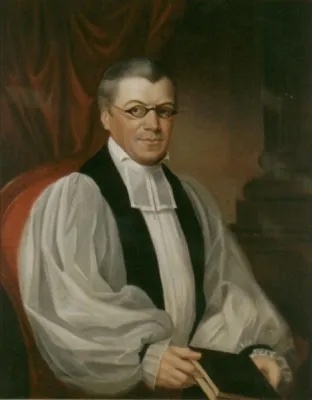 The Diocese of Long Island is timing its event with the bicentennial of Hobart College’s 1822 founding. It will feature a panel discussion on Sept. 25 that will focus on issues of diversity and inclusion since Hobart’s era. Hobart’s own record on inclusion illustrates how complicated such issues have been historically, the diocese said in its news release announcing the event.

“His inclusive theology led Hobart to consecrate the first chapel for a Native American congregation and found the first Black church in New York State,” the news release says. “However, the bishop neither understood nor valued Native American institutions and he eschewed secular politics and the debate over the abolition of slavery to avoid dividing Episcopalians.”

Presiding Bishop Michael Curry, who was elected The Episcopal Church’s first Black presiding bishop in 2015, is a 1975 graduate of Hobart and William Smith Colleges. He will deliver opening remarks for the Sept. 25 event by video.

“In looking at the complex legacy of someone like Bishop Hobart, I’m mindful of the need for humility,” Curry says in the video, provided to Episcopal News Service in advance. “The truth is there is a saint and a sinner dimension in every one of us, in every human child of God who has ever walked upon the face of the Earth.”

At the same time, “we must tell the truth. We must face the truth, in all of its manifestations,” he said.

Panelists will include the Rt. Rev. R. William Franklin, retired bishop of Western New York; the Rev. Craig Townsend, historian-in-residence for racial justice in the Diocese of Long Island; Michael Leroy Oberg, history professor at the State University of New York-Geneseo; the Rev. Nita Byrd, chaplain and dean for spiritual engagement at Hobart College; and the Rev. Patrick Cheng, visiting professor of Anglican studies at the Episcopal Divinity School at Unity Theological Seminary in New York.

The event will be held in person at 3 p.m. Eastern at St. Ann & the Holy Trinity Church in Brooklyn. It also will be livestreamed on the church’s YouTube channel.

Hobart College was originally known as Geneva College, located on the north shores of Seneca Lake. It was founded on traditional land of the Seneca Nation. The bishop, in his travels around New York, saw Geneva, with a population of 1,700, as an ideal place for a college that would provide a “stronghold for the church in the West,” according to the college’s bicentennial page.