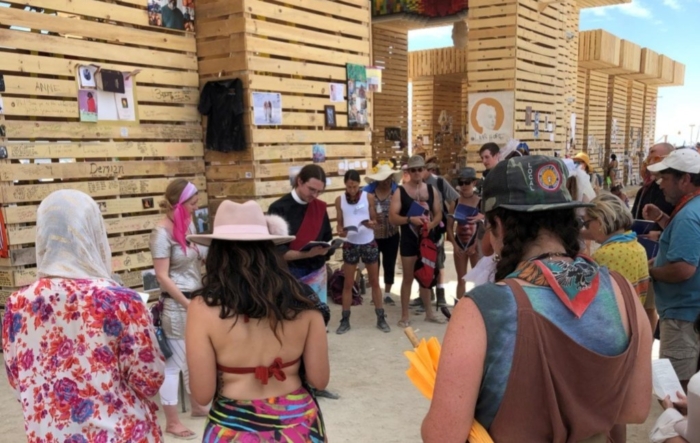 [Episcopal News Service] The annual Burning Man festival in northwest Nevada is known as a week of creativity and dusty debauchery in the desert, a place where more than 70,000 fellow travelers build a temporary artistic community structured on communal support and the offering of gifts to strangers – before vanishing without a trace after Labor Day.

Although it’s not known for being hospitable to organized religions, Burning Man attendees, or “Burners,” often describe participation as a kind of spiritual experience. “Burning Man is part of me becoming a priest,” the Rev. Alex Leach, who serves in the Sacramento-based Diocese of Northern California, told Episcopal News Service. He first attended the festival in 2011. “The overwhelming sense I had is, this place is just saturated in God.”

Could this inherent spirituality provide an opening for the practice of Christian rituals in Nevada’s Black Rock Desert?

Leach and a group of other clergy and lay leaders, many of them Episcopalians, have answered that question affirmatively. In 2018, he and three others launched a Christian camp at Burning Man centered on daily worship and faith conversations. And last week, when Burning Man returned to an in-person festival after a two-year pandemic hiatus, Leach’s camp again was among the more than 1,000 themed camps spread across the desert plane, known to Burners as the Playa.

The Christian camp, which has an official name that is not fit for publication on this website, features a small chapel housed in a geodesic dome and an adjoining tent that serves as a kind of church living room. The camp’s 18 members represent a range of Christian denominations and offer morning prayer services, afternoon clergy hours and a daily Eucharist at noon in front of Burning Man’s central Temple structure.

Critical to the camp’s mission is providing Burners with opportunities for spiritual enrichment through a nonjudgmental form of Christianity, with no attempts at proselytization, camp member Michelle Booth, a lay Episcopalian from Virginia, told ENS.

“People would come in and say, ‘what are you guys all about?’” Booth’s response was simple: “We are here to give love and receive love. That is the essence of what we’re all about.”

Booth’s brother, the Rev. Brian Baker, was one of the founders of the Christian camp at Burning Man. Baker, now retired, was serving as dean of Trinity Cathedral in Sacramento in 2015 when his daughter invited him to join her at Burning Man.

“I got converted to the Burning Man world and realized that the kind of community I had been trying to create in the church, with moderate success, was alive there,” Baker told ENS.

After returning to Sacramento that first year, he preached at the cathedral on his experience at Burning Man, and a recording of the sermon went viral among Burners. Other Episcopalians who attended Burning Man reached out to him, and they started a Facebook group to communicate with each other.

At Burning Man in 2016, Baker led Eucharist next to the Temple – which, featuring a signature multistory wooden figure, is burned to the ground at the end of each year’s festivities. After the Eucharist, several people asked Baker if additional services were planned. Baker was astonished by the positive reaction.

“Never on Sunday morning has someone come up to me and asked if they could come back tomorrow because the experience was so moving,” he said.

Baker and other Burners from Trinity Cathedral began talking about creating an official themed camp. At that time, Leach was completing his field education for the priesthood at the cathedral. He now serves as priest-in-charge at St. Luke’s Episcopal Church in Woodland. Charis Hill, a cathedral parishioner at the time, also signed on to the project, as did Annie Dunlop, a Roman Catholic layperson who had heard Baker talk about Christians at Burning Man on a podcast.

Those four launched their Burning Man camp in 2018 with a few additional camp members. They chose an official camp name that would be “true, but not scary,” Baker explained. “Because we knew there would be a lot of skepticism at Burning Man of a Christian camp being there.”

With such a small team, they struggled to get their footing that first year, and Burning Man isn’t a vacation any year, Leach said. They were offering Christian hospitality in an otherwise inhospitable natural environment, where wind-blown dust and sand can be oppressive and daytime temperatures frequently top 100 degrees. Even so, “this is a place to go and serve and be transformed,” he said.

Baker said camp began thriving in 2019, when it expanded to 17 members. Now, “we are a well-valued and respected member of Black Rock City at Burning Man, and we get people coming over to us and thanking us for the service that we are providing for the city,” he said.

Such a service may seem an odd fit among Burners, most of whom report no religious affiliation in the festival’s annual in-house census. Only about 13% identify as Christian, even fewer as religious. But Leach is particularly drawn to the data showing that nearly half of all Burners describe themselves as not religious but “spiritual.”

“I think we know that ‘spiritual but not religious’ people are constantly in relation with religions,” Leach said, especially Eastern religions. Though most Burners may not feel a connection with the Christian church, Leach sees the Burning Man camp  as a way for Christians to be part of the active spiritual conversations at Burning Man. 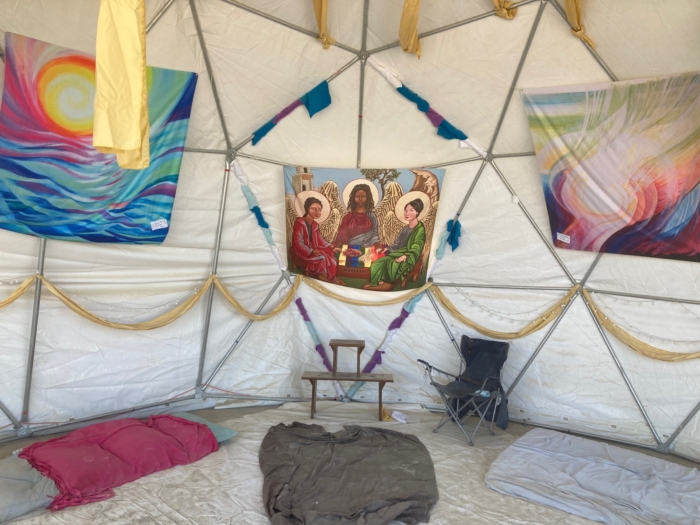 The camp’s morning prayer services typically draw about 10 to 15 worshipers. About 60 to 70 people join them for Eucharist at noon at the Temple, Leach said. The services are modeled after mainline Protestant liturgies, but they are modified somewhat for Burner sensibilities – avoiding language like “lord” or the pronoun “he” for God, for example.

In the afternoon, Leach or one of the other clergy members at the camp offers a kind of office hours, when anyone at Burning Man can come and talk about faith.

The few self-identifying Christians at Burning Man say they appreciate having a place where they can blend their Christian and Burner identities, Baker said. Others know nothing about Christianity and want to learn. And some people who visit come to express their rage toward the church because of past traumatic experiences.

The camp is “an offer for healing for people who have been wounded by the church,” Baker said.

His camp’s practice of Christian rituals also “helps deepen their Burning Man experience,” Baker said. In addition to the daily worship services, one of the Eucharists doubles as a memorial service, for Burners to say goodbye to loved ones lost in the previous year.

This year, Baker helped set up the camp and stayed through Aug. 30 but left early due to concerns about COVID-19 transmission at Burning Man. Before leaving, he attended Eucharist, which brought him to tears. “It was just so moving to be there,” he said.

The camp’s team also offers Burners an optional blessing, written by Baker specifically for Burning Man: “The world now is too dangerous and too beautiful for anything but love,” it begins. The clergy or lay leader proceeds to bless the person’s eyes, ears, hands, lips, feet and heart.

“We all had many powerful interactions with people,” Booth, the lay Episcopalian from Virginia, told ENS after returning from this year’s Burning Man. In addition to helping with the Christian camp, she volunteered as one of the official Temple guardians, a role kind of like a security guard, with shifts throughout the week. One of her shifts was during the Eucharist, and she saw a woman nearby crying.

Booth asked the woman if she would like a blessing, and the woman said yes.

Organizers of the Christian camp also see it as a unique evangelism case study, not focused on conversion but on sharing Christian spirituality outside the walls of the traditional church setting. To that end, Leach secured a grant from the Episcopal Evangelism Society in 2019 to create a Burning Man prayer book for the festival.

“I’m trying to communicate something about the church and the church’s presence here and Christ’s presence here,” Leach said. It’s important to Leach to not simply look like a priest at Burning Man, but to be part of the community. It allows him to experiment with “these sorts of ways that we invite people to engage in Christian ritual, engage with Christian ideas, without having to go inside a physical church as the first step.”