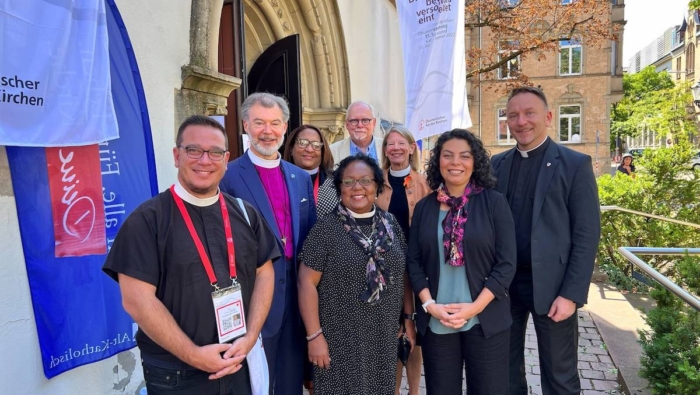 The Episcopal Church’s delegation posed for a photo following the Sept. 4 service at St. Columban’s in Karlsruhe, Germany. From left, the Rev. Yoimel Gonzalez Hernandez, a delegate and associate rector of St Alban’s Episcopal Church in Washington, D.C.; Convocation of Episcopal Churches in Europe Bishop Mark Edington; the Rev. Milquella Mendoza, a delegate and vicar of Iglesia San Esteban in San Pedro De Macoris, Dominican Republic; the Reverend Deborah Jackson, delegate and associate dean for community life at the University of the South’s School of Theology in Sewanee, Tennessee; the Ven. Walter Baer, of the Convocation of Episcopal Churches in Europe; the Rev, Margaret Rose, ecumenical and interreligious deputy to the presiding bishop; Julia Ayala Harris, delegate and president of the House of Deputies; and, the Rev. Robert Vukovič, vicar of Saint Columban’s.

[Episcopal News Service] Delegates representing The Episcopal Church at the World Council of Churches 11th Assembly, which concluded Sept. 8 in Germany, experienced the broad diversity of Christianity represented across the world, discussing churches’ responses to social problems and meeting European Anglicans and Episcopalians.

“My experience … can be summarized by the words ‘celebration’ and ‘opportunity,’” said the Rev. Yoimel Gonzalez Hernandez, a delegate and associate rector of St. Alban’s Episcopal Church in Washington, D.C. “The Assembly has been a wonderful experience of celebration of the diverse face of the Christian church around the world, while [also] recognizing the richness of our traditions and the presence of the Holy Spirit in those who worship the same God in other ways.

“The Assembly has been also a wake-up call about the opportunities The Episcopal Church has in expanding the ecumenical efforts in our congregations and dioceses as a way to better serve others around us,” Hernandez told Episcopal News Service. “Personally, I attended four sessions of the ecumenical conversation about human sexuality, which gave me a better understanding of how this topic continues to be difficult and needed for the World Council of Churches, as well as for our church.”

The Assembly – held about once every eight years and described as “the most diverse Christian gathering of its size in the world,” with representatives from 352 Protestant and Orthodox member churches – met from Aug. 31 through Sept. 8 and focused on the theme, “Christ’s love moves the world to reconciliation and unity.”

“I have been deeply moved by the many thematic presentations and small group discussions, and especially the diverse worship experiences,” said the Rev. Deborah Jackson, associate dean for community life at the School of Theology at the University of the South in Sewanee, Tennessee. “I have also been encouraged by the business plenaries where the Assembly has discussed the challenges we all face in our various contexts. A few topics required more discussion than others, but what was the most apparent was the delegates’ passion and hope for spreading the love of Christ to make the world a better place.” 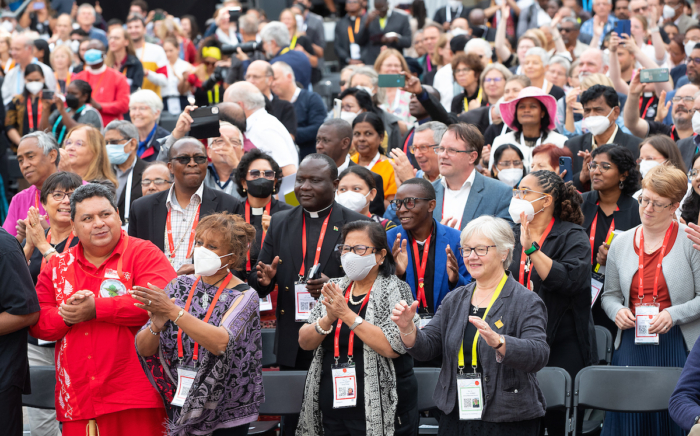 Its location in Karlsruhe offered a chance to connect with an Episcopal community there. The Convocation of Episcopal Churches in Europe has a mission congregation in Karlsruhe, St. Columban’s, which worships at Christi-Auferstehungs-Kirche, a parish of the Old Catholic Church of Germany. (Unaffiliated with the Roman Catholic Church, most Old Catholic churches in Europe are in full communion with The Episcopal Church.)

On Sept. 4, the Episcopal delegates celebrated a worship service jointly hosted by St. Columban’s and Christi-Auferstehungs-Kirches. The service was conducted in English, German, French, Dutch and Tagalog, with the participation of Bishop Antonio Ablon of the Independent Philippine Church; Bishop Robert Innes of the Church of England’s Diocese in Europe; and Bishop Mark Edington of the Convocation, who preached.

In his sermon, Edington described the event as an “incredible gathering of Christians from all over the world,” one that hasn’t been held in Europe since 1968. He then took up the day’s Gospel reading, Luke 11:26, explaining its context in the larger story of what it takes to become a disciple of Jesus.

“There is no such thing as a disciple who does not sacrifice something—not just anything, something precious. If you have come this far along the road of your faith without having to give up something you would rather have kept, you have not heard this message.”

Those possessions, might well be some “fondly held convictions,” like judgments of other people, cultures and communities, he said, or “our preferences, our privileges, our preconceived notions about the shortcomings of others and the righteousness of our own ideas.”

On Sept. 7, Archbishop of Canterbury Justin Welby addressed the assembly, speaking about how the theme of the WCC Assembly echoed the theme earlier in the summer of the Lambeth Conference, “God’s Church for God’s World.” Welby commented on the ways in which the Anglican bishops who participated in the Lambeth Conference were able to move forward despite differences.

“We found our way forward through, not by solving the issues, but by living in the light of Christ – by saying we do not agree, by being honest without excluding one another,” he said. “At the beginning, many felt they could not participate. By the end almost all did.”

Welby also participated in a press conference with Roman Catholic and Orthodox leaders on the topic of Christian unity, urging Christians to abandon the idea of “competitive churches.”

“Unity does not mean a united bureaucracy or even a united hierarchy, or style of worship or common cultural assumptions,” Welby said. “It means a profound love for one another that receives each other at the Lord’s table.”

The duty of churches and governments to avert catastrophic climate change has been a primary focus of the Assembly.

“The urgent issues of today — climate change, racial, Indigenous, gender justice and equity, wealth and poverty, peace — and the call of the Gospel to address them, were magnified at the Assembly where we heard the stories of those directly affected from all over the world,” said the Rev. Margaret Rose, Presiding Bishop Michael Curry’s ecumenical and interreligious deputy, and the adviser to the delegation.

The Climate Group of the Ecumenical Youth Gathering had been meeting daily to share stories of how the climate is changing in their regions of the world and to plan a strike to draw attention to the crisis.

“There is a desperate cry in all regions for action to stop the climate crisis that we are already experiencing today,” said Milquella Mendoza, a delegate and vicar of Iglesia San Esteban in San Pedro De Macoris, Dominican Republic, who took heart in the gospel-rooted ecumenical dialogue leaning toward reconciliation.

“There is a great cry in the youth who want to be part [of this movement]. It is time to open spaces for youth to find a place to be part of the solutions and not live isolated in the face of so many conflicts that affect them, directly and indirectly, today, and also in the future,” she said.

Members of the WCC working group on climate change, in a press conference on Sept. 1, expressed the urgent need for action, pointing to current conditions in their home countries that may predict much worse circumstances to come in the near future. Indigenous peoples, they said, are especially affected.

“We’ve seen the climate crisis coming for a long time,” said Julia Rensberg, delegate from the Church of Sweden and Indigenous representative of the Saami Council within the church.

In a press conference on Sept. 5, Archbishop Yevstratiy of Chernihiv and Nizhyn said that the Orthodox Church of Ukraine had applied to become a full member of the WCC and the Conference of European Churches. The church formed over the past three years as an offshoot of the Russian Orthodox Church but broke ties with Russia after the invasion of Ukraine.

Yevstratiy said the invasion caused the most dangerous security situation the world has faced since World War II and noted that that war led to the formation of the WCC. It is critical, he said, “to find a way to be much more united as Christians.”