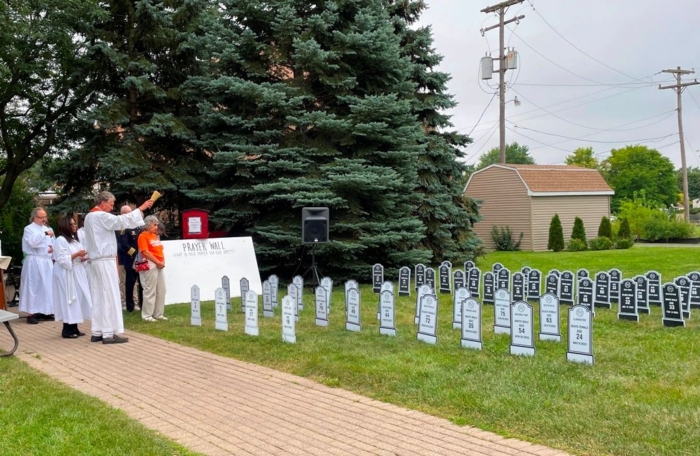 [Episcopal News Service] An Episcopal church in suburban Detroit, Michigan, has transformed its back lawn into a public anti-gun violence exhibit, with rows of gravestone signs memorializing all gun death victims in Oakland County this year.

The new exhibit was unveiled Sept. 4 at an outdoor worship service at St. David’s Episcopal Church in Southfield. It features dozens of printed gravestones, each with the date of death, the community, the age of the victim and the victim’s race and gender. Displayed in front, white markers represent children killed by guns, followed by gray markers memorializing adult homicide victims. Rows of black markers in the back represent suicide victims.

The display already has raised eyebrows – and raised awareness of the problem of gun violence – among parishioners at St. David’s, said the Rev. Chris Yaw, the church’s rector. “I could see lightbulbs going on,” Yaw told Episcopal News Service. “There were parishioners who said, ‘I never thought it was like this.’”

Some suburban residents may think of gun violence as a Detroit problem, Yaw said, but that narrow perception is undercut by the memorial to victims in Oakland County, which borders Detroit to the north. Across the state, an average of more than three people a day have died by firearm since 1999, according to a report by MLive. Wayne County, which includes Detroit, logs the most total gun deaths and per capita death rates, while several less-populated counties in northern Michigan and the Upper Peninsula have per capita rates nearly as high.

In Oakland County, an average of more than 90 people a year died by gun in the past two decades, a large majority by suicide. And though the St. David’s memorial only marks deaths since January 2022, the county also suffered a mass shooting in November 2021 at Oxford High School, where a gunman shot and killed four students and injured seven other people.

St. David’s created a similar outdoor exhibit last year drawing attention to the many African Americans nationwide who have been killed by police and white vigilantes. This year, church leaders wanted to help turn the congregation’s and community’s attention toward gun violence, part of the Diocese of Michigan’s involvement in the End Gun Violence Michigan campaign.

Michigan Bishop Bonnie Perry has been a leading voice for End Gun Violence Michigan, and she praised the work of St. David’s to engage parishioners and residents on the issue. She also noted that the church now is working with county and city officials to support a community gun buyback effort planned for October.

“It’s a powerful interweaving of prayer, public witness and community partnerships, exactly the activity in which I long for our communities of faith to be engaged,” Perry told ENS. She was among the religious and governmental leaders who attended the Sept. 4 service where the gravestone exhibit was unveiled.

Yaw said some members of his congregation initially weren’t sure the church should devote its back lawn to an anti-gun violence display, though “I think once they saw it, they understood it.” Such memorials have been effective tools used by other churches to help visualize the toll of gun violence in their communities, notably the “murder board” that has been maintained for years by St. Anna’s Episcopal Church in New Orleans, Louisiana. 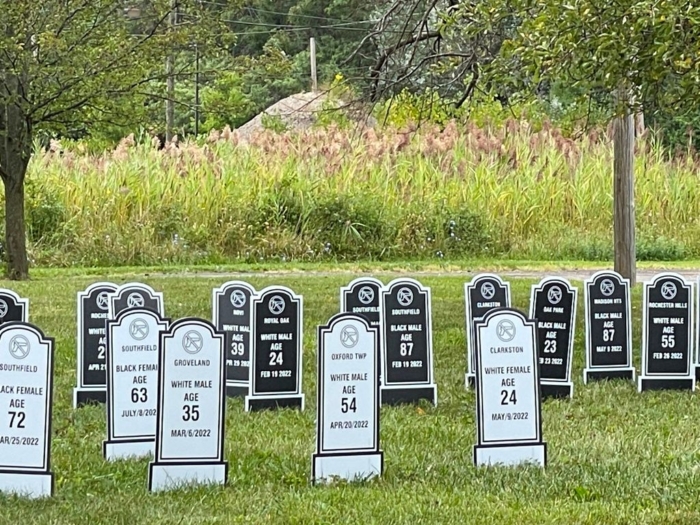 The gun death memorial at St. David’s Episcopal Church in Southfield, Michigan, features dozens of printed gravestones, each with the date of death, the community, the age of the victim and the victim’s race and gender. Photo: Joanne Keifer Sackett, via Facebook

One of the purposes behind St. David’s gravestone display was to guide the congregation in taking its first step toward participation in the End Gun Violence Michigan campaign. It was started this year by a coalition of faith-based and secular organizations to advocate what they say are popular, common-sense gun-safety measures, such as universal background checks, safe gun storage requirements and prohibitions on guns in the state Capitol and other government buildings.

“If our legislators fail to act, then we are considering a ballot initiative in 2023, which will take the proposed laws directly to the people of Michigan,” Perry said.

On Sept. 8, End Gun Violence Michigan will hold an online interfaith service at 7 p.m. Eastern featuring prayer, perspectives and a call to action. Bishop Prince Singh, bishop provisional of the dioceses of Eastern and Western Michigan, will be one of the speakers in the Zoom service, which was organized in partnership with Southwest Michigan Interfaith Action.

For St. David’s, participating in a gun buyback event was a logical next step in extending its engagement with the issue of gun violence, Yaw said, an idea partly inspired by similar efforts launched this year by other Episcopalians. When Yaw started contacting local officials with the idea, he learned of a county-led buyback effort already underway. The county approved $45,000 for the initiative, which will invite gun owners to voluntarily turn in their guns in exchange for gift cards.

Yaw now is talking with leaders in Southfield about ways St. David’s can get involved next month, possibly by offering space for police to receive relinquished guns. The lesson for congregations, he said, is that every bit of support for gun safety can make a difference.

“The solution to one big problem is never one big answer,” he said. “It’s a million little answers.”