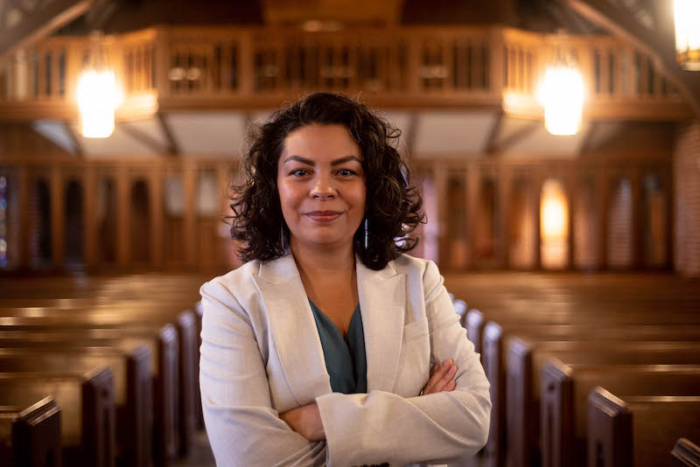 [Episcopal News Service] Julia Ayala Harris’ election as president of the House of Deputies at the 80th General Convention in July was imbued with the energy of historic change. She is the first woman of color — the first Latina — and at age 41, the youngest president in recent memory, elected from the youngest and most diverse slate of candidates ever. A former Roman Catholic, Ayala Harris brings the perspective of a convert who discovered The Episcopal Church as an adult.

Ayala Harris’ path to one of the highest-ranking positions in The Episcopal Church has been a personal and spiritual journey going back two decades. In her 21 years as an Episcopalian, the self-described “church geek” ascended through the church’s leadership, giving her an extensive résumé. She has served twice as a deputy from the Diocese of Oklahoma, a six-year term on Executive Council and over a dozen other leadership positions within The Episcopal Church and her diocese. She has also represented the Anglican Communion at the 2016 United Nations Commission on the Status of Women and is currently representing The Episcopal Church at the World Council of Churches 11th Assembly in Germany. 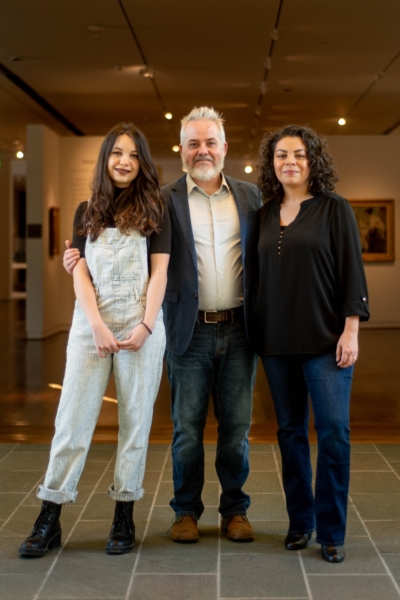 Ayala Harris, a first-generation Mexican American whose father was an undocumented immigrant, has managed nonprofit organizations around the U.S. and beyond. Among them are programs that provide transitional housing for homeless women and children, permanent supportive housing for people with disabilities, access to the arts, alternatives to incarceration for pregnant women and mothers. From 2005 to 2008, she was an international aid worker in Kenya and South Sudan with Church Ecumenical Action, supporting South Sudanese faith-based nonprofits and dioceses in grant writing, financial management and program design.

She is currently working on a doctorate focusing on faith-based nonprofit leadership – especially public perceptions of nonprofit leaders based on their race, gender or ethnicity – at the University of Oklahoma, where her husband, John, teaches regional and urban planning. They live with their teenage daughter, Izzy, in Norman, Oklahoma, where they enjoy spending time in nature, puzzles and board games, and above all, anything “Star Trek”-related.

This interview has been edited and condensed for clarity and length.

ENS: What’s your spiritual background? How did you come to The Episcopal Church?

Ayala Harris: I grew up in the Catholic Church, in the Diocese of Chicago, in the ‘80s. I adored going to church. I was an acolyte, and my first job, when I was 13, was to work in the parish office to answer phones and sort the mail and that sort of thing. 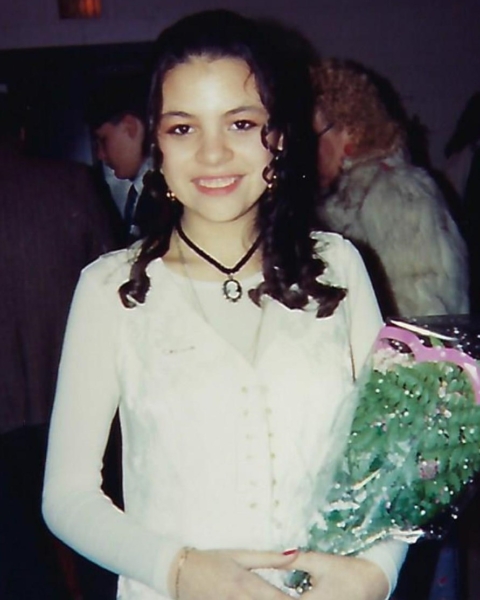 When I was a teenager, I had a big crisis of faith. And that had everything to do with giving birth to a baby boy that I placed for adoption. I was going to just tell you it was a spiritual awakening, but it’s both a crisis of faith and a spiritual awakening at the same time. And when I came back to my Catholic church after that, there wasn’t a place for me. There was hardly a place for teenagers at all, let alone a teenager who had been through this very adult experience.

So I found myself going to an evangelical youth group and was able to go find pathways to leadership and be spiritually nourished, and that’s where I got to learn a lot more about the Bible and pick up on biblical literacy. And then I went to an evangelical college and realized that I was still searching, that I hadn’t found a church home. I was still a square peg looking for a square hole but kept finding round ones and I didn’t feel like I belonged.

I had a classmate and a professor who both were Episcopalian. And there was something about their worldview and the way they talked about things that I appreciated, and I walked into an Episcopal church and received Communion from a woman priest. And I was completely blown away by women being allowed to be priests and pastors, and the deeper I went into The Episcopal Church, the more I realized that I was at home and I think that I’ve been Episcopalian my entire life. I just absolutely fell in love.

ENS: You worked your way up into the leadership of the church quickly. Are you naturally inclined toward leadership roles, or was that a journey of self-discovery too? 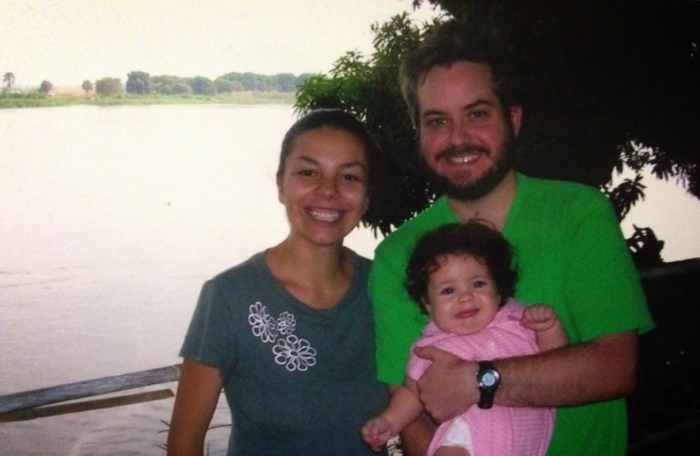 Ayala Harris: Oh, interesting. I’m not sure. I think I am inclined toward leadership roles, because I’ve been an executive director of different nonprofits. But in The Episcopal Church, when I start doing work – whether it’s committee work or an interim body or putting together a ministry program – there’s something in that that I think I feel called to and I’m passionate about, and I just lose track of time. I just love it so much. I think that I am a leader generally, and that I’m called to leadership roles in the wider context, but that perhaps my vocation is really in Episcopal leadership. I just do really enjoy it and I could just keep doing it. It’s not something that has felt like a chore to me.

ENS: You’ve talked about the significance of being the first woman of color and the first Latina president of the House of Deputies. How do you think that’s going to impact how you lead?

Ayala Harris: There’s so much that comes with embodied representation. I embody the representation that we hope to see in leadership in the church that [former] President [Gay Clark] Jennings has worked so hard to promote.

One of the priorities that I have for my leadership is to continue to expand who is in leadership in the church. Mostly that’s done through making appointments [to church leadership bodies], but also by providing an example of the types of goals we already have in leadership. I think it is interesting when people see just how diverse Executive Council is, because they’re seeing the top leaders of the church and we’re reflective of the diversity of the church, or even more so. 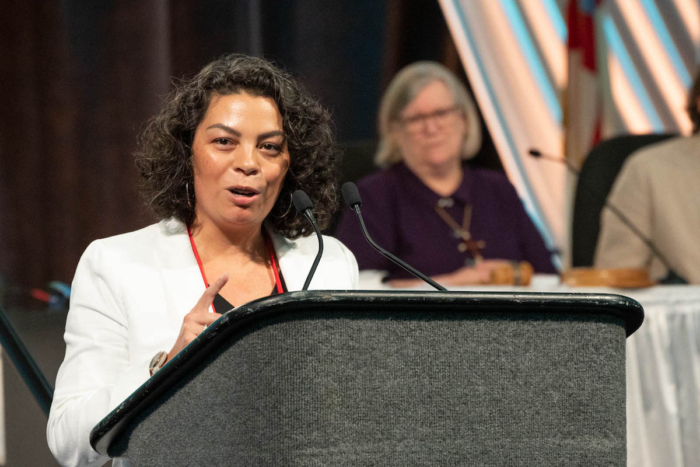 Julia Ayala Harris addresses the House of Deputies after her election at the 80th General Convention in Baltimore, Maryland, as the Rev. Gay Clark Jennings, the outgoing president, listens. Photo: Scott Gunn

ENS: What are your other priorities?

Ayala Harris: The themes that I’ve kept coming back to are accessibility, inclusivity and safety. Examples would be making our governance structures – like General Convention and other pieces of the churchwide structure that the president of the House of Deputies has oversight over – to be more accessible to more people. That can include the nature, structure, scope and length of General Convention, but also things like wheelchair accessibility and sign language and captioning as well as child care and children’s programming.

A lot of that overlaps with the inclusivity piece, because if you’re able to have better access, you’re going to be a little bit more inclusive. Inclusivity means that once you get people there, you want to have them feel the sense of belonging, they belong in those spaces. So not only have you welcomed them and made it more accessible, but you’re including them and they feel that belonging.

Safety is related to my work as deputy chair of [the General Convention Committee on] Sexual Harassment, Sexual Exploitation and Safeguarding. If we’re going to be making our church structures more accessible and more inclusive, then we also have to ensure that we’re bringing them into safe spaces and that we’re taking care of them. I’m also working on how I can implement these themes in both structural changes but also in cultural changes that need to be made in The Episcopal Church.

ENS: What’s your understanding of the role of president of the House of Deputies? There are constitutional duties, of course, but beyond that, what does this job mean to you?

Ayala Harris: That one’s like an essay question on a final exam! Beyond presiding over the House of Deputies during General Convention and being vice chair of executive council and being vice president of the Domestic and Foreign Missionary Society, the president of the House of Deputies has this tremendous ability to make appointments, which is an amazing opportunity to expand who is in leadership. … I don’t want to overstate this too much, but being someone who represents the voices of clergy and laity in the church is very important and a huge honor.

It’s one thing to have watched President Jennings do this role for the last seven years so closely, and it’s a whole other thing to be doing it. I’m new in the skin of the president and it’s thrilling and scary all at the same time. But with a lot of help and everyone’s prayers, I hope to be able to live into it.