St. John’s, Chico, uses part of its seven-acre property to grow flowers and vegetables for use by a local nonprofit organization that serves people who are homeless or living in poverty. Vegetables are added to food bundles, and flowers are sold by clients through one of the group’s programs. Photo: Alan Rellaford

[Episcopal News Service] The Episcopal Diocese of Northern California is urging its churches to undertake community partnerships, with a special emphasis on how church land is used for the benefit of others – and it’s something the bishop has asked about during each visitation.

“I just kept finding community garden after garden,” Bishop Megan Traquair, who has led the Sacramento-based diocese since June 2019, told Episcopal News Service. With the proliferation of gardens, she felt it was important to find ways to encourage and connect them, particularly in a mostly rural region, where agriculture, rice paddies, cattle ranching, fishing and aquaculture, vineyards and fruit and nut orchards provide many members’ livelihoods.

The diocese is large – stretching from the north end of San Francisco Bay to the Oregon border, and from Nevada to the Pacific Ocean – and has a unique geography, “where wine and redwoods and rice and almonds all grow within the same land, essentially,” Traquair said.

While congregations are mostly small – only seven of the diocese’s 68 churches have an average Sunday attendance greater than 70 – many have large properties.

“When a lot of our churches were built, land was really cheap, so they bought a lot of land,” the Rev. Julie Wakelee, canon to the ordinary, told ENS.

Care of the creation has been a tenet of official Episcopal Church policy since the 1990s, spurred on by a 1988 Lambeth Conference resolution that called stewardship of the earth “a necessary part of Christian discipleship.” For many congregations, creating community or church gardens has been one way to manifest this care, which in part inspired The Episcopal Church to launch Good News Gardens in 2020. 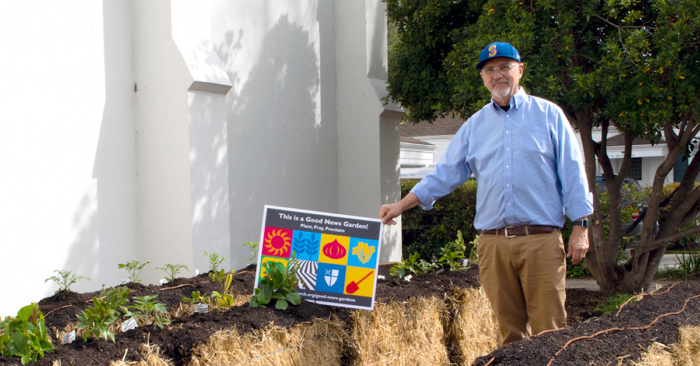 Good News Gardens consultant Brian Sellers-Petersen visits the straw bale garden at St. Mary’s, Napa, in April as part of a garden tour of the Episcopal Diocese of Northern California. The church grows tomatoes in the straw bales and then gives them away. Photo: Maria Ramirez

In April the Northern California diocese invited Brian Sellers-Petersen, a consultant to the initiative, to lead a workshop and visit some of the places that now are forming agrarian ministries.

As he travels around the country Sellers-Petersen said he is amazed by “the growth in the church when it comes to how we steward our land, and how we view ourselves as part of the community.” He added, “I think Northern California has the potential to really provide us with a lot of lessons” about agrarian ministry.

Some are small, like St. Mary’s, Napa, where without much land they have planted tomatoes in straw bales and are giving them away. Grace, Wheatland has a part-time priest who is an avid gardener, and he now is growing a variety of vegetables on the property, all donated to the local food bank.

Other efforts are larger, both in property and scale, like at St. John’s, Chico, which sits on seven acres. It partners with the Jesus Center, a local non-profit serving people experiencing homelessness, hunger and poverty, to augment the center’s food bundles with fruit from the church’s citrus orchard and with vegetables grown on-site. The church also raises flowers that the center’s clients sell through its Blooming Hope Flower Cart. 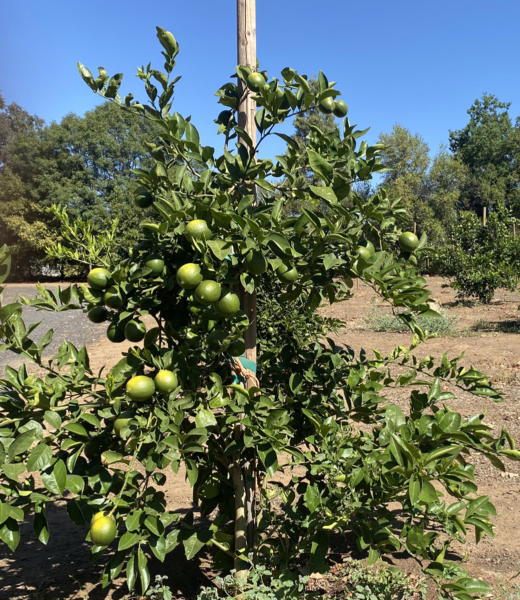 Citrus from an orchard at St. John’s, Chico, provides fruit for food bundles provided by a local nonprofit organization to people in need. Photo: Alan Rellaford

The diocese is also exploring a new way of using church land through a potential partnership that Traquair calls “Future Farmers of America and priests of The Episcopal Church.” Basically, it would look like this: a priest would work part time for a congregation and also farm the land. “There are some folks who fall into that wonderful, fruitful combination,” she said, “and I know we’re not the only diocese who’s sort of thinking about that.” While the idea is still a work in progress, Traquair said, “If we can figure out a model that works, this might be something that could work in any number of our rural towns.”

With much of the diocese’s life centered around growing seasons, she’s also contemplating an expanded Rogation Days calendar to help people mark the stages, like when rice is planted, when almond trees bloom, when grapevines need to be trimmed, when tomato plants begin to flower and fruit.

And, Traquair said, hers is not the only diocese “where there are real agrarian roots,” and

that serving others through careful tending of the land is a natural fit for Episcopalians, “because we’ve got such a wonderful emphasis on incarnational theology, that God has created the world and blessed it.

“One of our gifts is a particular appreciation and desire to find the presence of God, as we are experiencing God’s good creation.”