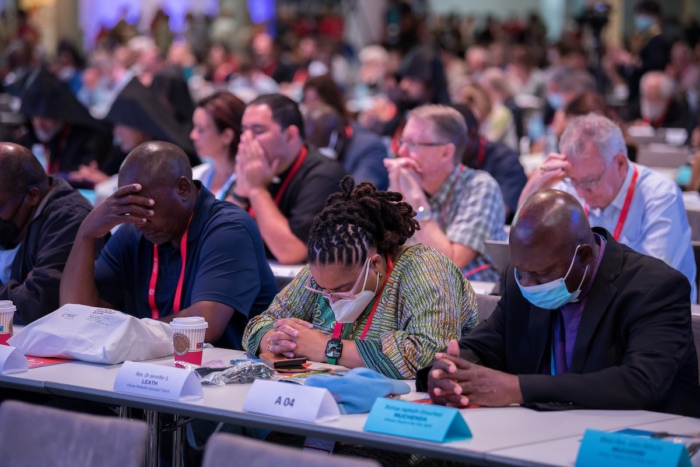 Delegates pause for a moment of prayer during the opening plenary of the 11th Assembly of the World Council of Churches in Karlsruhe, Germany on Aug. 31, 2022. Photo: Albin Hillert/WCC

[Episcopal News Service] The World Council of Churches’ 11th Assembly, described as “the most diverse Christian gathering of its size in the world,” opened Aug. 31 in Karlsruhe, Germany, with leaders expressing a desire for a new era of Christian unity to counter the proliferation of global crises in the 21st century.

Delegates from the WCC’s 352 Protestant and Orthodox member churches have traveled to Germany for the weeklong conference, including House of Deputies President Julia Ayala Harris and four other Episcopalians.

At an opening press conference, Acting General Secretary the Rev. Ioan Sauca noted that since the 2013 Assembly, the world has seen massive changes, many of them arising from political and cultural divisions. The Assembly’s theme – “Christ’s love moves the world to reconciliation and unity” – is more relevant than ever, he said.

“Karlsruhe will be a new beginning,” Sauca said. “We have to come together as Christians, more united in addressing the challenges of the world. Because Christian unity is linked to the unity of all creation.”

WCC Moderator Agnes Abuom, in her opening address, added a tone of urgency to the Assembly, telling delegates that unity is the only way to address the existential crisis of climate change.

“Listen carefully to youth among us,” Abuom said. “They are the generation that is experiencing the first catastrophes of [the] climate crisis and the last generation that can take any action to stop global warming.”

She also expressed hope that the Assembly would rise to the challenge.

“At its best,” Aboum said, “the Assembly is a spiritual celebration of the power of God’s love to renew our minds and hearts so that we may become a countercultural force driven by solidarity with the most vulnerable people and God’s creation.”

Livestreams and recordings of Assembly proceedings can be found here.