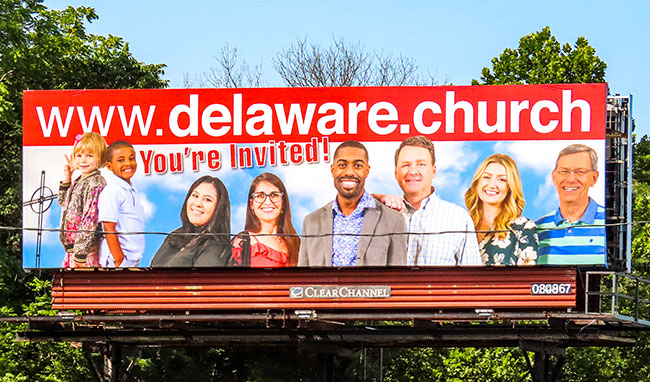 One of the diocese’s billboards in Kirkwood, Delaware. Photo: Cynde Bimbi

[Episcopal News Service] The Episcopal Church in Delaware has started an advertising campaign that aims to reach people where they are – at home, on the computer or in their car – and invite them to a local Episcopal church. Though it’s too early to tell whether it will actually bring more people through church doors, the campaign has already spurred parishes to make their own physical and digital spaces more welcoming in preparation for new visitors.

Six billboards have gone up on busy roads across the state, including Interstate 95, with the message “You’re invited!” and the URL of the redesigned diocesan website, delaware.church. The site is now oriented toward newcomers, offering them a directory of the diocese’s churches to help them find the nearest parish.

The same basic design is also featured on 25,000 mailers and hundreds of door hangers; each is localized with the name, website and service times of a nearby parish. Parishes can also use digital formats of the design on their social media accounts.

In February, when Cynde Bimbi, the diocese’s director of communications and public relations, pitched the idea to Bishop Kevin Brown, he “went all-in – and more – and took a chance on something new,” she said.

“Seeing how COVID had dampened church attendance, energy and outlook, I felt that this was the time for something new and different, if not extreme,” she told Episcopal News Service.

The timing was important, Bimbi said, because this fall will be the first time in two years that churches are welcoming people fully in-person to the start of a new program year.

“I had long been intrigued by billboard messaging and the impact [billboards] may or may not have,” she said. “I asked myself, why couldn’t we use billboards to invite people to worship at an Episcopal church near them – letting them know we are here, and this is a place for everyone?”

With billboards directing people to the revamped diocesan website and mailers and door hangers pointing them to their local church’s website, many outdated parish websites needed to be updated in order to welcome new visitors.

“While this does involve billboards, it’s primarily a digital campaign,” said Brown, who has led the diocese since 2017. “It reminds us that our websites are our new front porches.” 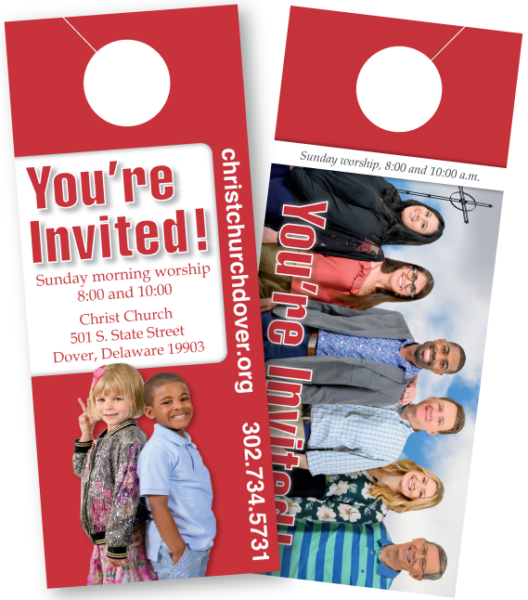 Door hangers from the diocese’s campaign.

The diocese provides the print materials to the parishes at no cost. The total cost for the diocese was just under $20,000 – about $600 per congregation, Bimbi said.

The billboards do not contain the word “Episcopal”; the mailers only use it in the name of the parish. Bimbi, who also runs her own graphic design business and designed every aspect of the campaign, said that’s intended to broaden the appeal.

“We intentionally chose not to brand, as we felt it could be limiting – the desire was for this to be an open, simple invitation,” she told ENS. “As Jesus and his followers said, ‘Come and see.’”

As part of her role in the diocesan office, Bimbi helps design websites for parishes and offers comprehensive website design guidelines. The new campaign took that effort to the next level, Bimbi said. One small church that never had a website now has one, and several parishes have fully rebuilt websites.

A group of churches on the Delaware shore – in towns frequented by summer vacationers – banded together and asked Bimbi to create a shared website. And the efforts have extended to physical improvements, too. One church has replaced a 20-year-old sign with a new one; another turned a closet at the back of the church into a media control room for livestreaming and added a video screen to the sanctuary.

The campaign took an unexpected – but perhaps fortunate – turn in early August, Bimbi said. Two of the six billboards went up 20 days earlier than expected. Bimbi didn’t know about it until she saw one while driving and “let out a bit of an exuberant scream.”

She hadn’t planned for large numbers of people to be visiting the new website yet, and needed to make some quick updates. Two days after the first two billboards went up, with no other marketing efforts yet in place, visits to the diocesan website jumped 1,820% from the prior month. As of Aug. 23 – one day after all the billboards were up and social media advertising began – 65% of viewers were new, and as estimated by analytics, the biggest age group was 25-34 years old, Bimbi said.

One of the shore churches told Bimbi anecdotally that their parish website also spiked after the billboards went up; specific analytics are pending. It’s too early to tell whether that increased web traffic will translate to in-person visits, but Bimbi and Brown are pleased with the excitement it has ignited among parishes.

“There is already success in that our parishes are pulling together and working to make their parish a more invitational and welcoming place – digitally and in-person,” Bimbi told ENS. “The energy and spirit that I have seen has been amazing and somewhat unexpected.”

“Once the campaign is over, we’ll measure to see how we did. Was it successful? Was it not?” Brown said. “This is what it means to look at things we’ve not done before and give them a shot.”