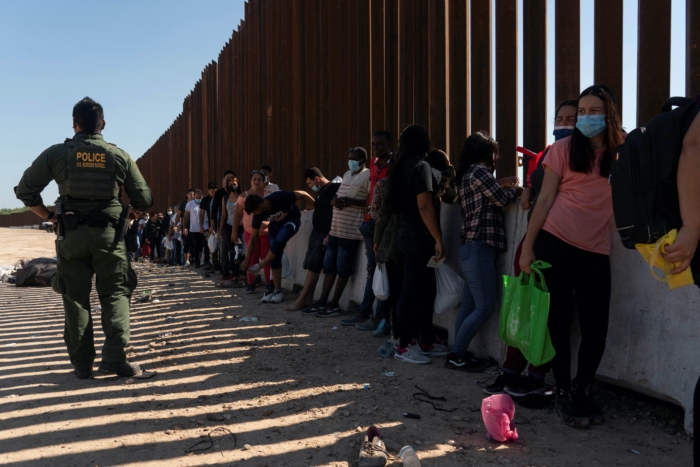 Asylum-seeking migrants, mostly from Venezuela and Cuba, wait to be transported by U.S. Customs and Border Protection agents after crossing the Rio Grande river into the U.S. from Mexico at Eagle Pass, Texas, in July 2022. Photo: Reuters

[Episcopal News Service] Episcopal Migration Ministries, or EMM, is best known as one of nine U.S. refugee resettlement agencies, facilitating The Episcopal Church’s role in assisting new arrivals to the United States as they flee war, violence and persecution in their home countries. The church has welcomed more than 100,000 refugees since 1980.

But not all migrants who seek safety in the United States arrive as refugees. Hundreds of thousands of migrants apply each year for asylum, and many find new homes in communities across the country, while their cases are being reviewed. For the past two years, EMM has expanded its outreach to those migrants through the more recent Neighbor to Neighbor program.

The program is focused on supporting asylum-seekers partly because the federal government does not offer the same financial assistance it does for refugees. “Asylum-seekers are like a forgotten population,” Allison Duvall, EMM’s senior manager for church relations and engagement, told Episcopal News Service. As a church, “we want to be providing at least equivalent amount and quality of service to asylum-seekers as refugees receive through federal funding.”

For more information about starting a Neighbor to Neighbor team, visit the EMM website or email the Rev. Chris McNabb at cmcnabb@episcopalnetworks.org.

To achieve that, Neighbor to Neighbor has sought grants and donations to back its growing network of volunteer support teams, which are organized by congregations around the United States. Neighbor to Neighbor now has 17 active teams, and they help asylum-seekers navigate a variety of challenges, such as applying for driver’s licenses, enrolling children in school, finding assistance in learning English, locating doctors and identifying where it is safest for children to play.

“We’re really the first friends to folks who are arriving in the United States,” said the Rev. Chris McNabb, who serves as Neighbor to Neighbor’s program officer for recruitment and engagement. Some of the assistance is with “things that all of us experience, whenever we arrive to a new place,” McNabb said. “Part of it is just the human connection. It’s walking with people in their basic needs.”

Episcopalians and others interested in learning about the Neighbor to Neighbor program are invited to attend a webinar at 3 p.m. Eastern Aug. 30, hosted by EMM and The Episcopal Church’s United Thank Offering, which has provided some of Neighbor to Neighbor’s financial support.

The one-hour Zoom session, “Welcoming our Neighbor with Gratitude,” will explore how UTO continues to support critical educational, advocacy and support programs at EMM and the ways individuals and congregations can become more involved in Neighbor to Neighbor.

Episcopalians also can directly support EMM’s work by visiting episcopalmigrationministries.org/give or by texting “EMM” to 41444. Donors should make a note for your donation to support Neighbor to Neighbor.

“EMM is committed to building welcoming communities, supporting the integration of newcomers, and inviting participation in the transformative ministry of community sponsorship,” Sarah Shipman, EMM’s operations director, told ENS. “There will continue to be an increasing need to find ways to support asylum-seekers coming to the U.S. This is true community work, and EMM will continue to find ways to support congregations engaged in this holy ministry.”

Neighbor to Neighbor grew out of an upstart ministry launched by the Rev. Christina Rathbone, an Episcopal priest who at the time was serving at The Cathedral Church of St. Paul, in Boston, Massachusetts. Seeing a need to help asylum-seekers navigate their new communities, she began connecting them with Episcopalians who were willing to provide an initial support system. Rathbone soon partnered with EMM to give the growing network a wider, national scope.

McNabb took over as Neighbor to Neighbor’s program director after Rathbone began serving as rector of a Western Massachusetts congregation in August 2021. Around the same time, the scope of Neighbor to Neighbor widened further to include outreach to newly arriving Afghans.

After the 20-year U.S. war in Afghanistan ended that August with the final withdrawal of American troops, about 50,000 Afghans were allowed into the U.S. under what is known as humanitarian parole. Some were able to apply for special immigrant visas, while others applied for asylum. All need to find places to live.

Many Episcopalians have reached out to EMM saying they wanted to help welcome those Afghans fleeing potential persecution under the Taliban. “I’m just amazed at the faithfulness of Episcopalians who step forward,” McNabb told ENS. “They show up every day committed to this work despite the challenges and the adversity that inevitably come from it.”

Each team must go through a discernment process and then complete training on how best to welcome their new neighbors. Most of the teams are made up of five to 10 people from one congregation sponsoring one family or individual at a time, usually for a minimum of six months. Some asylum-seekers may need support for longer periods, particularly when a language barrier slows their efforts to get settled.

Some teams are based in congregations near the U.S.-Mexico border, though others are located across the United States, wherever asylum-seekers are living as they wait for their cases to be heard. In recent years, asylum-seekers have filed about 300,000 new cases a year, with the largest number of cases involving migrants from El Salvador, Guatemala, Honduras and Mexico, according to the Department of Homeland Security. Only about 30,000 were granted asylum in 2020, including 9,000 from China and Venezuela.

No federal agency, however, identifies asylum-seekers who might need assistance, so Neighbor to Neighbor gets its referrals from Episcopal border ministries, ministry partners and various other support networks for asylum-seekers, McNabb said.

The volunteer Neighbor to Neighbor teams need not have any expertise in social services or immigration law to participate – only a commitment to walk alongside their new neighbors and make them feel welcome. The teams have helped 47 new neighbors so far. Some of their experiences have yielded heart-warming stories.

One family of Afghans, for example, was settling into a suburban apartment building, McNabb said. They were concerned about their unfamiliar surroundings and the language barrier, but as they were exiting their apartment one day, they were greeted by a man who lived across the hall. He asked if they were from Afghanistan.

The man said he, too, had moved there from Afghanistan 27 years ago and now worked as a taxi driver, according to McNabb. The man had long prayed for the opportunity to show hospitality to another family in the same way that he had felt welcomed by his new neighbors when he first moved to the community.