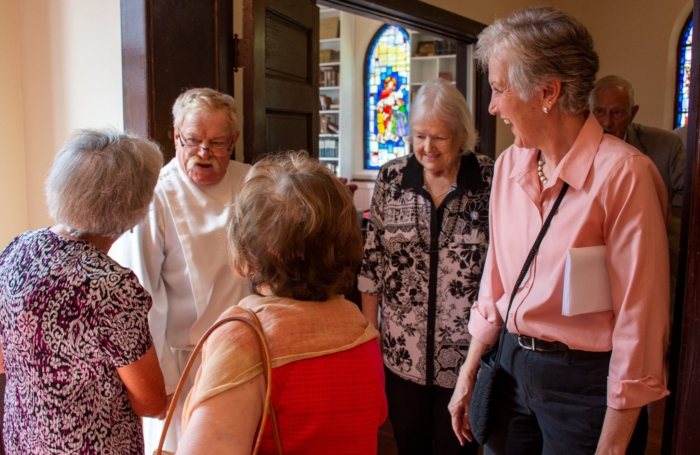 [Episcopal News Service] In the past month, Episcopal clergy in the Diocese of South Carolina have begun leading worship services again in some of the 14 churches that a court ordered to be returned to the Episcopal diocese. Several property transfers are complete or progressing as the Episcopal diocese winds down its decade-long legal battle with a breakaway group now affiliated with the Anglican Church in North America, or ACNA.

More than 200 people attended two worship services led by the Rev. Callie Walpole on July 17 at St. John’s Episcopal Church west of Charleston on Johns Island. They were the first Episcopal services at St. John’s in nearly 10 years, after a 2012 diocesan schism. Also on that day, the Rev. Rob Dewey and a few dozen worshipers marked the resumption of Episcopal services at nearby Grace Chapel, a chapel affiliated with St. John’s, in Rockville on Wadmalaw Island.

On Aug. 1, an ACNA congregation vacated St. David’s Episcopal Church in Cheraw, transferring the property near the North Carolina state line to the Episcopal diocese.  The Rev. Michael Bye, who had been serving the Episcopal Worship Group of Cheraw, was named by South Carolina Bishop Ruth Woodliff-Stanley to serve as interim priest-in-charge at St. David’s, and Bye led his first worship service there on Aug. 7.

“The strong and loving Episcopal community of Cheraw has faithfully shared the good news of Jesus for generations in an area rich with the history of our diocese and state,” Woodliff-Stanley said in an online announcement. “Now, guided by their wise leadership in Cheraw, we look forward to welcoming new friends and old to worship with us at St. David’s.”

And the diocese has announced that the Rev. Furman L. Buchanan will serve as priest-in-charge of Christ Episcopal Church in Mt. Pleasant when that property is transferred to the Episcopal diocese in September.

The Diocese of South Carolina, one of the state’s two Episcopal dioceses, is based in Charleston and counts about 7,500 members in 31 congregations across the southeast half of the state, including the Atlantic coastline. It was one of the original nine dioceses when The Episcopal Church was founded in 1785, and some of South Carolina’s congregations today date to even earlier in the 1700s. Christ Church in Mt. Pleasant was one of the diocese’s first churches, built in 1708, and St. David’s in Cheraw was founded in 1768.

The April 2022 state Supreme Court ruling has offered a degree of finality to the Episcopal diocese’s long-running property dispute with the ACNA diocese, which was founded by former Episcopal leaders who left the church in 2012 over theological and doctrinal differences, particularly related to the ordination of gay and lesbian clergy and blessing and marriage rites for same-sex couples.

The court concluded that ACNA must return 14 church properties to the Episcopal diocese but can keep possession of 15 other church properties now occupied by ACNA congregations. The court based its decision on a variety of factors, including whether the 29 ACNA parishes in question had created an “irrevocable trust in favor of the National Church and its diocese.” It concluded that 14 had done so and 15 hadn’t. 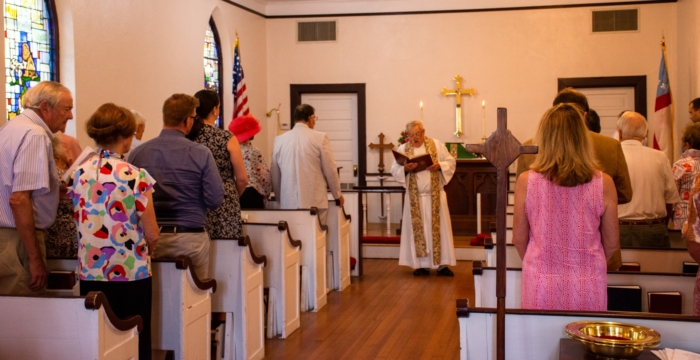 Worshipers gather Aug. 7 at St. David’s Episcopal Church in Cheraw, South Carolina, for the first service after the transfer of the property to the Episcopal diocese from a congregation affiliated with the Anglican Church in North America. Photo: Diocese of South Carolina

The status of other seven church properties is pending while the ACNA congregations occupying those churches ask the state Supreme Court to review its ruling.

The ACNA diocese declined to file its own request for the court to review the ruling, and tensions between the two dioceses appear to be easing. Woodliff-Stanley has met with her ACNA counterpart, Bishop Chip Edgar, and with the court case mostly resolved, “we’re eager to redirect resources toward the more central aims of the Gospel and away from conflict,” Woodliff-Stanley told ENS in a May interview.