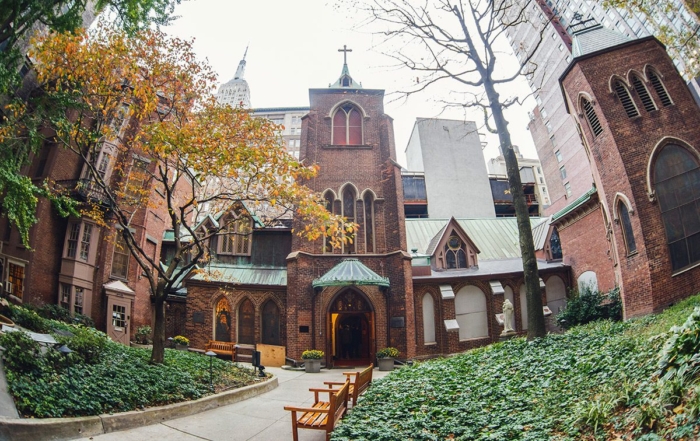 [Religion News Service] Blocks away from the Empire State Building, a stunning, mid-19th-century Gothic-style brick church is nestled between steel skyscrapers in New York City’s NoMad neighborhood. The Church of the Transfiguration — affectionately known as “The Little Church” by its congregants — is home to an active Episcopal community and is a national landmark. The basement of the rectory was a stop on the Underground Railroad, and the church gave sanctuary to several dozen Black folks under attack during the Civil War draft riots.

But like many century-old churches, Church of the Transfiguration is struggling due to the cost of upkeep — plus the trials of COVID-19.

“The problem is that, particularly in New York, congregations are housed in large, historic properties, with large amounts of deferred maintenance,” nonprofit leader Kate Toth told Religion News Service. “At the same time, membership in most religious communities is declining. Those are two difficult trends to square.”

But Toth has a solution to offer. Enter Venuely, a space sharing website launched this month. The interfaith platform borrows from other space sharing models like Airbnb to match houses of faith in New York City that have surplus space to short-term renters in search of a deal. It’s also founded by two nonprofit organizations (Bricks and Mortals and Partners for Sacred Places) that aim to develop capacity for faith communities, not line their pockets.

“There is a huge dearth of affordable, below-market rental spaces,” noted Venuely owner Toth, who is also executive director of Bricks and Mortals. “This really opens up an entire new market of space that’s available, probably thousands of hours of rental spaces that would not otherwise be available. And all these congregations are really interested in providing space specifically to mission focused organizations.”

Katherine Hutt, a parishioner and vestry clerk at Church of the Transfiguration, told RNS she’s eager to use Venuely to offer affordable rehearsal space. In addition to its historic ties to anti-slavery, the church has a longtime relationship with the local theater community; in the 1860s, it became one of the first churches in Manhattan to conduct funerals for actors. Inspired by its connection to the arts, Hutt has become a co-founder of Houghton Hall Arts Community, a new rehearsal space in a modern building attached to Church of the Transfiguration that will begin renting to arts groups in the coming months.

“We’re turning (the space) into an outreach mission for theater community, and because we’re nonprofit we can offer the space at a very good price,” said Hutt. “Churches have a lot of unused capacity. It makes a lot of sense for that space to be available for other organizations, especially when you have a mission match like we do with the theater community.”

When it opens its doors, Houghton Hall plans to fill out a profile on the Venuely website that allows potential renters to view available spaces, prices and any rules for the space, including whether guests can consume alcohol. Houses of worship can sign up on Venuely for free.

Toth told RNS she expects at least 50 host sites to join Venuely initially, with the hope of many more — including in other locations — eventually. Venuely asks a 5% processing fee that goes toward running the site, but the organization is largely funded by a grant from the New York Community Trust. Venuely is currently only open to host sites and will begin welcoming renters in September.

Christ Church Cobble Hill in Brooklyn also enjoys sharing space with artists and other faith groups, including a local Buddhist community, but won’t be able to rent out the church’s historic nave, at least for the time being. Built in the early 1840s, the nave was forced to close in 2012 when lightning struck the church’s tower, causing it to collapse and tragically kill a passerby. Once the tower and roof repair is completed, the Rev. Mark Genszler told RNS, the church would be open to using Venuely.

“I could see Christ Church and other Episcopal churches using something like Venuely for the interstitial moments, both to be involved in neighborhood services and to become known as a congenial space to do short term work, and as a way of introducing yourself to a whole community of people,” Genszler said.

The roadblock keeping many houses of worship from gaining supplemental income via space sharing is the perceived risk to their tax-exempt status, according to Toth. But Samuel Brunson, an associate dean at Loyola University in Chicago who researches religion and the tax system, said there is almost no circumstance where renting will put a house of worship’s tax-exempt status at risk.

“If a church is renting out its property to other people, as a general rule, that’s not going to affect its federal tax exemption,” Brunson explained in a recent phone call with RNS. “The caveat is, if it suddenly stops holding worship services and a significant portion of what it does becomes renting real estate, then it might lose this exemption because it’s no longer pursuing its exempt purpose.”

Moreover, because the IRS doesn’t normally count tax-exempt organizations’ rental income as unrelated business income, houses of worship generally won’t need to pay federal taxes on rental income. However, Brunson added, if faith communities begin providing paid services such as meals or cleaning, they may need to pay taxes on the income earned from those services, but it won’t compromise their tax exempt status overall.

That’s an important distinction for faith communities in New York City. The Rev. Arden Strasser, pastor of St. Luke’s Lutheran Church in Hell’s Kitchen, is careful to only rent to other nonprofit, tax-exempt organizations to avoid paying taxes on the income from renting out parts of the 99-year-old building for recitals, rehearsals, lectures and concerts.

Looking ahead, St. Luke’s plans to use Venuely to rent its stained-glass adorned sanctuary as well as a multipurpose room to members of the arts community. For Strasser, opening the space up for nonprofit arts groups is an extension of what the church does on Sundays.

“On Sundays, I preach Christ very clearly. But the rest of the week, we preach suffering love by the activities we support,” Strasser told RNS. “Artists, I think, have deep love for the world, and they want to give something to it and be received. If churches could help artists share from their heart with others, it would be a blessing to the city.”