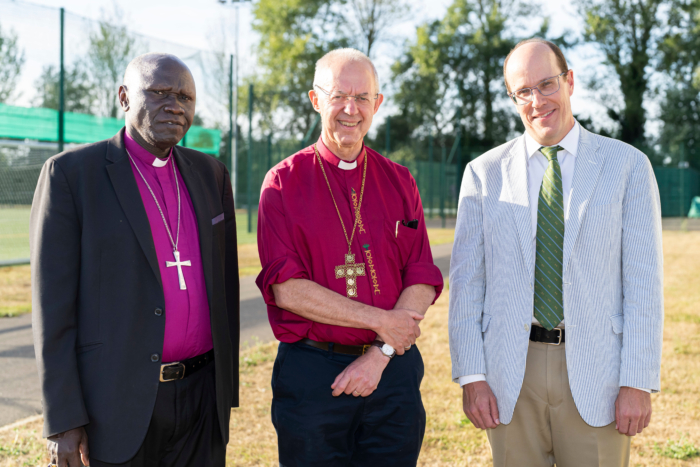 [Anglican Communion Office] The Executive Director of the Living Church Foundation, Dr Christopher Wells, has been named as the next Director of Unity, Faith and Order for the Anglican Communion. Dr Wells will succeed the Venerable Dr William Adam, who was installed as Archdeacon of Canterbury last month.

As Director of Unity Faith and Order, Christopher Wells will lead and support the work of the Inter-Anglican Standing Commission on Unity, Faith and Order (IASCUFO) – the international body that advises provinces, the Secretary General and the Instruments of Communion on ecumenical relations and doctrine. He will also serve as the lead staff member for Anglican Communion delegations to official international ecumenical dialogues.

Dr Wells has served as Executive Director of the Living Church Foundation since 2009. The foundation is an American-based non-profit charitable organisation governed by members of the US-based Episcopal Church and the wider Anglican Communion. It champions “the catholic and evangelical faith of the one Church and to hasten the visible unity of all Christians.” It publishes The Living Church magazine, which has been in continuous publication since 1878 and various other print and online resources.

In addition to his work with the Living Church Foundation, Dr Wells has served on the Communion across Difference Task Force for The Episcopal Church, is Theological Consultant to the Anglican-Roman Catholic Consultation in the US, and has been a member of the steering team of the Communion Partners since 2017. He is Affiliate Professor of Historical Theology at Nashotah House Theological Seminary, and regularly teaches on Thomas Aquinas and ecclesiology, including a course at the Anglican Centre in Rome, entitled “Christian Unity in Rome: Anglican Ecclesiology and Ecumenism.”

Commenting on his appointment, Dr Wells said: “It is an honour to be called to this important work, which will of course be undertaken as a team, and I very much look forward to working with and supporting Bishop Anthony, IASCUFO, the ACC, and colleagues at Lambeth Palace, as well our ecumenical partners and friends.

“The call to truth and unity in God’s Church, as Archbishop Justin has emphasised, is holy work, since it follows from God’s own gift and also leaves more for us to do.

Anglicans have long said that we are called to full visible unity, both with one another and all Christians and churches. We are not entirely of one mind as Anglicans, and we need to work to deepen our communion, while duly marking places of disagreement and impairment. I pray that God will give us all patience and generosity, and love, as an Anglican family, to recommit to walking together to the highest degree and greatest extent that we can.”

Welcoming his appointment, the Secretary General of the Anglican Communion, the Most Revd Dr Josiah Idowu-Fearon, said: “Christopher Wells is a person with significant theological knowledge and extensive connections throughout the Anglican Communion. He will bring great gifts to this important role as director of Unity, Faith and Order.”

Dr Idowu-Fearon steps down at the end of this month and will be succeeded as Secretary General by Bishop Anthony Poggo. “Dr Christopher Wells has substantial experience within and throughout the Communion and significant knowledge of Anglicanism and in working to bring people together despite theological differences,” Bishop Poggo said. “He brings wide experience having served as theological consultant to the Anglican-Roman Catholic Consultation in the US (ARC-USA), as a member of the Communion Partners Steering Team and as a board member of the American Friends of the Anglican Centre in Rome.

“Christopher has built relationships across the Communion through his role as Executive Director of Living Church Foundation. This will all be useful in his new role.

“I look forward to working with him as we both embark together on the next chapters of our ministry in the Anglican Communion.”

The Chair of IASCUFO, the Right Revd Graham Tomlin, Bishop of Kensington, said: “I am delighted at the appointment of Christopher Wells as the new Director of Unity, Faith and Order. He brings deep theological wisdom, as well as a wealth of experience both within the Anglican Communion and in ecumenical discussions and an ability to work with a wide range of people across the Anglican Communion.”

Dr Christopher Wells will take up his new role in the coming months.