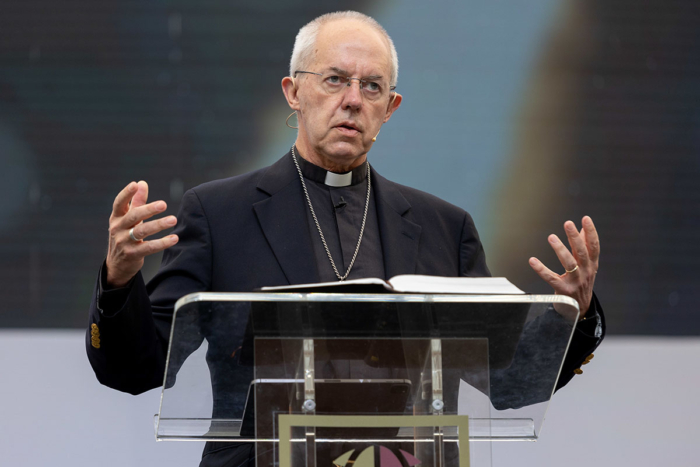 [Episcopal News Service – Canterbury, England] In his third and final keynote address of the 15th Lambeth Conference, Archbishop of Canterbury Justin Welby called the church back to the Five Marks of Mission – Tell, Teach, Tend, Transform and Treasure – tying them to the theme, “God’s Church for God’s World.”

“In each generation, the principles remain but the way we take actions changes,” he said, noting the actions “to which we are called” are present in the Lambeth Calls.

“The church united is not merely a help to the world; it is the sign of salvation to the transformation of the world. The church humbled and hospitable, generous and full of love, is not just a nice thing to have in society; it points to the kingdom of heaven,” said Welby on Aug. 7 at the University of Kent, the site of the conference.

The church is not just another nongovernmental organization but “God’s chosen means of shining light in the darkness,” he said. Welby also emphasized evangelism, formation and discipleship, focusing on bishops’ vocation in leading God’s church, which exists for the sake of the salvation of God’s world, throughout his final address.

It’s in periods of darkness that churches confront the world’s challenges and grow, and their members must be educated in Scripture and extrapolate it into the world.

“The strength of many churches that grow – grow deeper and grow in numbers – is that everyone knows the Gospel and can say something about their own testimony of their love and meeting with Jesus Christ,” Welby said. “They may not be eloquent, their theology may be slightly crude, but when they speak from the heart, others listen and their transformed lives illustrate their words.

“It is essential throughout the churches of the communion that everyone understands themselves to be witnesses because they are baptized and filled with the Holy Spirit.”

Over 650 bishops from across the Anglican Communion gathered July 26 at the University of Kent, just outside the city center, for the 12-day conference. Welby addressed the conference one last time when he preached at the closing Eucharist.

The office of the archbishop of Canterbury is one of the four Instruments of Communion, as is the Lambeth Conference, which is typically held every 10 years. Installed in March 2013, Welby is the 105th man appointed to the office.

At this Lambeth Conference, discussion centered on “Lambeth Calls,” draft papers on 10 subject areas that were intended to initiate discussion among the bishops and to offer action items for when they return to their provinces and dioceses after the conference. Calls focused on mission and evangelism, discipleship, environment and sustainable development, reconciliation and human dignity.

Despite Welby’s and organizers’ intentions to keep the discussions focused on the conference’s theme, long-standing disputes over human sexuality began simmering even before the conference began as conservatives sought to affirm a resolution adopted by bishops attending the 1998 Lambeth Conference that condemns same-sex marriage and all sex outside of marriage between a man and a woman. But by the conference’s seventh day, Welby had managed to tamp down some of the tension by lifting up both traditional and progressive marriage beliefs.

Though stark divisions remain over issues of human sexuality across the communion, which covers 165 countries, many Anglican and Episcopal bishops concluded their time in Canterbury on a more hopeful note, looking toward unity despite lingering differences.

Christians, he said, are called to reconciliation and to be reconcilers, though at times the church “coughs and staggers” along in the darkness of the world “in fear of the future.” How, he asked, should the church act in relationship?

“That is the first and greatest call, the one we haven’t listed, but it is the greatest call because it is the Scriptural call. And through these weeks of calls and conversations, this week has not planned to be, but has become, a time of intense ecclesiological development and thinking and reflection for the Anglican Communion.

“We are a communion of churches catholic and reformed, autonomous and interdependent, and we must keep to the principles of both.”

The Scriptures, he said, form the “heart” of the reformed tradition, and the catholic tradition is not only staying true to the historical episcopacy but recognizing membership in a global church and upholding the principles of social organizing and education.

“Autonomy is an expression of subsidiarity, the principle in Catholic social teaching that we should always work at the most local level possible.”

Throughout the conference, and particularly when organizers decided to eliminate voting on the calls, delegates were reminded that the Lambeth Conference is not a legislative body, nor does it have binding authority.

In addition to the 10 Lambeth Calls, on Aug. 6, the conference’s final business day, primates continued a tradition of issuing “statements of support” for areas of the Anglican Communion that are facing particular turmoil. Distinct from the Lambeth Calls, which recommend action, the statements bear witness to crises around the world – especially those that affect Anglican provinces – and send prayers for peace and resolution.

The statements range from the need to address gun violence in the United States to the climate crisis to peace in Israel and Palestine to the world’s refugee crisis. In his final address, Welby made it clear that church leaders need to be courageous and use their voices to stand up to governments.

“All too often, all churches, not only Anglicans, have got sucked into supporting governments colluding with injustice and upholding oppression at any and every level. To stand up against oppression is frightening because it is costly and so many of you know that so well,” Welby said.

“We don’t like it when governments speak forcefully against us or do worse than that … yet we must speak. To be silent on the climate emergency … on the unethical treatment of migrants or on war and oppression, on the abuse of human rights, on persecution, is to be one of the oppressors.”

As a result of the pandemic, the 15th Lambeth Conference took place in phases: Phase 1, or the listening phase, happened in the year leading up to the conference. Phase 2 was the conference itself. And Phase 3, which will be led by South Sudanese Bishop Anthony Poggo, the incoming secretary-general of the Anglican Communion, will take place over the next two years, aimed at further deepening understanding, building relationships and learning from one another.

“It’s not an action list; it’s a relationship approach. But we will have the aim of seeing how we can put into practice, contextually, in our local area, in the right way, those things on which we have agreed …,” Welby said. “[It] will enable us to pray for one another, but most of all, it will take us facing outwards, going outwards; it will enable our relationships to draw us towards greater holiness and unity.”