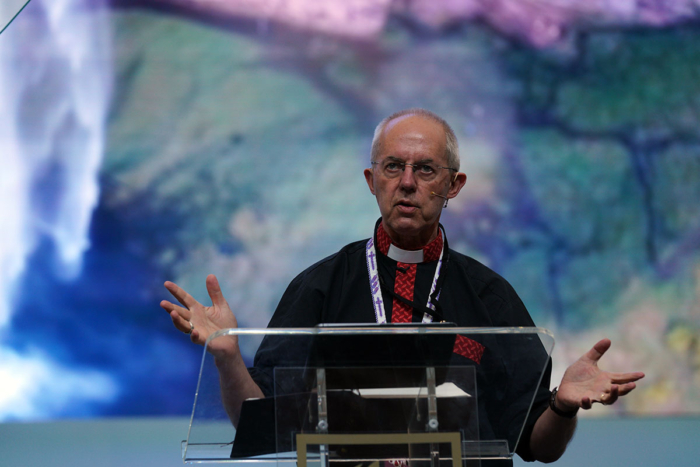 [Episcopal News Service – Canterbury, England] In his second keynote address to the bishops of the Anglican Communion on Aug. 5, Archbishop of Canterbury Justin Welby said the church should be “a place of revolution without violence,” taking bold action against the social injustices that afflict the poor and powerless.

Some 650 bishops representing 165 countries are attending the 15th Lambeth Conference, the first in 14 years, after past conferences typically were held once a decade.

In his later afternoon address, Welby expounded on some of the defining topics of the conference, which will end on Aug. 7 with a closing service at Canterbury Cathedral. Churches, he said, are called to disrupt oppressive and exploitative systems, such as extreme economic disparities, resource hoarding and environmental destruction.

“How can science serve the Kingdom unless we have those who can argue the claims of God based on the gifts God has given us in science and technology?” Welby asked. “How can we challenge the selfishness of the rich if we are unable to argue with economics in the power of the Spirit?”

In advance of the 2022 Lambeth Conference, Welby had said he hoped to unite the 85-million-member communion under common expressions of faith and social engagement, rather than focusing on debates over human sexuality that have divided bishops at past conferences. Instead, bishops were to come together around the theme “God’s Church for God’s World.” Aspects of that theme were have been presented in a series of 10 “Lambeth Calls,” including science and faith, mission and evangelism, interfaith relations, climate change and human dignity.

On Aug. 2, in a closed session on the Lambeth Call on Human Dignity, Welby sought to bring the bishops closer together by affirming the sincerity and theological rigor of Anglicans on both sides of the divide over the extent of LGBTQ+ inclusion in the church.

In his Aug. 5 address, the second of three, he indirectly referenced the Anglican Communion’s internal disputes over sexuality, saying Anglicans must be “united” but not necessarily “unanimous.”

“The miracle that God has brought about in the church is not that like-minded people like each other, but that the most unlike people, love each other,” he said.