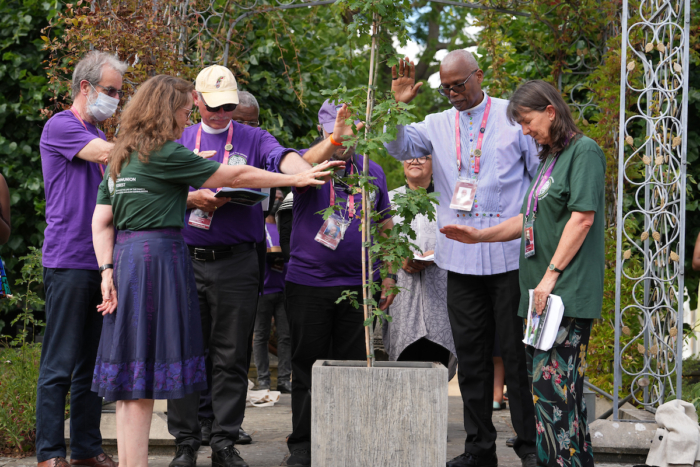 Bishops attending the Lambeth Conference bless a tree in the newly launched Communion Forest initiative, part of the bishops’ focus on the environment and climate change during a trip Aug. 3 to London and Lambeth Palace. Among the bishops shown are California Bishop Marc Andrus, in hat, and Central America Archbishop Julio Murray, to the right of the tree. Photo: Lambeth Conference.

[Episcopal News Service – London, England] With the launch of the Anglican Communion Forest, Anglican and Episcopal bishops from across the world are seeking to make tangible their shared commitment of the Fifth Mark of Mission, to strive to safeguard the integrity of creation and sustain and renew the life of the Earth.

Climate change “is an absolutely enormous emergency for literally billions of the world’s population,” Archbishop of Canterbury Justin Welby said during an Aug. 3 press conference held in the Lambeth Palace Library. 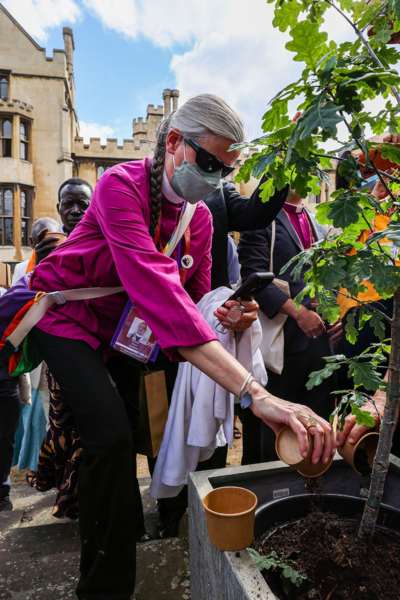 During the gathering on environment and sustainable development held Aug. 3 at Lambeth Palace, bishops participated in a symbolic tree planting ceremony. Photo: Neil Turner/ For the Lambeth Conference.

“If we stand united, we can, as the global Anglican Communion, make a transformative difference around the world,” he said. “There is a real sense of unity on this, and today is a sign of great hope for the poorest who represent the vast majority of Anglicans in the world.”

It was the eighth day of the Lambeth Conference, and bishops and their spouses traveled by bus to spend the day in Lambeth Palace’s garden, where the discussion focused on environment and sustainable development. While there, the forest’s first tree was planted in the garden marking the launch of the global forest initiative focused on provinces’, dioceses’ and individual churches’ efforts toward forest protection, tree growing and eco-system restoration.

“I believe that to plant a tree is a symbol of hope, to protect an ecosystem is a symbol of love, and to restore a habitat is to bring healing to our planet,” said Diocese of Norwich Bishop Graham Usher, the Church of England’s lead bishop for the environment, during the press conference.

Although there is no existing funding mechanism for the initiative, it is the organizers’ hope that it will become the legacy of the 15th Lambeth Conference and that the launch is designed to encourage people to join the effort.

“Instead of putting carbon dioxide into the atmosphere, the greenhouse gases that we know are heating the planet up and causing not just heating but climate ‘weirding,’ all the erratic and increasingly violent storms and other kinds of events – instead of that effect, we’re pulling greenhouse gases out of the atmosphere,” Andrus told Episcopal News Service in a video interview in the palace’s garden.

The Lambeth Conference is a typically once-a-decade gathering of Anglican bishops from around the world; it has been underway since July 26 to the southeast of London in Canterbury. Over 650 bishops from 165-plus countries are gathered at Welby’s invitation, engaging in Bible study, plenary and closed sessions to discuss world issues, including mission, evangelism, “safe church” policies, reconciliation, human dignity and sexuality. The conversations are meant to guide the communion in the coming decade.

(Full ENS coverage of the Lambeth Conference is here.) 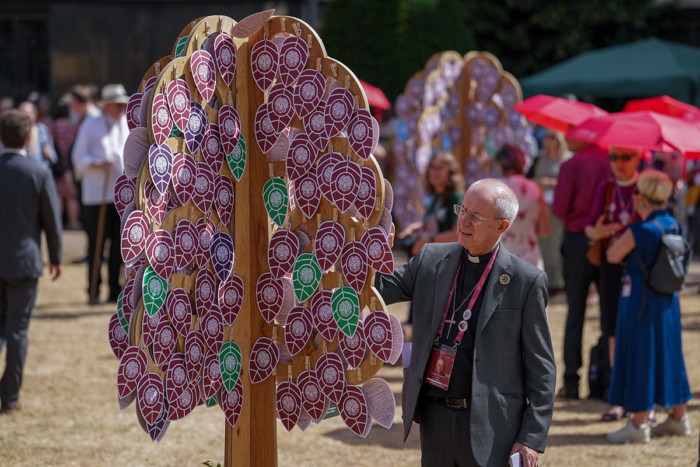 Archbishop of Canterbury Justin Welby reads the messages written by bishops and spouses and fixed to symbolic trees during the environmental and sustainable development day Aug. 3 at Lambeth Palace Photo: Andrew Baker/For the Lambeth Conference

While gathered at Lambeth Palace, bishops discussed the Lambeth Call on Environment and Sustainable Development. 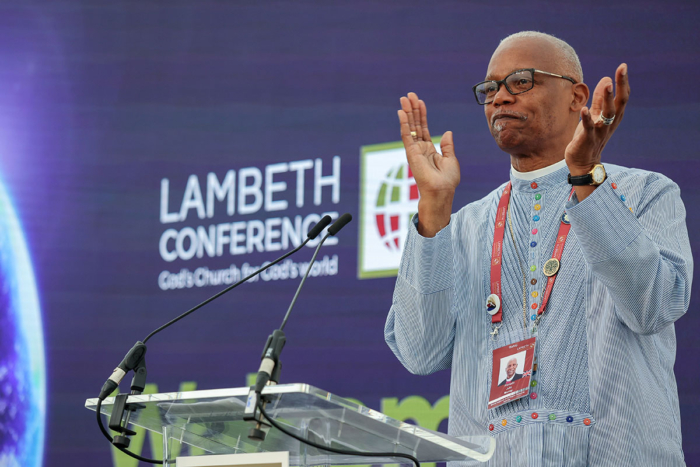 Archbishop Julio Murray of the Anglican Church in Central America and bishop of the Diocese of Panama spoke during the Aug. 3 day on the environment and sustainable development at Lambeth Palace. Photo: Photo: Neil Turner/For the Lambeth Conference

During the press conference, Archbishop Julio Murray, primate of the Anglican Church of Central America and bishop of the Diocese of Panama, stressed the importance of holding global leaders to their commitments to fund climate adaptation and mitigation programs in less-developed countries, what is commonly referred to as “loss and damages,” spelled out in the 2015 Paris Climate Agreement.

“The most wealthy countries have signed on, but when we were at COP 26, we found out that what they had signed onto they weren’t complying with,” said Murray, who led the Anglican delegation to the 2021 United Nation’s climate conference in Glasgow, Scotland. And, he said, even when the funds were available, countries encounter real bureaucratic hurdles in accessing them. Advocating for easier, better access at the level of national government, he suggested, is one way religious leaders can have a positive impact.

“I would add that people listen to their faith leaders,” she said during the press conference. “From the part of the world where I’m coming, faith leaders share and have a seat at the table with the people that make the decisions across different sectors in the countries. Being able to understand the big role that leaders can play in helping us actually act is really important.”

It’s those same leaders, she said, who get ordinary citizens to understand what’s at stake, the lives of people and their livelihoods. “To also understand that the climate issues are so much interrelated with other issues with the food we eat, the air that we breathe, the health and everything that surrounds us … If we do not really take action on climate right now, it’s going to mean that the world is going to be uninhabitable,” Wathuti said.

Following the press conference, in a conversation with ENS, Murray stressed that churches, especially those on the front lines, often find themselves providing relief.

“The church calls upon the membership to help us respond to the relief that is so needed around the world,” Murray said, adding also that “the church is also saying to the government, listen, we are doing it out of relief, because we know the impact that it causes on the life of the people, but you need to do it because you sign on to a protocol, you need to be committed and you need to respond.” 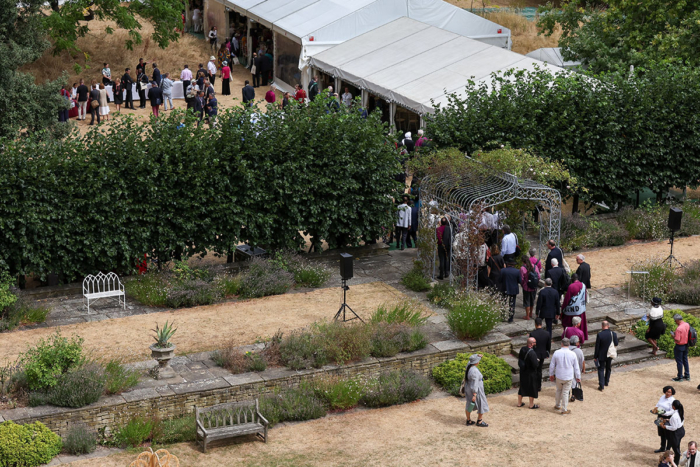 In her message to the Lambeth Conference, Queen Elizabeth II acknowledged “the effects of climate change are threatening the lives and livelihoods of many people and communities, not least the poorest and those less able to adapt and adjust.” The conference, she said, is happening “at a time of great need for the love of God.”

Bishop Marinez Bassotto leads the Episcopal-Anglican Church of Brazil’s Diocese of the Amazon, which covers five of Brazil’s northern, remote states where heat, deforestation, mudslides, fires and other climate-related disasters are forcing people to flee the region and look for work in cities, which in turn causes poverty rates to increase there, she told ENS.

The immediate impacts of climate change are being felt worldwide, and Episcopal churches in the United States and Europe, where the church is present in seven countries, are making efforts to minimize their carbon footprints and educate people about creation care, clean energy and climate impact mitigation strategies.

The Convocation of Episcopal Churches in Europe, for instance, has a ministry initiative on climate and creation care, which stresses environmental stewardship as a Christian value, Bishop Mark Edington, who leads the convocation, told ENS in the palace’s garden.

In the Charleston-based Episcopal Diocese of South Carolina, where sea level rise is an immediate threat, the diocese is just beginning a creation care initiative to include education around “habits and practices that we have that, simply, both individually and collectively, need to change around our use of fossil fuels and around our use of plastics,” Bishop Ruth Woodliff-Stanley, told ENS.

In Colorado, where an outdoor lifestyle is part of the culture, and where water shortages and wildfires are becoming increasingly frequent, environmental stewardship is a priority.

“All of our churches, each in their own way, are working on how they care for creation and how they can help lessen their carbon footprint,” Bishop Kym Lucas, who leads the Episcopal Church in Colorado, told ENS. “And it’s really important for us to talk about these in terms of our stewardship and not in terms of politics or policies, but our obligation as baptized Christians to take care of this gift that we’ve been given.”

A sensitive “dichotomy” also exists to the north in Wyoming, where Bishop Paul-Gordon Chandler leads the Episcopal Church in Wyoming.

“We’ve got this beautiful, gorgeous terrain and wildlife that we’re known for, but we also are one of the energy states, coal especially,” he told ENS in the palace’s garden. And, so, what we’re doing is seeking to find a moderating voice, and let the church be right in the center of it all.”

One way Episcopalians in Wyoming approach that is what Chandler calls “a sacred harmony, of being at one with the Earth and all that was created and lives on the Earth.”

And, he said, they are increasingly looking to their “Native American sisters and brothers, where this is inherently part of their spirituality, and giving them a voice, not just in our local context but sharing that voice nationally.”