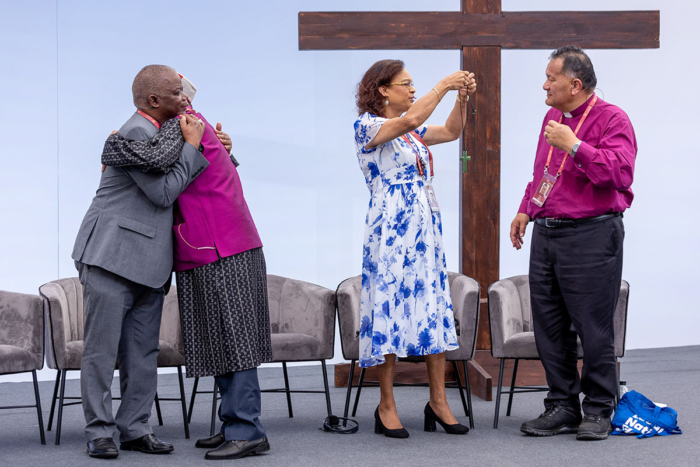 (Left to right) Archbishop Carlos Matsinhe of the Anglican Church of Mozambique and Angola; Bishop Pradeep Samantaroy of the Diocese of Amritsar in the Church of North India; Sheran Harper, worldwide president of the Mothers’ Union; and Bishop Te Kitohi Wiremu Pikaahu of the Anglican Church in Aotearoa, New Zealand and Polynesia share embraces at the end of the plenary session on reconciliation at the Lambeth Conference on Aug. 2, 2022. Photo: Neil Turner/The Lambeth Conference

[Episcopal News Service – Canterbury, England] Anglican bishops took up the Lambeth Call on Reconciliation on Aug. 2, uniting in a message of justice and healing for those who have been oppressed. Coming just before their session on the more controversial Call on Human Dignity, the Call on Reconciliation focused on the church’s broader work on rectifying unjust social systems and less on addressing the factions within the Anglican Communion.

The call encourages provinces to address, in their own ways, the wounds caused by racism, sexism and other abuses of power. It specifically cites The Episcopal Church’s antiracism work as an example for other provinces to follow.

The bishops did not vote during the session, but there was a general sense of agreement on the message of the call, said Connecticut Bishop Ian Douglas, who was on the drafting group for the call. Instead, they shared stories of what reconciliation has looked like in their dioceses and countries.

“We’re actually sharing our lives in a meaningful way, as bishops, one with another, rather than some kind of exercise in political platitudes or disembodied votes,” Douglas told Episcopal News Service. “What we were trying to do was actually model in our process what we were talking about in our content. Because if we’re talking about reconciliation, the last thing we want to do is construct winners and losers.”

Much of the day’s discussion centered on the theological basis of reconciliation. True reconciliation, Anglican leaders said, can take myriad forms, but it must incorporate the same fundamental concepts.

The call’s declaration that “in order for God’s reconciliation to be fully realized there needs to be both justice and accountability” was underscored by Archbishop of Canterbury Justin Welby – who literally wrote the book on reconciliation – in the morning’s Biblical exposition session. Expounding on “challenging” language in 1 Peter that seems to approve slavery and the subjugation of women, Welby said the church must expose and dismantle unjust systems of power like colonialism, racism and sexism – power structures that churches have been intertwined with for centuries.

Welby and others cited sexism in particular – and the disenfranchisement and violence that it often spawns – as an oppressive power structure that the church has not paid enough attention to.

“We’re good at condemning some of these things but we don’t do so uniformly. Wives and slaves are explicitly compared in 1 Peter. And yet we’re very confident in condemning slavery, but less confident in condemning systems that keep women, girls, wives in situations of domestic violence, abuse and exploitation,” Welby said. “We do say that slavery is something that must be rejected in contemporary contexts by Christians, but the system of patriarchy has not yet been discarded and left behind in the same way.”

“Women and families are often powerful forces for reconciliation right across the world,” Harper said. “And may I say in the same breath that women and families suffer most in times of division and conflict, and also the long journey of reconciliation. Women and girls always seem to be on the front line of the harshest and most violent of circumstances.”

Archbishop Carlos Matsinhe – primate of the Anglican Communion’s newest diocese, the Anglican Church of Mozambique and Angola – testified to the impact of those violent circumstances in Africa, and the need to address the power imbalances that have contributed to them. Angola and Mozambique are both particularly affected by colonialism; both were Portuguese colonies for centuries until 1975.

Bishop Te Kitohi Wiremu Pikaahu of the Anglican Church in Aotearoa, New Zealand and Polynesia proposed an exercise to illustrate the importance of trust in the process of reconciliation. He invited the bishops to exchange their pectoral crosses – or some other valuable item – with the person next to them, to be returned at the end of the plenary.

Reconciliation, he said, “requires trust. It requires us to be optimistic in our intent. … I want to highlight the giving away of something of value, knowing that it will return to you.”

As with other calls, the reconciliation call encourages provinces and dioceses to take certain steps, using methods relevant to their unique contexts. The call specifically commends The Episcopal Church’s antiracism work, citing it as a model that other provinces may follow.

“Inspired by many Anglican churches’ work in truth telling, reckoning and racial healing,” the most recent draft of the call reads, “we invite each province to an exercise of self-examination and reflection, listening respectfully to the experiences of those who have historically been, and continue to be, marginalized in their contexts and in their church.”

The call asks that each province “engages with a reconciliation resource of their choice by the 2025 Primates Meeting, in order to share stories from that experience and from listening to groups who have historically been marginalized.” Each of the Anglican Instruments of Communion is also requested to undertake a “similar self-examining, listening exercise.”

The call also asks Welby “to renew and refresh the conversation with the Churches of Nigeria, Rwanda and Uganda, seeking a full life together as an Anglican family of churches.” The primates of those three Anglican provinces are boycotting this Lambeth Conference because of their objection to other Anglican provinces’ approaches to sexuality. It asks Welby and the Standing Committee of the Anglican Communion to report on their progress at the 2023 Anglican Consultative Council meeting.

Douglas said there were differing reactions to some of those specific items, but they were not put to yes or no votes, “so that we can have a substantial set of responses, rather than [pressing] buttons or quietly assenting or yelling. I mean, that that doesn’t build up the Body of Christ. And then we had a prayerful moment at the end, where we stood in prayer, offering these conversations to God and to one another.”