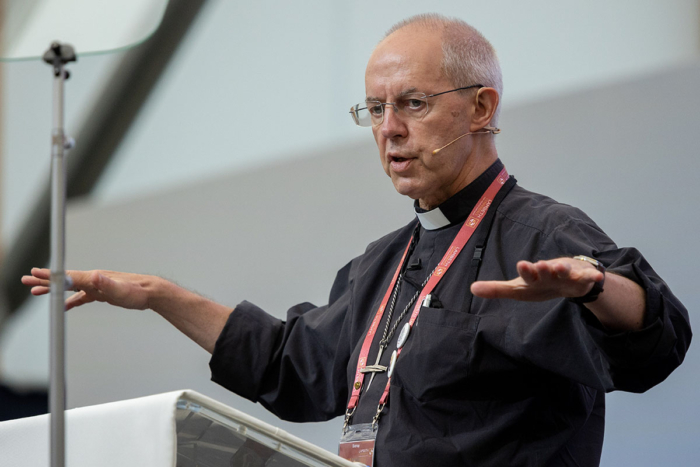 [Episcopal News Service – Canterbury, England] Heading into this Lambeth Conference, a draft of what is known as the Lambeth Call on Human Dignity generated the most discussion, sparking controversy for how it addressed human sexuality even before the start of the July 26-Aug. 8 conference of more than 650 Anglican bishops. But on Aug. 2, when bishops finally took up the Human Dignity Call in closed session, accounts of those discussions bore little evidence of the divisions that simmered on the sidelines during the first half of the conference.

Instead, what resonated for bishops attending the session was the extended introduction by Archbishop of Canterbury Justin Welby, who sought in his remarks to bring the bishops closer together by affirming the sincerity and theological rigor of Anglicans on both sides of the divide over the extent of LGBTQ+ inclusion in the church.

“This is one of the most important sessions of this conference,” Welby said, according to a transcription of his remarks released by the Lambeth Conference. The Human Dignity Call references the need to address racism, exploitation, inequality, gender justice and climate change, but Welby acknowledged that human sexuality is part “of what we believe about human dignity.”

A majority of the more than 80 million Anglicans around the world have deeply held convictions that marriage is for a man and a woman, but others “have not arrived lightly at their ideas that traditional teaching needs to change,” Welby said. “So let us not treat each other lightly or carelessly. We are deeply divided. That will not end soon. We are called by Christ himself both to truth and unity.”

And on the issue of potential sanctions against provinces for their policies on human sexuality, Welby said, “I neither have, nor do I seek, the authority to discipline or exclude a church of the Anglican Communion. I will not do so.”

The session progressed to table discussions by bishops in their small groups, and they rose to conclude in silent prayer, taking no other collective action to express agreement or disagreement with the call itself. The Lambeth Calls were designed as an alternative to resolutions and intended to initiate discussion among the bishops while suggesting action items.

Welby and planners have tried to steer the conference away from focusing narrowly on human sexuality, instead emphasizing points of Christian unity and fellowship while filling the conference’s schedule with discussions of a wide range of topics. The bishops, for example, also will devote a whole day to the environment and sustainable development during a trip to Lambeth Palace in London on Aug. 3.

Divisions had flared, however, over an attempt by conservatives, particularly from what is known as the Global South, to reaffirm Resolution 1.10, which was passed at the 1998 Lambeth Convention and asserts conservative theological positions on human sexuality and marriage, including that marriage is between a man and a woman, and that unmarried people should abstain from sex.

The revised draft of the Lambeth Call on Human Dignity taken up by the bishops references the 1998 resolution’s assertion that “all baptized, believing and faithful persons, regardless of sexual orientation are full members of the Body of Christ.” It also states there is no consensus across all 42 of the Anglican Communion’s autonomous but interdependent provinces on the legitimacy of blessings and marriage rites for same-sex couples. “As bishops we remain committed to listening and walking together to the maximum possible degree, despite our deep disagreement on these issues,” the call says.

In the early evening, Episcopal Church Presiding Bishop Michael Curry described the day’s discussion as a moment of hope.

“I’ve been a bishop 22 years and a priest over 40 years. And I have to tell you that as far as I know, it is the first time a document in the Anglican Communion has recognized that there is a plurality of views on marriage and that these are perspectives that reflect deep theological and biblical work and reflection,” Curry said in a video statement. “That’s why I say today is a hopeful day. There is work to do, but hope can help us run the race and that is set before us.”

Leaders of the Global South Fellowship of Anglican Churches, which includes 22 provinces in the Anglican Communion, most from Africa and Asia, were denied in their attempt at the Lambeth Conference to engineer an official show of majority support for anti-LGBTQ+ stances on marriage and sexuality. On Aug. 2, some Global South bishops announced an alternative plan, to make their case on the conference’s sidelines. They now are asking like-minded bishops from across the Anglican Communion to register their support for their own document reaffirming Resolution 1.10.

South Sudan Archbishop Justin Badi, chairman of the Global South Fellowship, confirmed in an interview with Episcopal News Service earlier in the day that he and other conservative bishops had no intention of raising the issue during the open plenary, as previously planned, and they didn’t press it during the closed discussion of the conference’s Lambeth Call on Human Dignity,

“We wanted to bring [the reaffirmation of 1.10] as any other business in the plenary, but the organizers said, ‘No, that cannot happen,’” Badi said. Instead, their stated goal now is a show of support for their own reaffirmation document, “reminding people” of what was passed in 1998.

The document will eventually be presented to Welby, who convened this Lambeth Conference, but the Global South bishops are not asking Welby to take any action on the document. When asked about his earlier call to “impose sanctions” on The Episcopal Church and at least five other provinces with inclusive LGBTQ+ policies, Badi told ENS that such action will no longer be pursued at this Lambeth Conference.

The initial draft of the Human Dignity Call included language favored by conservative bishops reaffirming 1.10, which stated that homosexuality is forbidden, marriage is only for heterosexual couples and unmarried people should practice abstinence. Conference planners revised that call after some bishops, including from The Episcopal Church, raised concerns about the original language and the process for accepting it.

Resolution 1.10 is bigger than the Lambeth Conference, Badi told ENS. “Why we take it to be important [is] because it has the authority of the Bible.”

Welby spoke to the biblical underpinnings of the conservative bishops’ beliefs in his remarks during the Human Dignity Call. “For them, to question this teaching is unthinkable, and in many countries would make the church a victim of derision, contempt and even attack,” Welby said. “For many churches to change traditional teaching challenges their very existence.”

He drew a direct parallel to the discernment of provinces like The Episcopal Church that reached a different conclusion on human sexuality. “They are not careless about scripture. They do not reject Christ. But they have come to a different view on sexuality after long prayer, deep study and reflection on understandings of human nature,” Welby said. “For these churches not to change traditional teaching challenges their very existence.”

The focus on human dignity has roots in the Anglican tradition. The Baptismal Covenant in The Episcopal Church’s Book of Common Prayer, for example, calls on Episcopalians to “strive for justice and peace among all people, and respect the dignity of every human being.”

It remains uncertain how much support the Global South Fellowship of Anglican Churches will receive for its push to reaffirm Resolution 1.10. Bishops are asked to register their support via email by noon on Aug. 4, with results to follow “in due course.” Some bishops from the 22 member provinces have told ENS that they agree with the language of the document, though the bishops are not all of one mind on how strongly to press against the actions of other provinces.

The reaffirmation of 1.10 “is right,” Tanzania Archbishop Maimbo Mndolwa told ENS, but he added that he is opposed to one province telling another province what to do, including on matters of human sexuality. He also questioned the real source of energy on this issue. “There has been a tendency over many years of some people from the Global North to use provinces from the Global South to champion their own ideas,” he said, without specifying who might be pressing their influence.

The Global South Fellowship of Anglican Churches is a fellowship, Mndolwa said, but not an organization that speaks directly for all member provinces. He also distanced himself and his province from the decision of leaders in the provinces of Nigeria, Rwanda and Uganda to skip this Lambeth Conference and other Anglican Communion meetings. “We don’t want to be separatists,” Mndolwa said of his province. “We are here to dialogue. We are here to debate. We are not here to fight.”

South African Archbishop Thabo Makgoba spoke about the Human Dignity Call in a morning press conference. “We are all made in the image of God,” he said. The call “seeks to remind us of that.” He also stressed that the call is not just about human sexuality.

“Please, let’s move away from a single issue and move to the broader issues,” Makgoba said.

Arizona Bishop Jennifer Reddall told ENS before the afternoon sessions that she and other progressive bishops have been grappling with how to affirm their support for LGBTQ+ inclusion in The Episcopal Church while remaining open to the views of their more conservative counterparts. “I’m enjoying much of the dialogue. I enjoy conversation across difference,” she said.

On the Human Dignity Call, “I think the LGBTQ differences are very real and very painful personally,” she said, while adding, “it’s not the whole story” of the Lambeth Conference.

Overall, however, Reddall worries that too much is being packed into a short period of time, making it difficult to fully consider each individual call. “These are deep questions that are worthy of so much more conversation and time than we have,” she said.

In the afternoon, as the Global South Fellowship was launching its effort to generate support for document reaffirming the full text of Resolution 1.10, Welby issued a written statement responding to the controversy. He affirmed “the validity of the resolution passed at the Lambeth Conference 1998.” At the same time, the Human Dignity Call’s acknowledgement of differences from province to province “states the reality of life in the Communion today,” Welby said.

“What is also clear is that Lambeth 1.10 itself continues to be a source of pain, anxiety and contention among us,” Welby continued. “That has been very clear over the course of this Lambeth Conference. That is also part of the current reality of our communion. To be reconciled to one another across such divides is not something we can achieve by ourselves.”