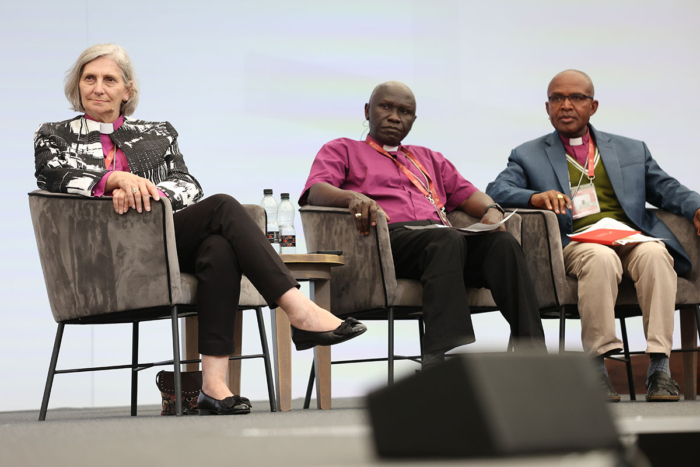 Archbishop of Perth Kay Goldsworthy, Archbishop Anthony Poggo, advisor to the archbishop of Canterbury on Anglican Communion affairs, and Archbishop Maimbo Mndolwa, of the Anglican Church of Tanzania, spoke during the Aug. 1 panel on Anglican Identity. Photo: Lambeth Conference Media

[Episcopal News Service – Canterbury, England] Bishops from across the Anglican Communion who are attending the Lambeth Conference hit the halfway mark of their time here on Aug. 1. The day’s focus on Anglican identity introduced the first of what look to be more challenging issues at a conference intended primarily to focus on unifying themes, and a follow-up discussion Aug. 2 on human dignity could turn to disagreements over same-sex marriage that flared even before the conference officially began.

More than 650 bishops representing most of the Anglican Communion’s 42 provinces have traveled to Canterbury to attend the typically once-a-decade conference July 26-Aug. 8. Representing some 165 countries, each has brought personal experiences and local context to the discussions with fellow bishops. Archbishop of Canterbury Justin Welby, who convenes the conference, has challenged the bishops to embrace commonalities in their uniquely Anglican expressions of the Christian faith.

“We are divided by many things. How do we come together as God’s holy people, as one in Christ? How do we listen to each other’s stories?” Welby said while leading the morning’s Bible exposition. Welby chose the New Testament letter of 1 Peter as the biblical foundation for this conference, along with the theme “God’s Church for God’s World.” The early Christians in 1 Peter maintained hope in the face of persecution and exile by centering themselves in God’s call to be holy, Welby said.

“Holiness is connected both to God and to act,” the archbishop said. “It doesn’t hide us away in a holy huddle.” But he also warned against the temptation to “weaponize” holiness. It doesn’t mean to separate ourselves, he said or “to exclude that which is not holy.”

The Bible exposition and the midday plenary discussion both featured videos with clergy and laity offering a wide variety of perspectives on what it means to be Anglican, and the bishops who participated in each session shared some of the ways that Anglican and Episcopal churches are witnessing to faith in their local contexts.

The specific divisions that have flared at the sides of this conference, particularly over theological disagreements about human sexuality, have remained unspoken at the day’s two public sessions. A group of conservative bishops from the Global South, mostly Africa and Asia, had threatened to force consideration at the plenary session of a resolution affirming majority opposition to same-sex marriage, but no such resolution was presented. On Aug. 1, a Lambeth Palace spokesperson confirmed that Welby met July 30 with bishop members of the Global South Fellowship of Anglican Churches, including its chairman, South Sudan Archbishop Justin Badi, in a “planned” meeting, though no further explanation was given. A spokesman for the Global South Fellowship of Anglican Churches, refused to provide Episcopal News Service with an update.

One of the Global South Fellowship’s member bishops, Archbishop Maimbo Mndolwa, however, appeared to reference the controversy at least indirectly in his remarks as a member of the plenary session’s panel of archbishops.

Mndolwa spent most of his Aug. 1 morning presentation discussing how his province, the Anglican Church of Tanzania, has been able to accommodate three very different strains of Anglicanism: Anglo-Catholic, evangelical and charismatic. “Each one holds different emphasis and opinion. In that case, they all build three different churches, but in one country,” Mndolwa said. He also explained how provinces across Africa have found ways to work together as Anglicans despite their regional differences.

Mndolwa concluded his remarks by addressing his fellow Global South bishops, as well as their counterparts in The Episcopal Church and other Western and European provinces. He used the metaphor of Britain’s “mind the gap” transit signs to make his point.

“My brothers and sisters all in this conference, we should keep in mind that we have many differences, and those differences, which are created by God, are here to save us, not to break our relationships.”

The bishops met in closed session in the afternoon to discuss the Lambeth Call on Anglican Identity, the third in a planned set of 10 Lambeth Calls that Welby and conference planners have envisioned as a consensus-building tool on a range of topics. The ultimate goal has been to finalize written calls to action on a range of topics relevant to the church, from evangelism to reconciliation, though the process got off to a rocky start amid discontent over its quasi-legislative voting process.

As originally planned, electronic devices were used on the first business day, July 30, to allow the bishops to register their level of acceptance of the draft Call on Mission and Evangelism, but on July 31, Welby and conference planners announced they were scrapping the devices in favor of a process similar to assent by vocal acclamation. For that day’s session, on the Lambeth Call on Safe Church, bishops submitted feedback from their discussions in small groups, and Welby took that feedback to mean that the draft was heading in the right direction, according to the accounts of some Episcopal bishops.

“Instead of having us vote electronically, he will listen to such debate as there is on the remaining calls, tell us if he thinks we think they’re on the right track or not, and invite folks who disagree to shout ‘no!’” Los Angeles Bishop John Harvey Taylor said in a recap on Facebook. Taylor suggested that he is satisfied the voting process is “fixed.”

That process, still described by planners as “work in progress,” still could feel the strain of more divisive topics later this week, and the Aug. 1 discussion of the Anglican Identity Call marked the first time that bishops appeared to reject part of a draft Lambeth Call.

There is nothing overtly controversial in the Anglican Identity Call’s affirmation portion, which delineates the key tenets of Anglicanism, from Scripture, creeds and sacraments to the four Instruments of Communion: the Archbishop of Canterbury, the Lambeth Conference, the Anglican Consultative Council and the Primates Meeting.

The bishops offered a mixed response, however, to the calls’ “specific requests,” or action items. One of the items suggested studying and possibly organizing an Anglican Congress, which could bring together Anglicans from across the world but also would require a significant financial commitment. That idea was generally endorsed, with bishops expressing “clear energy and support for the idea,” Archbishop Philip Richardson, who chaired then Anglican Identity Call’s drafting group, said at an evening news conference.

The call also suggests revitalizing the Marks of Mission, which the communion has turned to in the past as a framework for Anglican engagement with the world. That item generated less interest, as did another item suggesting a study of the Instruments of Communion, said Richardson, who heads the Anglican Church in Aotearoa, New Zealand and Polynesia.

A proposal to consider expanding the Instruments of Communion “received a pretty strong negative response,” Richardson said, and it likely will be dropped from the call. He said his drafting group will take all of this feedback into account as it further revises Anglican Identity Call for eventual release to bishops.

On Aug. 2, the bishops are scheduled to take up the Lambeth Call on Human Dignity, which generated controversy even before bishops arrived in Canterbury. An initial draft of the call included language favored by the Global South Fellowship of Anglian Churches that would have reaffirmed Resolution 1.10 from the 1998 Lambeth Conference stating that homosexuality is forbidden, marriage is only for heterosexual couples and unmarried people should practice abstinence.

In response to concerns raised by bishops from more LGBTQ+ inclusive provinces, including The Episcopal Church, conference planners revised the Human Dignity Call. It still references the 1998 resolution’s assertion that “all baptized, believing and faithful persons, regardless of sexual orientation are full members of the Body of Christ” while now acknowledging that there is no consensus across all 42 of the Anglican Communion’s provinces on the legitimacy of blessings and marriage rites for same-sex couples.

Maine Bishop Thomas Brown, one of four gay and lesbian Episcopal bishops attending the conference at Welby’s invitation, a historic first, told ENS after the Aug. 1 plenary that he is pleased by both the revisions to the Human Dignity Call and the decision to eliminate electronic voting. He explained that he is more interested in engaging in conversations with other bishops on these issues than sounding alarms about any final outcome of this Lambeth Conference.

“I think it’s important to keep the Lambeth Conference in perspective. … This is not the General Convention,” Brown said, referencing The Episcopal Church’s governing body, which met a month ago in Baltimore, Maryland.

The Lambeth Conference, by contrast, is “not a legislative gathering,” he said. “It doesn’t have binding authority. So, if there are people who want 1.10 back – and there are those of us who certainly don’t – that’s an occasion for a conversation about our different understanding of marriage and sexuality.”

The conservative primates, from the Anglican provinces in Nigeria, Rwanda and Uganda, refused to attend this Lambeth Conference and advised the provinces’ bishops to do the same, continuing their protest against the inclusive LGBTQ+ policies of The Episcopal Church and some other provinces. During a morning news briefing on Aug. 1, Bishop Anthony Poggo, Welby’s adviser on Anglican Communion affairs, responded to a question about the absent primates, saying, “the door remains open.”

“Personally, I believe it’s better to be in the room to raise concerns that you have,” said Poggo, who is from South Sudan.

Poggo also spoke of his experiences traveling around the Anglican Communion. “People are happy to be part of this family of churches across different parts of the world,” he said, and he cited the liturgies all rooted in the Anglican prayer book tradition as a particularly unifying aspect of Anglian identity.

Several Episcopal bishops have told ENS that their Bible studies and small group discussions with counterparts from around the world, including Global South bishops, have been cordial and illuminating despite their differences on certain issues.

“Everywhere I have offered a word of peace or welcome, it has been received with great civility and sometimes with warmth,” Massachusetts Bishop Suffragan Gayle Harris told ENS.

“In my small group, for instance, I’m the facilitator. And it’s six men and me, and three of the men are from parts of the world that don’t actually enjoy women’s ministry,” Duncan-Probe said. “And they have been very respectful and very kind.”

Harris has had similar experiences with her discussion group, which includes Badi, the chairman of the Global South Fellowship. Badi has “made his position very clear,” Harris said, “and yet at the same time has not shown disrespect, but rather concern about the division.”