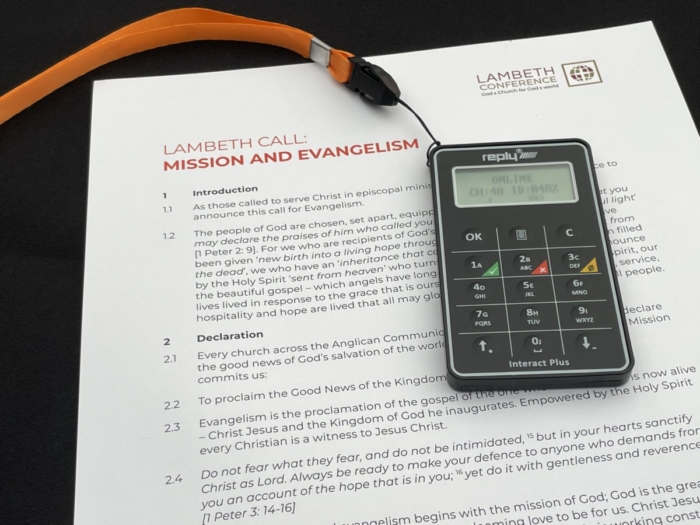 A voting device sits on top of a copy of the draft Lambeth Call on Mission and Evangelism during the Lambeth Conference on July 30, 2022. Photo: Frank Logue

[Episcopal News Service] Archbishop of Canterbury Justin Welby outlined changes to the Lambeth Calls process in a closed session with bishops July 31 to discuss the Lambeth Call on Safe Church, according to a media update.

The bishops will continue to discuss the calls at their tables, recording feedback and observations, to inform the group working on Phase 3 of the conference. Up to six groups of bishops will have the opportunity to give verbal feedback during each session, on a randomly selected basis.

Having listened to the bishops, Welby advised delegates that electronic recording of their views of the calls will not be conducted for the remaining calls. Instead of a recorded vote, bishops will be given an opportunity at the end of each session to indicate by voice their agreement, concerns or opposition. That feedback will help determine how to proceed with the call, if at all.

At the July 31 session, Welby asked the bishops to register their agreement with the Call on Safe Church by remaining silent, a bishop in attendance told Episcopal News Service, and those who objected were encouraged to raise their voices, which none did. It is unclear, however, if this exact process can be replicated for future calls, particularly ones likely to generate more disagreement.

At a news conference later in the day, Bishop Tim Thornton, who heads the conference planners’ Lambeth Calls subgroup, described the changes as “work in process” — but not “a work in progress” — indicating that the planners continue to respond to feedback and adjust.

Planners of this 15th Lambeth Conference instituted a “Lambeth Calls” process in lieu of resolutions, partly in recognition that neither Welby nor the Lambeth Conference has authority over its 42 member provinces, including The Episcopal Church. Prior to July 31, after daily discussions, the Lambeth Calls reports were to be finalized with a consensus-building process similar to voting, though planners had preferred not to describe it as a vote.

After discussing the draft version of each of the Lambeth Calls, bishops were to be given electronic devices to indicate their view in one of three ways: “This Call speaks for me,” “This Call requires further discernment” or “This Call does not speak for me.”

Even before the conference, the appearance of a voting process caused a stir, particularly because the “does not speak for me” initially was not an option. It was added later, along with revisions to the calls themselves based on pre-conference feedback from bishops. On July 30, bishops used the electronic devices for the Lambeth Call on Evangelism and Mission, with nearly all participating bishops saying they either agreed or favored moving forward with more discernment.

Participation in that first vote, however, barely topped 450 bishops, raising questions about the validity of the process.

Following on the changes announced July 31, if the calls receive a clear verbal assent, they will be sent forward for further work in Phase 3.

This conference, themed “God’s Church for God’s World,” is taking place over three phases. Phase 1, or the listening phase, happened in the year leading up to the conference. Bishops’ conversations were held during a series of optional virtual meetings beginning in July 2021. Reflecting on themes from 1 Peter, the groups incorporated time for prayer and Bible study, sharing ministry experiences and stories and discussing what it meant for the Anglican Communion to be responsive to the needs of a fast-changing world.

Phase 2 is the conference itself, which is meeting through Aug. 8 on the campus of Kent University in Canterbury. Phase 3 will follow the conference, during which Episcopal and Anglican bishops will return to their dioceses and churches and invite their communities to enact the calls into the next decade.

The Lambeth Conference, though typically held once a decade, last met 14 years ago in 2008.