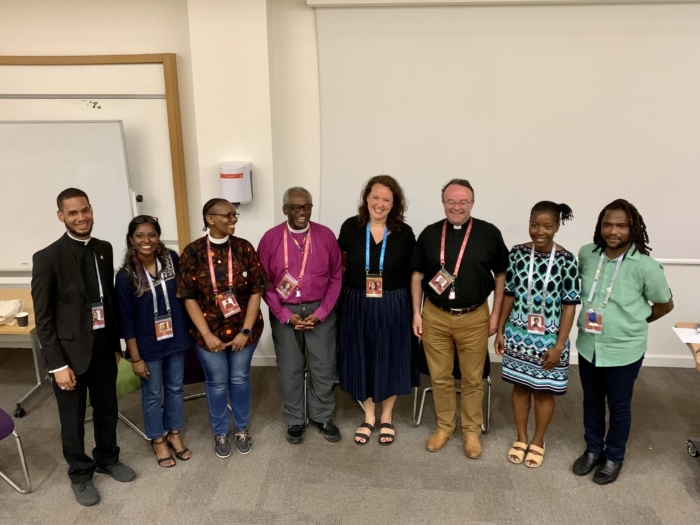 It’s a question frequently heard in Episcopal churches as the denomination’s membership ages. But in a panel discussion at the Lambeth Conference on July 30, younger Anglican leaders suggested answering that question by first answering some more specific questions: “Who are they?” “Where are they?” “What do they need?”

The “Missional Formation with Young People” discussion included input from leaders in the Bahamas, Sri Lanka, Lesotho and the United Kingdom, as well as Presiding Bishop Michael Curry.

The panelists expressed a desire to be more thoughtful in the language used to describe the place of young people in the church.

“‘Missional formation’: Is it just about ordination?” asked the Rev. Cathrine Ngangira, moderator, priest in the Church of England and one of the Anglican Communion Youth Network conveners.

“Because sometimes when you think about it, we think we are talking about, ‘How can we make priests?’ … Missional formation is not about ordination. We are not just saying, ‘If we have done it well, we’ll end up with 100 priests in our diocese,’ but we are saying, ‘How can we have the young people being able to go out into the world and share the message?’”

Curry said he was encouraged by the attention to the “high calling” of youth ministry, which is a crucial part of evangelism, even if it is not always recognized as such.

“I just encourage us to claim that high calling, because we honor young people by taking their souls seriously, making them not into our image – we don’t need little Michael Currys – but little Jesus Christs would do.”

One panelist, the Rev. Jeremy Duff of the Church in Wales, suggested another basic question to reconsider in order to understand ministry with young people: What is a “young person,” anyway?

“I think a big problem is, how on Earth do we think someone is a young person when they’re 30?” he asked.

Duff, 50, said he became a Christian at 13 and had his first “formational experience” when he joined the British Army at 18.

“In the army, at 19 or 20, I was leading soldiers. And by the time you’re 37, you leave because you’re too old. So I went from that experience … into the church, where people are saying you’re a young person until the age of 35.”

The Rev. Ruel Strachan, a priest in the Bahamas in the Church in the Province of the West Indies, offered an example of what it looks like when a church starts investing in the formation of its young members much earlier.

“I’ve never known a time in my life when I was not engaged in the work of the church,” he said. “By the time I was born, my parish had only been established in the Bahamas for about 25 years … My home church was a priest and about five people in a living room … There was still a lot of work to do. Thank God, young people were allowed to be a part of that work.”

Jessica Christy, youth coordinator in Colombo, Sri Lanka, in the Church of Ceylon, said gender and race make it even more difficult to claim leadership roles. Despite all the preparation and commitment she has, there will always be “one game-changing factor, and that is because I’m a girl.”

“Back home, there will always be a few things that my brother can do which I can’t do,” she said.

For Christy, youth leadership is especially important because of the political and economic crisis her country is currently experiencing.

“Even when we’re looking at the situation of the country, it’s very inspiring to see the young people take the initiative and step forward and say, ‘Look, this is our future. And if we don’t change it, who is going to change? Even in the life of the church, I’m really happy to see that.

“There has been a gradual change and younger people are stepping forward, … taking charge, coming into the committees and in the decision-making boards that we should be in. It’s not easy to get there, but when we get there, we make sure that we are heard.”

Even when she reaches a leadership position in the church, she said, her ministry is still affected by something she says is pervasive in youth ministry: “tokenism.”

“I fit in all those boxes because I’m ethnic, I’m Tamil, I’m a girl. So that’s how I’m involved in 100 committees, but how many of those committees would actually listen to what I have to say?”

Bishop Vicentia Kgabe from the Diocese of Lesotho in the Anglican Church of Southern Africa said she comes “from a context where you only see [young people], but you’re not going to hear them, and that has done so much damage in the life of the church, raising faithful disciples, because we like them young and quiet.

“The minute they start talking and having an opinion, we put them out. … I’m hearing and I’m seeing young people saying, ‘We are partners in this mission.’”

So how can current church leaders change the culture around youth leadership? Christy said it’s critical to make sure potential leaders are not being passed over.

“Something that I’d like if the church leaders could really take back is, take a look at your girls,” she said. “Really look at them, really listen to them, because they do have a lot to offer. There’s been so many instances where there will be a girl who might be more qualified or more spiritually aware of the situation or something, but she would easily be overlooked because there was another boy sitting next to her.”

Kgabe and Duff said it’s also important to simply put younger people in leadership roles even when it’s risky, and even when older people object.

“Failing is not the end of the world,” Kgabe said. “How do we fail publicly and own up and say, ‘It’s OK?’”

“If we got a random selection of congregation members,” Duff said, “they would all want young people to be finding that place in the church, and for them to be the leaders of the future. I really think they want that. They may struggle with some of the ways of achieving it. And I think that’s what old folks like me need to do. To say, ‘Look, [we’ve] agreed with the outcome. Trust that it’s going to work.’”