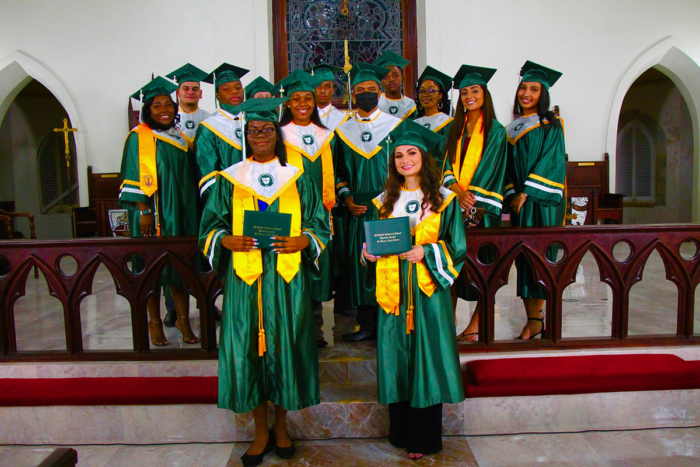 [Episcopal News Service] For nearly half of Trevor Bridgewater’s life, St. Mary’s Church in Virgin Gorda, in the Episcopal Diocese of the Virgin Islands, had been without a priest.

Then the Rev. Ellis Clifton arrived last November, as part of an initiative of The Episcopal Church’s Office of African Descent Ministries programs, and “Father Fireball” as he is affectionately known, has inspired visions of planting new congregations, and serving as a community hub. Attendance has tripled, and the church has added a second Sunday morning service, said Bridgewater, 30, the senior warden.

The Episcopal Diocese of the Virgin Islands, in partnership with The Episcopal Church Office of African Descent Ministries, formerly known as the office of Black ministries, has embarked upon programs to offer clergy support to several Virgin Island churches, that have been without ordained leadership for significant periods of time.

One program involves short-term stays of two-to-four weeks, providing Sunday worship, pastoral care and Christian formation in exchange for airfare, a place to live and a small stipend. Another program involves longer-term stays, of several years, with similar terms, according to the Rev. Ron Byrd, African descent ministries missioner. 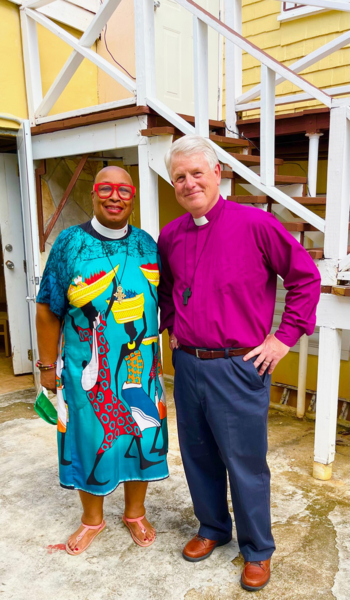 The Rev.Canon Sandye Wilson, left, interim dean at Cathedral of All Saints in St.Thomas in the Episcopal Diocese of the Virgin Islands, collaborates with Provisional Bishop Scott Benhase, retired bishop of Georgia, to create new hope and ministries for congregations that have been without clergy for years. Photo: All Saints Cathedral

“It’s a great journey. They are beautiful islands down there and nobody pays attention to them, at least that’s the way they feel,” Byrd said. “My mission is to bring them into fuller participation in The Episcopal Church.”

Visiting clergy already have made a visible impact.

Now, “we’ve seen incredible turnaround,” Bridgewater said. “Fr. Clifton brings new, fresh energy. Now we are in the process of finishing the construction of a barbecue pit in a park we own. The park had been dormant and inactive. Members of the church cleaned it up and we are opening it to the community to bring their children for family-oriented activities.”

Similarly, the 173-year-old Cathedral of All Saints on a neighboring island, St. Thomas, had been without a consistent dean for more than a decade, and the spiritual toll was apparent, among the congregation and students of the century-old pre-k through 12th-grade school it operates, when the Very Rev. Sandye Wilson began serving as interim dean in December 2020.

The school’s student body is about 200, a decline from previous years, “due to the reality of hurricanes over time, and families leaving the island or sending their kids away,” Wilson said.

“The students are resilient but, talk about generational trauma. This year’s class had two hurricanes that came within two weeks of each other. Then there was the George Floyd murder and then the pandemic, and mass shootings.”

Like Clifton, Wilson had responded to a call from Byrd, to “become hope peddlers in what sometimes feels like a hopeless world,” she said, by serving in a diocese, where at least half its 14 churches were without clergy.

“Ron Byrd is an innovative, entrepreneurial leader, who looks at the fact that often we have been passive about responding to the needs of congregations and clergy,” Wilson said. “He has lit a fire under many of us. He’s very clear about the fact that clergy can come for a couple of weeks and bring a spirit of respect as well as excitement about the living God, to share with others.”

Byrd created the initiative in response to a request for assistance from former Bishop Ambrose Gumbs and it is funded through his office.

“Bishop Gumbs came to me in 2018 and said we really need help in the Virgin Islands,” Byrd recalled. “‘We are worth saving’, Gumbs said. It was really a call for help, and this is just one of many programs and activities we have launched in the Virgin Islands as they are on their way to recovery.”

At the time, it was still early in the diocese’s recovery from two devastating category-5 hurricanes—Irma tore through the islands on Sept. 6, 2017, followed by Maria 10 days later. Irma, considered the strongest Atlantic Ocean hurricane ever measured, killed four people and damaged or destroyed 85% of the housing stock on Tortola Island. On Sept. 16, Maria struck St. Croix, damaging, or destroying 70% of buildings, including schools and the island’s only hospital, and knocking out the power grid and communications systems.

Byrd had initially lined up at least six visiting supply clergy, ready to go for short-term stays. Then, COVID-19 happened, Gumbs retired on May 31, 2021 and Byrd decided to expand the program to add a longer-term initiative.

“Ron’s program is hugely important,” according to retired Georgia Bishop Scott Benhase, who is serving as provisional bishop of the Virgin Islands. “Ron and the Office of African Descent Ministries have been extremely wonderful and supportive. We need more clergy to do this, to make longer-term commitments.” 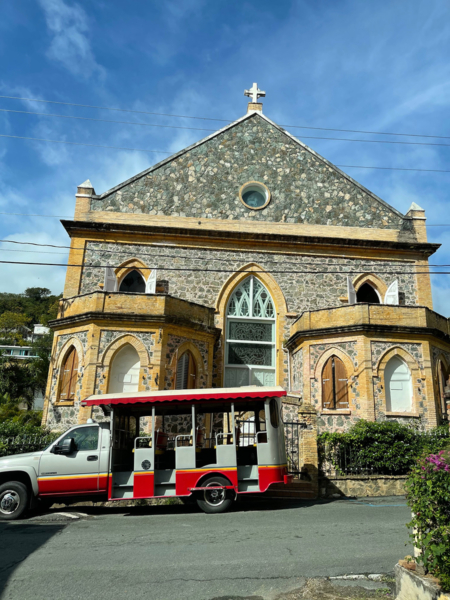 The 173-year-old All Saints Cathedral on St. Thomas in the Virgin Islands is enjoying a revival and will be hosting one for the entire community later in the year featuring the Rev. Lester Mackenzie, chaplain to the House of Deputies. Photo: Sandye Wilson

The diocese’s inability to offer competitive salaries has been a deterrent for full-time clergy, but such positions could be attractive to those on sabbatical or between calls or retired, Benhase said.

“The people here are amazing folks. Most either work in education or the tourism industry. They are proud, with a wonderful sense of humor, deeply committed to the church and doing lots of ministry in their neighborhoods and immediate communities.”

When Clifton arrived he was newly retired, recently widowed and ready for a change. “When Covid travel restrictions lifted, I jumped at the chance, and I have not regretted it one day. I live in the church rectory and it’s the finest place I’ve lived since I’ve been ordained. There is a breathtaking ocean view from the back porch, and I wake up each morning in time to see the sunrise.”

Yvonne O’Neal, a lay leader in the Diocese of New York who grew up at St. Mary’s, preached at Clifton’s welcoming service. “Ellis so loves the island. He is a go-getter,” she said. “He’s out and about in the community. He’s formed alliances with other faith groups and leadership. Attendance has picked up. People like him; he’s very inviting. People who had stopped going to church are coming back. I have high hopes for St. Mary’s.”

Clifton sees a renewed energy as well. Sunday school young adult programs and Bible study groups have revived, and “I’ve been blown away by the number of people who will stop in the church just to pray,” he said.

St. Mary’s has hosted community gatherings and offered worship opportunities to grieve the hurricanes. “People died because of the hurricanes. There were problems rebuilding because the church was under-insured. There was a situation where Church Insurance was not licensed to do business in the British Virgin Islands. So, insurance continues to be a problem.”

At the 2022 annual meeting in February, many of the “old guard” who had led morning prayer in the absence of clergy, handed the reins to the younger generation, entrusting them with, “the promise for the future. This is highly unusual, compared to other congregations I’ve served,” he said.

The Hon. Vincent Wheatley, a member who serves in local government, said St. Mary’s is resuming its former role “as the beacon on the hill.”

Wheatley, who had attended St. Mary’s school, said the church’s influence had diminished with the lack of clergy support, until now. Clifton “is a great teacher, an inspirational leader. In a very short time, he’s made a huge impact. He brings energy, ideas, and vision to improve our community. When the church is strong, the community is stronger.”

Similarly, Wilson has brought fresh energy and strong leadership to All Saints Cathedral, according to Eleanor Christian, a long-time member, and the cathedral’s bookkeeper.

“She is innovative in trying to spice up our services, with a variety of creative things. She is a strong, innovative leader,” she told ENS in a phone interview.

For example, “Some of our work has been recapturing our identity as a cathedral, as the mother church of the diocese, as a center for unity and learning,” Wilson said.  There are plans to market the cathedral and the community as a wedding and event destination.

“That’s one of the big projects we’re looking forward to, how to be a place of hospitality for folks with significant events happening in their lives, to come and enjoy the hospitality of the city. It has lots of wonderful things to offer, including beautiful beaches.”

A September revival is planned for the entire community, featuring the Rev. Lester Mackenzie, chaplain to the House of Deputies and rector of St. Mary’s Church in Laguna Beach, in the Diocese of Los Angeles.

“These are some of the kinds of things we can bring, with our contacts with people in the wider church,” Wilson said. “We’ve also had a slew of funerals. We are getting to be known as the place with wonderful funerals, which is a form of evangelism, too. We insist on making sure we share not only the hope of the resurrection, but also that you’re named in baptism, and in death, and that your story comes alive in the spirit of the Gospel.”

For Wilson, who June 24, celebrated the 42nd anniversary of her ordination to the priesthood, serving in the Virgin Islands feels like a homecoming.

“When I go places, and into stores, people are like, ‘I know who you are, I listen to you every Sunday night on the radio.’ Radio is a form of evangelism for us that works really well,” she said. “It is very important to people here. It was very important during the hurricanes. We’re on WSTA every Sunday night, at 8:30 p.m., which people on the mainland can stream also. We have services on Facebook Live every Sunday morning.”

She recalled that “53 years ago, I was here, representing the Diocese of Maryland as part of a team of young people who worked on St. Croix and St. Thomas. We were working with young people whose parents worked in the sugar cane fields. We learned how to serve on the altar, and then we went back home to a Baltimore [Maryland] church where the priest told us he would rather drop dead before he’d see a girl serve on the altar.

“My call to ministry was manifested in my time in St. Croix and St. Thomas. I knew I wanted to be a priest then,” she said. “This was the place where all of that possibility got started. Life comes full circle.”

The diocese encompasses 14 churches on three islands in both the American and the British Virgin Islands and is one of two predominantly Black dioceses in The Episcopal Church, the other being the Diocese of Haiti.