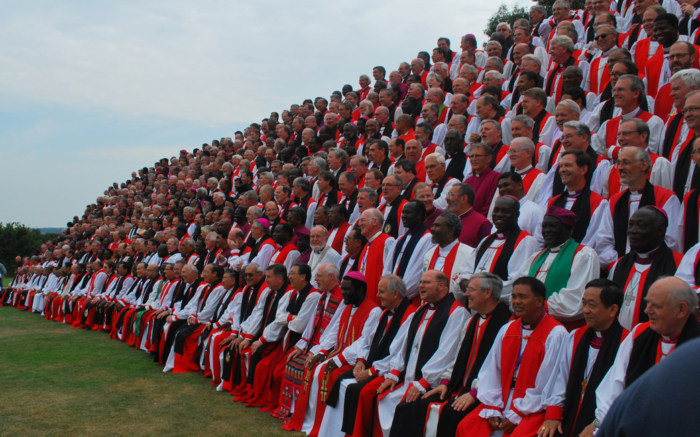 The bishops at the 2008 Lambeth Conference of bishops pose July 25 for the traditional group photo. Photo: Anglican Archives

[Episcopal News Service] Facing an uproar from some bishops, particularly from within The Episcopal Church, planners of the upcoming Lambeth Conference of Anglican bishops significantly rewrote part of the preparatory “Lambeth Calls” document, eliminating language from an earlier draft that had affirmed a 24-year-old resolution opposing same-sex marriage.

The changes to the Call on Human Dignity were endorsed by that call’s drafting group “following consideration of widespread responses from bishops and others,” the Lambeth Conference said in a news release on July 26. A member of that drafting group, Toronto Bishop Kevin Robertson of the Anglican Church of Canada, had said this week that the language opposing same-sex marriage was never discussed or approved by the drafting group.

Revisions also were made to three other Lambeth Calls, on discipleship, mission and evangelism and interfaith relations.

“We have listened carefully and prayerfully to what bishops and many others have said in response to the draft Calls, especially that on Human Dignity. Archbishop Justin has invited the bishops of the Anglican Communion to come together as a family to listen, pray and discern – sometimes across deeply held differences,” Bishop Tim Thornton, chair of the Lambeth Conference’s Lambeth Calls subgroup, said in the news release. “It is our prayer that these Calls can offer a basis for those conversations, and that all of our discussions will be marked by the grace and love of Jesus Christ.”

The planners of the conference in Canterbury, England, have described the 10 calls as “short written statements that include declarations, affirmations and common ‘calls’ to the church and the world that the bishops want to make.” Each call was developed by a drafting group that included bishops “representing Anglican churches from around the Anglican Communion,” according the Lambeth study guide.

When the study guide and drafts were released on July 18, the Lambeth Call on Human Dignity referenced the need for the Anglican Communion to confront its history of colonialism while addressing “the ongoing climate emergency,” working toward more just economic systems, alleviating poverty and standing “in witness against injustice.” But it also ignited a firestorm of criticism from Episcopal bishops over language that would have affirmed a 1998 Lambeth Conference resolution opposing same-sex marriage.

The initial draft stated it sought “a reaffirmation of Lambeth 1.10 that upholds marriage as between a man and a woman and requires deeper work to uphold the dignity and witness of LGBTQ Anglicans” – language that echoed the demands of conservative Anglican bishops who are members of the Global South Fellowship of Anglican Churches.

The revised Lambeth Call on Human Dignity still references the 1998 resolution’s assertion that “all baptized, believing and faithful persons, regardless of sexual orientation are full members of the Body of Christ” while now acknowledging that there is no consensus across all 42 of the Anglican Communion’s provinces on the legitimacy of blessings and marriage rites for same-sex couples.

“As bishops we remain committed to listening and walking together to the maximum possible degree, despite our deep disagreement on these issues,” the revised call says.

The Lambeth Conference is called by the archbishop of Canterbury, typically once a decade. More than 650 bishops and 480 spouses were registered to attend as of last month, including more than 100 from The Episcopal Church. Archbishop of Canterbury Justin Welby invited partnered gay and lesbian bishops for the first time but declined to invite their spouses. The husband of Robertson, the Toronto bishop, was among the spouses Welby declined to invite.

Presiding Bishop Michael Curry, who will be attending his first Lambeth Conference as presiding bishop, alluded to the “rapidly changing” situation in a July 25 news release.

“For now, I offer this message of love to all my LGBTQ+ siblings: We have worked hard to become a church where, as the old African slaves used to sing, “There is plenty good room, plenty good room,” for all of God’s children,” Curry said. “We are all The Episcopal Church, and we will not compromise who we are, our connections, or our love. We head to this conference with you in our hearts and Jesus’ Way of Love as our guide.

Curry also said the Episcopal bishops will gather in person on July 27 in Canterbury “to discern its way forward” before the conference begins.