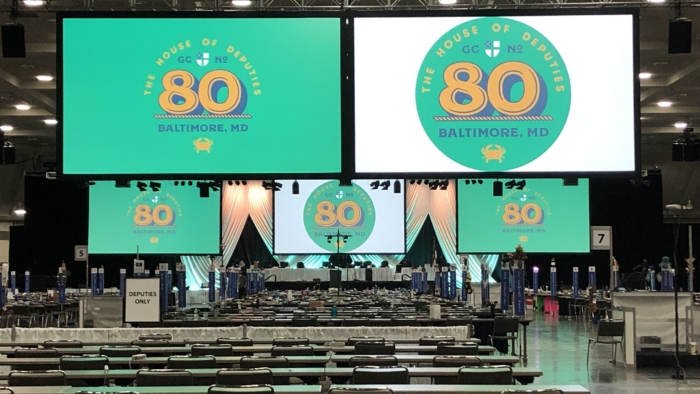 Of the more than 400 resolutions proposed to the 80th General Convention, only 17 were deferred until 2024 under a process meant to streamline the meeting in Baltimore, Maryland. Photo: David Paulsen/Episcopal News Service

[Episcopal News Service] The 80th General Convention left some unfinished business when it adjourned last week. That was partly by design.

Part of the presiding officers’ plan to streamline this meeting of The Episcopal Church’s bicameral governing body in Baltimore, Maryland, was to allow committees the option of deferring some less timely resolutions to 2024, when the 81st General Convention is scheduled to convene in Louisville, Kentucky. Bishops and deputies spent July 8-11 in Baltimore considering critical governance matters, such as elections and the churchwide budget, and other resolutions deemed urgent, so eight days of business could be reduced to four.

That plan succeeded in beating the clock. Both the House of Bishops and House of Deputies adjourned before lunch on July 11, the fourth and last day of General Convention, with no final afternoon legislative sessions. The efficiency of the scaled-down meeting prompted some church leaders to speculate whether the post-pandemic church would need to resume holding triennial General Conventions that last up to two weeks.

If everything is done by lunch today, maybe the old 14 day marathon wasnt as necessary as we thought? #gc80

So, it appears the necessary work of the church can be accomplished in many fewer days than we have been acustomed to. A lesson worthy of taking to heart.

The deferred resolutions could factor into those discussions: Will the unfinished business in Baltimore mean a lot more work for bishops and deputies in Louisville?

The short answer is, probably not. The reason is that there wasn’t much unfinished business after all. Most of the resolutions proposed to the 80th General Convention, including some that would have generated lively floor debates at past meetings, were not brought to the floor and instead were adopted in single-vote batches using what is known as the consent calendar. And with legislative committees holding meetings and hearings online in advance of General Convention for the first time, few of the committees opted to defer their resolutions.

Out of more than 400 total resolutions proposed, only 17 were deferred until 2024, as listed on the Virtual Binder calendars for the House of Deputies and the House of Bishops.

“The Holy Spirit always surprises us, and I think it went extremely well,” Pennsylvania Bishop Daniel Gutiérrez, chair of the Social Justice and International Policy Committee, told Episcopal News Service. “I just have to commend the presiding officers and the convention committees for making it work.”

Some of the 17 deferred resolutions overlap with other resolutions that were passed by General Convention in Baltimore, so it is unclear what about those matters will be left for bishops and deputies to discuss in two years. Resolution D096, for example, calls for the creation of a new position of director of LGBTQI and women’s ministries. Although the status of that resolution is listed on the Virtual Binder as deferred, General Convention adopted another resolution, A063, to achieve the same goal.

Other deferred resolutions had proposed creating various task forces and conducting studies on a range of topics, such as pacifism, aging and the funding of clergy and lay benefits.

Gutiérrez’s committee and a parallel committee of deputies opted to defer three resolutions until 2024, each of them labeling Israel an “apartheid” state. The use of the word “apartheid” is a frequent sticking point and dividing line in the church’s perennial debate on the Israeli-Palestinian conflict. General Convention rejected a resolution in 2018 that sought to label Israel’s unequal policies toward Jewish Israelis and Arab Israelis as evidence of an apartheid state, similar to the South African government’s former policy of racial separation.

A discussion of those resolutions by General Convention’s two houses could have taken up a significant amount of time in Baltimore, Gutiérrez said. But he clarified that resolutions weren’t deferred because the bishops’ and deputies’ committees wanted to avoid the issue. Rather, they preferred to wait until General Convention had more time for a full debate.

“We wanted to give it the importance that it deserves and needs,” Gutiérrez said. He is hopeful that will happen in Louisville.

Even so, the 80th General Convention wasn’t silent on the Israeli-Palestinian conflict. Bishops and deputies adopted another resolution, C039, to “recognize the right of the State of Israel to exist and condemn the continued occupation, segregation and oppression of the Palestinian people; recognizing that for Israel to continue as a democracy it must allow for equality of all its peoples.” And they passed Resolution C013, affirming the right of individuals and organizations to participate in boycotts over human rights violations.

At the same time, the 80th General Convention chose to take action on other matters by referring some resolutions to interim bodies.

General Convention adopted five resolutions proposed by the House of Deputies’ Committee on the State of the Church to help The Episcopal Church adapt to changes in society and find new ways of supporting the church’s mission and ministry. A sixth resolution, however, that related to the church’s capacity to collect and study data on its adaptive efforts was referred to an interim body, which will study it and bring it back for consideration in 2024.

And when bishops and deputies meet again in two years, they are expected to reconsider this year’s proposals to add a feast day for the late Bishop Barbara Harris to Lesser Feasts and Fasts, the church’s calendar of saints. The resolutions proposed by 16 dioceses weren’t deferred outright, though the matter was referred to Standing Commission on Liturgy and Music, allowing additional time for research and consideration after Harris’ death in March 2020.

General Convention traditionally does not add people until they have been dead at least 50 years. In Baltimore, it compromised by updating the church calendar to mark Feb. 11, the date of Harris’ historic consecration in 1989 as the first female bishop in The Episcopal Church and the Anglican Communion.

ENS’ full coverage of the 80th General Convention is here.