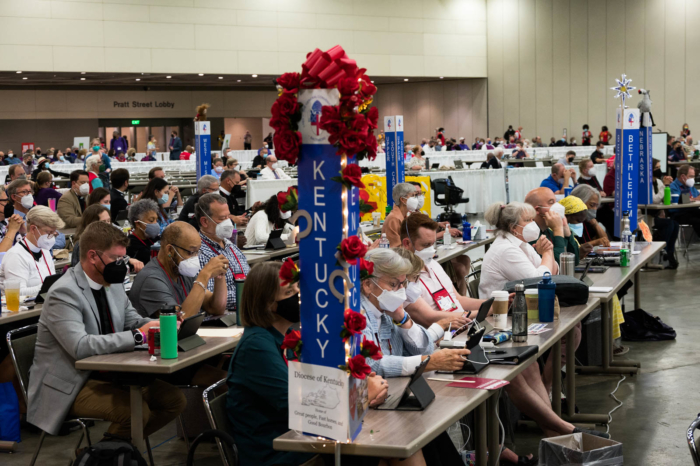 Deputies and bishops listen to a budget presentation on July 10, the only time the two houses met jointly at the 80th General Convention in Baltimore, Maryland. Photo: Scott Gunn

[Episcopal News Service] A week after the close of the 80th General Convention, it’s now safe to say the gathering of more than a thousand Episcopalians in Baltimore, Maryland, was not a super-spreader event, though some attendees have continued to test positive for COVID-19 after leaving the city.

The convention had been shortened from eight to four days, July 8-11, as a precaution intended to prevent cycles of illness, transmission and infection while the church’s governing body was conducting its business. Dr. Rodney Coldren, hired to advise church leaders on the public health precautions, told Episcopal News Service on July 18 that he has only received reports of four attendees testing positive for COVID-19 since the 80th General Convention’s last day. That brings the total known cases to 32.

“I suspect there were many more,” Coldren said. Attendees were asked to self-report their infections during the four-day meeting, but “we were not asking individuals to continue reporting after the close of General Convention.”

Among the positive cases were 28 deputies. Coldren also said two bishops, two staff members and two spouses reported infections during their time in Baltimore or in the five days after returning home. After those five days, it is unlikely that someone testing positive was infected at General Convention.

Coldren, whose contract runs through the end of July, is preparing a final report on the health outcomes of the 80th General Convention, with lessons learned from the precautions implemented and his recommendations for best practices going forward when the church’s governing and interim bodies meet in person.

This General Convention once was expected to draw as many as 10,000 people to Baltimore for some or all of its nearly two-week span, when it was originally scheduled for July 2021. The pandemic forced postponement to 2022, and in May, Presiding Bishop Michael Curry and the Rev. Gay Clark Jennings, then the outgoing president of the House of Deputies, endorsed a shorter, smaller in-person gathering in response to widespread concerns about the continued spread of the coronavirus.

In addition to mandating face masks in the convention halls and requiring proof of vaccinations, church leaders asked all attendees to commit to daily self-tests for infections. They canceled plans to allow visitors and exhibitors, and they kept bishops and deputies separated for nearly all of the legislative sessions. Church-affiliated organizations were asked not to schedule parallel meetings in Baltimore during General Convention.

A post shared by The Diocese Of East Carolina (@eastcarolina.episcopaldiocese)

Coldren had warned that a meeting with few precautions and masks optional could have produced a 10% infection rate among the 1,200 or so bishops, deputies, staff members and volunteers who traveled to Baltimore. Instead, he estimates the precautions kept the known infection rate below 3%.

Some attendees shared their experiences on social media, including whether they tested positive or negative for COVID-19. Many were thankful for the extra steps taken to minimize the risks of infection, even though it meant a scaled-down General Convention.

A tale of the 80th General Convention. #gc80 pic.twitter.com/UdGECapOWD

Still positively negative after #gc80. Now to the gym! pic.twitter.com/Q0mHNmjefu

The Rev. Miranda Hassett, a deputy from the Diocese of Milwaukee, posted a prompt on Twitter on July 17 asking for updates since the meeting in Baltimore. Most of the people responding said they had tested negative.

Grateful for all the precautions—I’ve tested negative a couple times since coming home and believe the rest of my deputation (AL) is also healthy—Thanks be to God (and the planning committee)!

“Grateful for all the precautions,” said the Rev. Seth Olson, a deputy from the Diocese of Alabama. “I’ve tested negative a couple times since coming home and believe the rest of my deputation is also healthy.”

One of those who tested positive in Baltimore was Sophie Kitch-Peck, who had been producing General Convention-themed videos for the House of Deputies TikTok account.

“I feel fine, and am asymptomatic,” Kitch-Peck said in on Twitter early July 10. “If I have interviewed you in the past couple of days, please be sure to be extremely careful and absolutely test tomorrow morning as it will have been two days since you’ve seen me.”

Bad news #gc80, I have tested positive this morning. I feel fine, and am asymptomatic. If I have interviewed you in the past couple of days, please be sure to be extremely careful and absolutely test tomorrow morning as it will have been two days since you’ve seen me.

A deputy, Randall Curtis of the Diocese of Arkansas, posted an update to Facebook on July 11 reporting a positive COVID-19 test. “They say I should be fine to be around other people by Friday,” Curtis said. “Until then, I think the turtles and the dogs are hanging out with me after my two-day road trip back home.”

Coldren was upbeat about the final infection numbers, and he said he thinks the experience of the scaled-down General Convention will be helpful in planning safe meetings in the future. It is too early to say whether The Episcopal Church in 2024 will be able to return to a full-scale meeting for its 81st General Convention in Louisville, Kentucky, Coldren said, but he added, “I’m hopeful.”