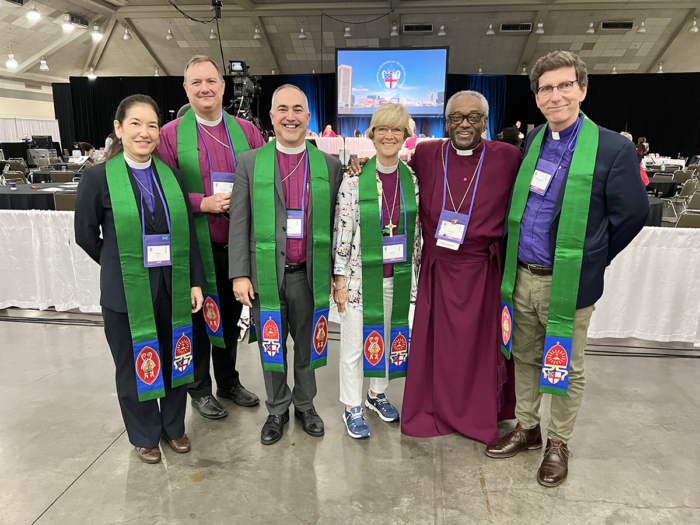 There were 32 reported COVID-19 infections at General Convention through the afternoon of July 12, according to Dr. Rodney Coldren.

Twelve of those cases were new between Coldren’s reports to the House of Deputies on July 10 and 11.

“COVID-19 is doing exactly what it does: it multiplies,” he told the House of Deputies the morning of July 11. “We’ve gone from an average of five a day to seven to 12. This is exactly what it does.” He added that he expected more convention participants to test positive on July 12.

Coldren said his July 11 briefing that using a conservative model, he would have expected 76 cases, or about 10 percent, in their house had convention not been shortened to four days and had protective measures such as masking and daily self-testing not been taken. His modeling assumed no major outbreaks within any deputation but, rather, one-to-one transmission every other day, he said.

“Know that what you have done really has protected your fellow deputies,” he said.

Coldren warned participants that they needed to be vigilant up to five days from the end of convention. He urged them to be masked when in public.

Coldren is a public health expert hired to advise House of Deputies president the Rev. Gay Clark Jennings with $50,000 approved by Executive Council. He recently retired after 30 years with the U.S. Army, where he led its COVID-19 response in Europe and Africa.

“It’s hard to even put into words our gratitude, our respect, our appreciation for working so hard with us, so graciously and so expertly to help us protect the most vulnerable among us,” Jennings told him after he ended his report.

Diocese of Kentucky extends Louisville invitation to General Convention in 2024

On July 11 the Rev. Steve Pankey, deputation chair of the Louisville-based Diocese of Kentucky, extended an invitation to the House of Deputies and all those who will be participating in the 81st General Convention, which is set to take place in Louisville in July 2024. He said he also spoke on behalf of Bishop Terry White, the rest of the diocese, the entire Commonwealth of Kentucky and Province IV.

He added that those attending would be coming to the home of Muhammed Ali, Thomas Merton, the Kentucky Derby and “11 herbs and spices.” He said participants would be welcomed with “open arms and hopefully speedy WiFi” to help “shine the light of God’s love in our community.”

Pankey also noted that Christ Church Cathedral would be the site of the election of the next presiding bishop.

Later in the House of Bishops session, White praised the Diocese of Maryland in his own comments. “The bar has been set incredibly high, and we are looking to celebrate our common life in Christ together” in Louisville.

He also noted that the diocese and Louisville are still reckoning with racial injustice injustice raised after the killing of Breonna Taylor two years ago. “The presence of the church, you all coming to be with us, means the world to our diocese.”

The proposed $100.5 million budget for 2023-24 sailed through the House of Bishops in the morning session July 11, the final day of the 80th General Convention, with the bishops adopting a spending plan that had been approved the night before by the House of Deputies.

The bishops passed the budget without any discussion, though Texas Bishop Suffragan Jeff Fisher offered some introductory remarks as vice chair of the Joint Standing Committee on Program, Budget & Finance. The bishops also passed Resolution A048, which reforms the budgeting process, partly by entrusting development and presentation of the budget to a new standing budget committee to be created by Executive Council.

The deputies devoted more time to discussing the budget in their July 10 evening session. Some of the questions focused on the pandemic-related surplus, $5 million of which was applied to this two-year budget. Church leaders have warned that one-time revenue and cost savings related to the pandemic are not likely to continue, and it is uncertain what church revenues will look like in future triennia.

Other questions focused on the assessments that dioceses pay to support the churchwide budget. They will continue to pay 15% of their revenue, with the first $200,000 exempt from that calculation. A proposed amendment failed that would have lowered that rate to 14.75% in the two-year budget while setting a target of 10% in future budgets.

The House of Bishops added a new member at its morning session July 11. Bishop-elect Shannon Duckworth was seated after she received the required majority of consents from bishops and standing committees in the canonical consent process.

Duckworth walked onto floor accompanied by the outgoing bishop of Louisiana, the Rt. Rev. Morris Thompson. She was seated at the bishops’ table 11.

Duckworth was elected bishop diocesan on May 14. Her consecration and ordination service is scheduled for Nov. 19.

While Episcopalians were meeting in a smaller General Convention July 8-11 in Baltimore, Maryland, greetings from other provinces around the Anglican Communion and from ecumenical partners were sent in support of its work.

Good wishes were sent by more than 20 bishops of the Anglican Communion, as well as heads of some of The Episcopal Church’s full communion partners. Leaders of other Christian denominations and the church’s interfaith partners also sent their best wishes for members of the House of Bishops and the House of Deputies.

Videos of all the greetings are available online.