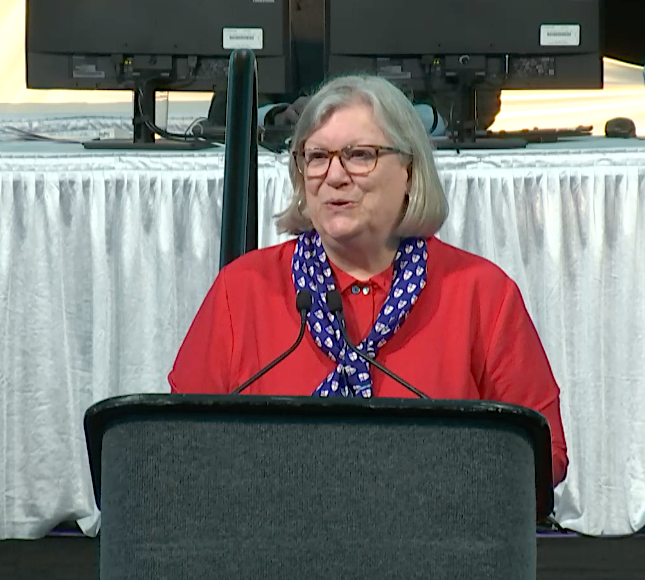 The Rev. Gay Jennings offers remarks before her final term as president of the House of Deputies ends. Photo: Video screenshot

[Episcopal News Service — Baltimore, Maryland] In the final moments of her service as president of the House of Deputies on July 11, the Rev. Gay Clark Jennings described her journey to leadership in The Episcopal Church and urged deputies to embrace the generational change that is taking place and to stay committed to working for structural change to make the church more inclusive.

Jennings preached her final sermon as president during Morning Prayer on July 9. The sermon is here.

In her remarks, she gave a special thanks to her husband, Albert, for his support of her ministry of leadership, and to their son, Sam. She said her beloved daughter, Lee, died 12 years ago, “I know how proud she would be.”

Jennings told deputies that she has sought to empower new leadership throughout her presidency, just as former House of Deputies President Pamela Chinnis did in 1994 in asking Jennings, then a second-term deputy, to serve as a press briefing officer and later as chair of the Committee on Canons. It was in that role, Jennings said, “I discovered I like to be called Madame Chair.”

Jennings said she shared her story not only to reminisce but to remind those assembled of “the way that the House of Deputies, General Convention after General Convention, serves as an engine of renewal and reform and resurgence for our church.”

She noted that she was handing the president’s gavel to a new president, Julia Ayala Harris, and the House of Deputies then would be led by two women of color.  Ayala Harris is Latina, and newly elected vice president the Rev. Rachel Taber-Hamilton is Shackan First Nation. “You will be in a House of Deputies that the founders of this church quite literally could not have imagined,” she said.

Jennings added, “This kind of change, this seismic, generational-shifting, paradigm-straddling change, is a cause for enormous celebration.” However, she warned, “It is not enough simply to appoint and elect young people and people of color to lead you. You must also support them, encourage them and work with them to change the structures and the systems that perpetuate racism and misogyny that is still endemic in our church.”

She noted especially passage by this General Convention of Resolution A125, which creates the Episcopal Coalition for Racial Equity and Justice. This action, Jennings said, “provides the opportunity to change the structures of the church to be more committed to racial justice and equity, to root out as the systemic racism that too often prevails.”

Video of Jennings’ remarks can be found here.