[Episcopal News Service – Baltimore, Maryland] Maryland Bishop Eugene Sutton challenged The Episcopal Church to “tear down walls” of division across both church and community, with love, truth-telling, reckoning and reconciliation, while preaching during July 10 worship.

Sutton, in a prerecorded sermon broadcast to each house because bishops and deputies worshipped separately due to the convention’s COVID-19 restrictions, also expressed hopes for the 80th General Convention to adopt Resolution A125, which would establish the Episcopal Coalition for Equity and Justice, a voluntary network of dioceses, congregations, organizations and individuals, dedicated to dismantling the impacts of white supremacy, systemic racism and internalized oppression. On July 9, bishops concurred with deputies, doing just that and adopting A125, which was proposed by the Presiding Officers’ Working Group on Truth Telling, Reckoning, and Healing. 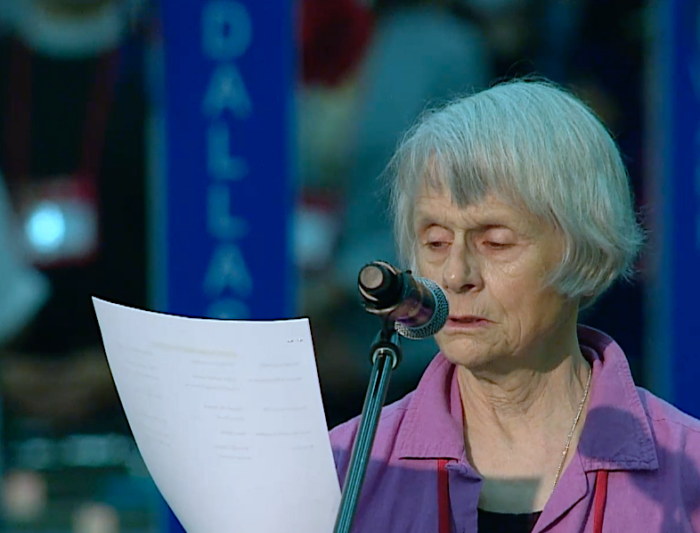 Diocese of Oregon Deputy Becky Snow reads the names of women deputies who were elected to serve or had served but were not memorialized previously. Photo: Video screengrab

Women deputies who were elected to serve or had served but were not memorialized previously, were remembered during the prayers of the people, including Elizabeth Dyer, the first woman to be seated in the House of Deputies, and Elizabeth Davis Pittman, Nebraska’s first Black and first woman judge, and the first female deputy of color, who was elected but denied a seat.

Sutton invoked images of walls, from biblical stories of Jericho and Babel to the Great Wall of China, and echoing former President Ronald Reagan’s famous 1987 challenge to the Soviet leadership: “Mr. Gorbachev, tear down that wall,” in reference to the Berlin Wall that divided the city and Germany into East and West, to the U.S.-Mexico border wall, all of which fail to keep out those who desire entry, he said.

“I believe God is telling us today, Episcopal Church, tear down those walls. Tear down the walls of separation in your church, your nations, your cities, your societies.” In a sermon that elicited both laughter and applause, Sutton said the way to do so, is with humility, “before we start tearing stuff down and trying to save the world on our own.

Sutton recalled that, as a new bishop in 2008 he created a series of goals to save the diocese and its community. All failed. “But what we are getting really good at, is love,” he said. “We talk openly about love, we practice it, and when we fail to love right, we call each other on it. We work at it, at loving God with all of our heart, soul, mind and strength. We work on loving our neighbors. To us doing justice is love in action.”

Consequently, the diocese has focused intentionally on racial reconciliation and repairing the breach. Sutton said the diocese, 90% white, stretching from Appalachia to the Chesapeake Bay, Republican and Democrat, urban and rural, rich and poor, conservative and progressive, voted unanimously at a May 2019 convention to “not give, but return money” from the diocese’s financial resources to impoverished Black communities across the state.

Acknowledging The Episcopal Church’s culpability, persistent silence and economic gain as the result of slavery, Jim Crow segregation laws, lynching, redlining, voter suppression and other unfair employment practices and forms of racial justice, he said: “First, we had to tell the truth about ourselves. The truth is The Episcopal Church stole. We stole Black lives, and from Black livelihoods. We destroyed their families. We dehumanized them. We treated them like dirt and legislated for hundreds of years that they were not fully persons.”

Additionally, the church profited from societal and economic structures that oppressed Black Americans, “making it more difficult to own property, to vote—which is still going on now, trying to suppress the vote, trying to make sure Black people would not get a good education, jobs, health care, would not make money resulting in generations of communities that could hand down wealth to their families.”

Sutton added, “We fearlessly looked at our diocesan history and told the story. We encouraged our parishes to uncover their histories and tell their stories about how they related to the Black community. Sometimes, the truth hurts, but we heard Jesus say it will also set you free.”

“We kept hearing Jesus say pay down the debt you owe to impoverished Black communities in this state.” Consequently, the diocese created a $1 million seed fund to invest in educational, housing, health care, environmental and economic development projects.

“That figure was not a mathematical computation, it was a moral one. It was taken from endowments and other diocesan funds and represents about 20% of our annual budget. It will put a dent in some other things we want to do. It will hurt. And it should hurt because it’s owed. It’s owed to the Black community after centuries of stealing money from African American communities.

The community response has been overwhelmingly positive, he said. During a visit to a small parish in a coal mining area, the congregation presented him with a check for $10,000 for the fund, he said.

“Their ancestors had nothing to do with slavery, but they wanted to be in solidarity with uplifting the under-invested Black and impoverished communities, especially in rural areas,” he said.

“That’s what love does. They got it. All too often, we want to do reconciliation on the cheap. We don’t want to pay the price of being reconciled. We want it for free. We want it to be easy and all smiles.

–The Rev. Pat McCaughan is a correspondent for ENS based in Los Angeles, California.