The House of Bishops on July 10 concurred with the House of Deputies, adopting a resolution condemning the Russian Federation’s aggression in Ukraine and calling on its leaders and supporters to halt hostilities immediately and to enter into good faith negotiations.

Resolution B008, “A Call for Cessation of Conflict in Ukraine,” offered by the Committee on Social Justice and International Policy, also calls upon “those among the nations of the world who may have the capacity to influence the choices made by those directing this war urgently to do so.”

The resolution, which had sparked some lively discussion about whether to directly name the Russian Federation as the aggressor, commends the Episcopal Relief & Development, the disaster relief arm of The Episcopal Church, and congregations in Europe, for their support and relief efforts for Ukrainian refugees, as well as the ongoing work of diplomats and peacemakers to bring a swift and just end to the conflict, and to aid in the restoration of Ukraine’s independence and autonomy. 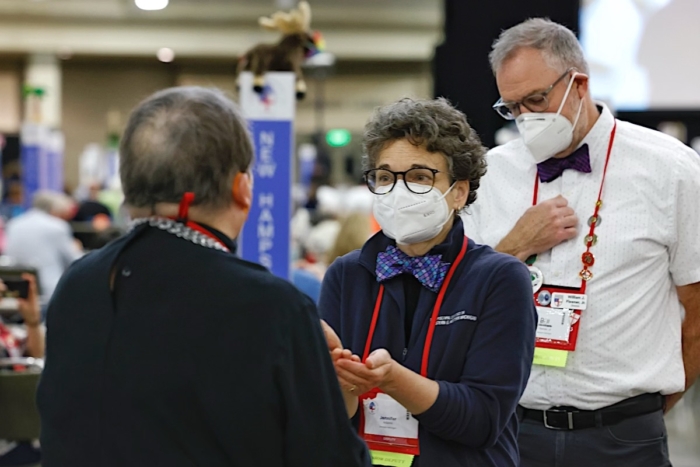 Many deputies tied on bow ties July 10 in honor of the passing of the Rev. William John Spaid, who died March 20, 2022, at 68, after a short, non-COVID-related illness.

A bowtie devotee, Spaid had served as a General Convention deputy many times. He was appointed canon to the ordinary of the Diocese of Western Michigan in 2002 and held the post until 2019. He then became the canon missioner for the southern region of the diocese. He retired in 2021.

His death in Kalamazoo, Michigan, came on the eve of the 35tth anniversary of his ordination to the priesthood. His full obituary is here.

How does the House of Deputies know that the minutes of its proceedings are accurate? It’s because members of the Committee on Certification of Minutes carefully check them every day.

The Rev. T. J. Freeman, a deputy from Northern Indiana, is a member of that committee as a first-time deputy. He told Episcopal News Service that he and the other 12 committee members make notes of actions the house takes throughout the day, and they receive draft minutes from the General Convention Secretariat every evening after the close of the final session. So far, those drafts have ranged in length from 24 to 54 pages.

Members gather in person the next day at 7 a.m. to go over the minutes, line by line, comparing the draft with their notes to check for accuracy, spelling and grammar. In one case they found an item that was noted in the draft minutes but not included in the full text, which was corrected so it was part of the official proceedings to be included in the Convention Journal.

Freeman said that being a member of this committee “is not the most exciting work, but it is necessary to preserve an accurate record of the proceedings of General Convention.”