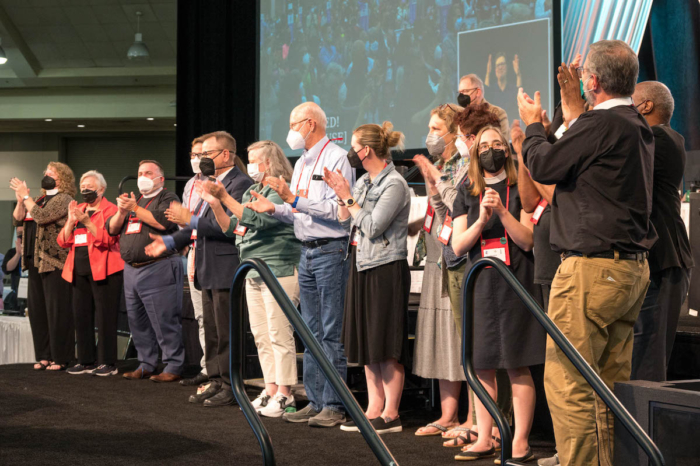 [Episcopal News Service – Baltimore, Maryland] The Episcopal Church in North Texas now is on the path to having a new identity as part of the Diocese of Texas.

On July 9 the House of Deputies voted unanimously to approve Resolution D050, setting in motion the reunification of the Fort Worth-based North Texas with the Diocese of Texas.

The North Texas diocese, with 14 congregations and fewer than 4,000 members, was greatly diminished in membership by a 2008 schism, in which a majority of clergy and lay leaders in the Episcopal Diocese of Fort Worth voted to leave The Episcopal Church over disagreements about the ordination of women and LGBTQ+ people.

The merger is following a process known as reunion, since both dioceses have roots in the historic Diocese of Texas. The House of Deputies’ vote follows action in June by the diocesan conventions of each of the two dioceses to approve the merger.

North Texas Deputy Katie Sherrod spoke in favor of the resolution, saying that ever since the 2008 split, those who remained faithful to The Episcopal Church were left with few buildings or clergy but with a “fierce sense of liberation” and began to focus “not on what we have but on what we have to give.” She said, “New ministry sprang up, as we began to appreciate the deep hunger here for news of a loving, liberating, life-giving God,” and they even began to grow. But to continue to offer the message of God’s love to what Sherrod called “the fastest-growing area” in the United States, she said North Texas realized it needed a partner, and that reunion with the Diocese of Texas would strengthen both parties. And they had plenty to give, she said, “for while we are tiny, we are fierce.”

The Rev. Christine Faulstich, a deputy from the Diocese of Texas, then stepped to the microphone, and wiping tears from her eyes said her diocese was excited to partner with what she called “a visionary and mission-oriented diocese.” She praised the people of North Texas for their “tremendous creativity, fortitude and above all faith, as they have persevered in preaching the gospel through extremely difficult circumstances.” She said the Diocese of Texas looks forward to working and praying with them and planting new churches together.

Deputy Cindy Smith from the Diocese of San Joaquin, who was accompanied to the microphone by other members of her diocese’s deputation, offer their support for the proposal. San Joaquin itself had suffered a split in 2007, and Smith said to those in North Texas, “We see you, we love you, we support you, and we wish you the best of luck in this next step.”

The Rev. Gay Clark Jennings, House of Deputies president, then asked deputies in favor of the resolution to stand as able, and members rose to their feet. With no opposition, Jennings declared the resolution adopted and asked deputies from North Texas and Texas to come to the platform, where they were met with sustained applause.

The resolution now goes to the House of Bishops for final approval.