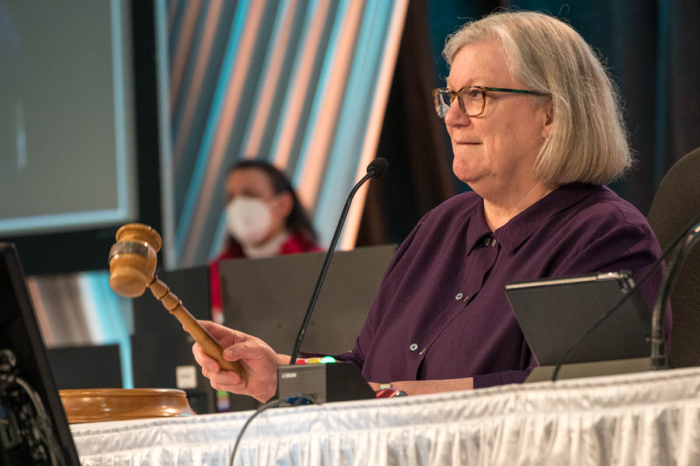 The Rev. Gay Clark Jennings, shown here presiding over the house, gavel in hand, will finish her term as House of Deputies president at the close to General Convention on July 11. Photo: Scott Gunn

[Episcopal News Service – Baltimore, Maryland] Even as she tried to object, the House of Deputies rose with sustained applause the afternoon of July 10 to thank the Rev. Gay Clark Jennings for her 10 years of service as president of the House of Deputies. The festive tribute began with Minnesota Deputy Sally Johnson, who has served as chancellor to Jennings since her election in 2012 (and for six years before that), standing at a microphone and demanding, declaring and opining that the tribute would begin, as Jennings attempted to wave the effort off.

After greetings from the Rev. Debra Bennett, a deputy from Ohio, Jennings – and the deputies – were treated to a video greeting from former British House of Commons Speaker John Bercow, perhaps best known for his distinctive call to “Order!” when members of that house became unruly. Jennings later said she was amazed by the greeting, as she often has watched videos of Bercow’s leadership in action. Parliamentarian Bryan Krislock organized the video greeting via Cameo, a celebrity video service.

The Very Rev. Sam Candler, deputy from the Diocese of Atlanta, described Jennings’ tireless work on behalf of the House of Deputies, the “senior house” he reminded her and others watching via livestream.

A video from the “junior house” featured Presiding Bishop Michael Curry, Michigan Bishop Bonnie Perry and Bishop Sean Rowe of Western New York and Northwestern Pennsylvania. Curry said that when he was elected in 2015, Jennings took him under her wing to help him get started in his new ministry, and Rowe called Jennings an iconic figure in The Episcopal Church. “No one loves the church more than she does,” he said.

Perry described a time Jennings, then a deputy, had run through the House of Deputies to make certain an important point of order was heard, saying that she “uses the structure for good.” She noted Jennings’ help in the work of the church for greater inclusion, saying of this and other efforts, “If Gay got involved it would happen because Gay Clark Jennings gets things done.”

Curry noted that he and Jennings share a love for the television show “America’s Got Talent” and often text each other with comments about contestants or videoclips they found. He declared Jennings the winner of “The Episcopal Church’s Got Talent.”

After a final prayer from house chaplain the Rev. Lester Mackenzie, the house adjourned its tribute and its afternoon session.