[Episcopal News Service – Baltimore, Maryland] The General Convention is holding its own against COVID, according to official reports. 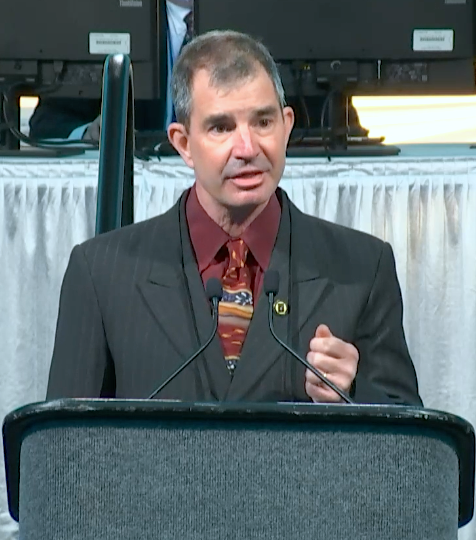 “So, while cases are rising, they are not explosively rising,” he said July 10. “We will continue to watch and be mindful.”

No bishops testing positive since arriving in Baltimore, according to Amanda Skofstad, The Episcopal Church’s public affairs officer.

House of Deputies News TikToker Sophie Kitch-Peck is among those who tested positive.

Bad news #gc80, I have tested positive this morning. I feel fine, and am asymptomatic. If I have interviewed you in the past couple of days, please be sure to be extremely careful and absolutely test tomorrow morning as it will have been two days since you’ve seen me.

Coldren asked deputies to keep track of those colleagues who had tested positive and are now isolating in their hotel rooms, noting that convention will end before their isolation does. “You all will be going home and abandoning them into the wilds of their hotel rooms,” he said. “There are volunteers here who will assist them, but you need to make sure they have reached out and made that connection.”

Some convention attendees have reported getting invalid results on their daily COVID tests. Coldren said if test does not show the “control line” and, thus, comes up as invalid, testers should not assume either they are negative or positive. They must retest, and he said convention staff was working to make extra tests available to make up for the invalid ones.

In other news I brought a tab collar shirt but no collar so I folded up the lid of this morning’s Covid test box #gc80 https://t.co/DS99884iyO pic.twitter.com/lAukZ1ww1b

On July 9, Coldren urged the deputies to follow the convention’s COVID recommendations and rules which, he said, were not enacted to protect people who feel comfortable with COVID. “They’re there to protect those who are immunosuppressed and those who just plain do not want to get your COVID,” he said.

He told deputies that he saw several of them in hotels bars the evening of July 8. “That is their personal choice. That could be your personal choice and I respect that, he said. “Do not, please, take away somebody else’s personal choice by failing to follow the guidelines here.” 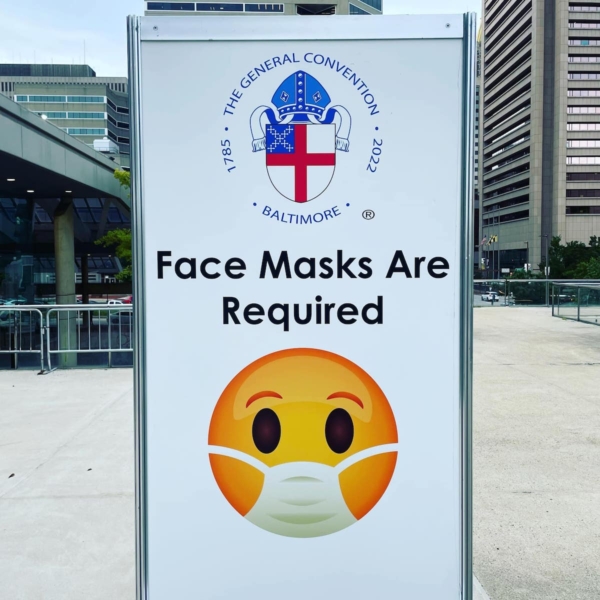 Every time they enter the Baltimore Convention Center General Convention participants are reminded of the mask rule. Photo: Scott Gunn

He also urged people to not assume that they do not have COVID if they are experiencing cold symptoms but test negative. “You can be spreading the disease and test negative for a day or two,” he said. “Please do not make the mistake of thinking that it’s just a cold” because in the time of COVID  what one thinks is a cold can very well be COVID.

The Rev. Gay Clark Jennings, House of Deputies president, also referenced the care and help available for deputies and alternates who test positive. Pastoral caregivers are available as are other volunteers to lend practical support such as delivering medicine and food. The House of Deputies has also set up a “mutual aid fund” to help cover the additional costs of testing positive while in Baltimore, such as airline ticket changes and extra nights in hotels during isolation. Jennings thanked those who have contributed to the fund.

“Bear one another’s burdens and so fulfill the law of Christ,” she said. “If you need assistance in any of these ways, please reach out. People and funds are waiting and willing to assist you.”

Coldren, a public health expert hired to advise Jennings with $50,000 approved by Executive Council, recently retired after 30 years with the U.S. Army, where he led its COVID-19 response in Europe and Africa.