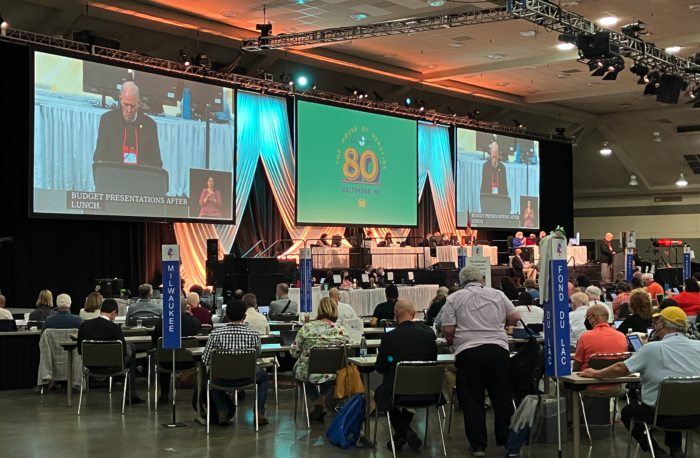 [Episcopal News Service – Baltimore, Maryland] The House of Deputies, in an evening session on July 10, adopted a $100.5 million churchwide budget, and the House of Bishops followed by adopting it in a morning session July 11.

The deputies’ vote came hours after the 2023-24 play was presented in a joint session of the House of Deputies and House of Bishops as mandate by The Episcopal Church’s Canons. It was the first and likely will be the only only time at the 80th General Convention that bishops joined deputies in the same convention hall.

The committee sees the churchwide budget as “a means to which we do the work God has given us to do,” said Ehmer, the committee chair. The proposed budget “provides continued strong support for evangelism and creation care, with a significant increase in reconciliation and justice. It also ensures funding for the necessary foundation needed to accomplish the goals within those three pillar areas, while also maintaining our commitments and covenants to dioceses of The Episcopal Church and around the Anglican Communion.”

Program, Budget & Finance set aside $2 million before General Convention to be allocated for funding of resolutions adopted by bishops and deputies here in Baltimore. In the church’s budgeting process, some resolution with funding implications are passed without money set aside in the budget for them, though Ehmer noted that the resolutions still establish the priorities that guide Executive Council in managing the adopted budget going forward.

“While we were unable to fund all of the resolutions of this convention, the proposed budget is balanced,” Ehmer said. It will use $5 million over the next two years from a surplus generated by pandemic-related revenues and cost savings, and it will maintain a 15% assessment on diocesan revenues while increasing the amount of revenue exempted from that assessment from $140,000 to $200,000.

Despite financial uncertainty related to the pandemic, diocesan payments have remained steady, and the two-year proposed budget estimates $57.7 million from those payments.

“The vast majority of dioceses have been contributing their full assessment,” said Fisher, the vice chair, eliciting applause from bishops and deputies.

The budget also includes about $26 million in income from the church’s investments, though church leaders have warned volatility in the stock market could make it hard to precisely estimate that total.

Much of the new spending in the budget is tied to resolutions proposed by the Presiding Officers’ Working Group on Truth-Telling, Reckoning and Healing. Central among them is Resolution A125, for which the budget proposal includes $400,000 in start-up funds for a new Episcopal Coalition for Racial Equity and Justice.

Ehmer said 89% of the money that the committee initially set aside to fund General Convention resolutions was later allocated to measures connected to the church’s reconciliation work. In addition to the new coalition, the budget plan includes spending $225,000 on research and to confront The Episcopal Church’s historic ties to the federal system of Indigenous boarding schools, as outlined in Resolution A127.

The joint session offered the latest example of pandemic-fueled changes to church governance. In contrast to past meetings of General Convention, bishops generally have refrained from visiting with deputies in their house, because of agreed-upon protocols to minimize transmission of COVID-19 in Baltimore. The joint session was only a partial exception.

At the end of the morning session, the Rev. Gay Clark Jennings, president of the House of Deputies, had advised deputies not to “try to sneak their bishops onto the floor for a photo opportunity” when they returned in the afternoon for the budget presentation. Instead, some deputations bent the rules by posing for photos with their bishops in the back of the House of Deputies’ hall. That was the space set aside for bishops to attend the budget presentation.

With the bishops in back, Presiding Bishop Michael Curry sat in the front next to Jennings and chaired the joint session. The presentation in the House of Deputies lasted about an hour, with half of that time allocated for questions from bishops and deputies.

Several of the questions from deputies and bishops had to do with which resolutions would and would not be funded in the budget. “I would like to know the amount of funds requested that were not budgeted for,” Adrián Linares-Palacios, a deputy from the Diocese of Puerto Rico, asked in Spanish through an interpreter.

Ehmer said he had no answer yet, though church leaders should be able to calculate that total after the 80th General Convention ends and determine which adopted resolutions were not funded.

The budget process itself was the topic of another resolution adopted by the House of Deputies in its morning session. A048 would eliminate Program, Budget and Finance and instead empower Executive Council to present its budget proposal directly to General Convention through a standing budget committee.

Executive Council still would have the authority during each triennium to make further changes to the budget as necessary through its authority as the church’s governing body between meetings of General Convention.

The Rev. Nancy Koonce, a deputy from the Diocese of Idaho and past member of Executive Council, spoke in favor of A048 during the morning discussion. “We’re told if something’s not broke, don’t fix it,” she said. “But the current budget process is broken.”

The reforms would streamline the process, Koonce said, ending the expectation that Executive Council spend two-and-a-half years producing a budget draft only to hand it over to Program, Budget & Finance to get up to speed and finalize a proposal for presentation. Under the new process, “the people that develop the budget will be presenting it to this body at convention,” she said.

The changes also should make it easier to accommodate the funding requests of General Convention resolutions, Ehmer said during the afternoon joint session. “The new budget committee,” he said, “will meet again [after General Convention], and they will look at every resolution that’s passed by this body and try to figure how to fund them as best is possible.”