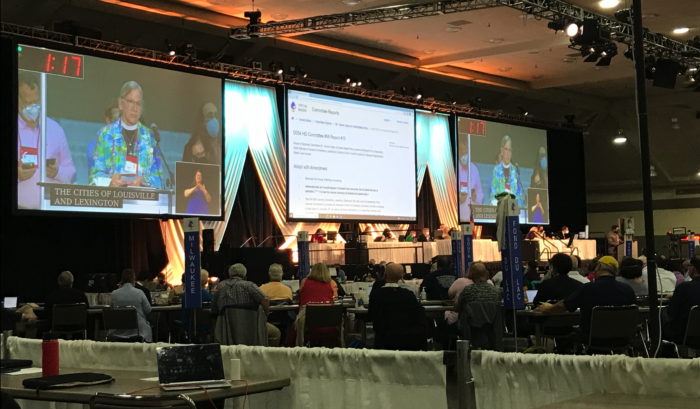 The Rev. Barbara Merrick of the Diocese of Kentucky speaks against Resolution D054 during a House of Deputies debate on July 9 at the 80th General Convention. Photo: David Paulsen/Episcopal News Service

[Episcopal News Service – Baltimore, Maryland] The House of Deputies spent more than an hour on July 9 discussing how to plan future General Conventions now that the Supreme Court has overturned Roe v. Wade, and much of the impassioned debate focused on whether The Episcopal Church should avoid meeting in states where abortion now is illegal.

Kentucky is one of those states, and planning is underway to hold the 81st General Convention in Louisville in 2024. That planning was thrown into question by Resolution D054, which proposed asking church leaders to consider relocating that and all future meetings of General Convention to venues where women and others able to conceive, bear and birth children have full access to reproductive health care.

“As a young woman in the church, I believe it is unfair to ask people who are pregnant or may become pregnant to come to a convention where they may not be able to access reproductive health care, care which is critical and which can be lifesaving,” said Maria Gonzalez, a lay deputy from the Diocese of Olympia.

She and several other deputies argued that laws outlawing abortion don’t just go against The Episcopal Church’s policies toward this issue. They also could put bishops and deputies in real harm, because the laws could apply to be interpreted to apply to some emergency medical procedures. “In early pregnancy, complications can come quickly and without warning,” Evangeline Warren, a deputy from Ohio, said.

Other deputies, however, warned that such a resolution could set a dangerous precedent of making meeting location decisions based on how governmental policies align with the church’s stances on political issues. Several also said the church can be a voice for justice in such places while supporting faithful Episcopalians in their opposition to laws that run counter to Christian teachings and church stances.

“We in the Diocese of Kentucky are grieving beyond measure about our state Legislature’s actions against the reproductive rights of women,” the Rev. Barbara Merrick, one of the diocese’s deputies, said in urging D054’s defeat. “But we have been working for several years to prepare for the 81st General Convention. Untold hours and dollars have been spent making the 81st a wonderful experience.”

Merrick also noted that Louisville is a relatively progressive city in an otherwise conservative state. “We have an opportunity in the House of Deputies to shed light on the darkness of laws that are unjust,” she said.

After extended debate on the resolution and several amendments, the house voted 377-408 to defeat Resolution D054.

Deputies raised similar concerns during the subsequent discussion of Resolution A001, setting the five finalists for the 82nd General Convention in 2027. That resolution, which passed in a voice vote, includes language requiring church leaders to “consider the physical and emotional well-being and safety” of attendees when picking a site.

The adopted resolution included an amendment that specified three criteria for selecting a site:

The four-day meeting underway now in Baltimore was scaled back because of COVID-19, with about 1,200 people attending, but past meetings of General Convention have drawn as many as 10,000 people to the host city for some or all of the governing body’s gatherings, which usually span about two weeks. Hosting General Conventions also is seen as an economic boost for the local economy. Until it was shortened, for example, the 80th General Convention was expected to generate more than $20 million in economic activity for Baltimore.

The Supreme Court’s conservative majority, in its June 24 ruling in the case of Dobbs v. Jackson Women’s Health Organization, upheld a Mississippi law that prohibits abortions after 15 weeks of pregnancy, effectively overruling Roe v. Wade, the almost 50-year-old opinion that guaranteed a constitutional right to abortion. The new ruling effectively leaves the matter to state legislatures and courts to decide.

Abortion rights groups have predicted that about half of all states will severely limit or outright ban abortion now that the Supreme Court has allowed them to do so, including in 13 states with so-called “trigger” bans, intended to take effect upon Roe’s repeal. One of those states, Kentucky, where the fate of its anti-abortion law is pending in state court. The ban on abortion is on hold for now, until challenges to the law are resolved.

And in Oklahoma, the state already passed a new law in May outlawing nearly all abortions from fertilization, a measure that is being challenged in state court but now appears unlikely to face a federal court challenge.

The Rev. Tim Baer, a priest from the Diocese of Oklahoma, was the first deputy to speak July 9 on the two resolutions regarding sites of General Convention. He said he understands some deputies’ strong desire to limit meetings to states where abortion is legal, but he spoke against drawing that line and turning the church’s back on “the important witness of the people in these states.”

“We live in these states, not just for a 10-day convention but every single day. You may be frustrated with Oklahoma or Kentucky or any of the other 20 states’ politics, but I assure you, you’re not more frustrated than me,” Baer said. “Our witness is so important as The Episcopal Church.”

Public opinion on abortion has been narrowly divided for years, though a consistent majority of Americans said they do not want to see the Supreme Court overturn Roe v. Wade, according to Gallup, and a poll from May, 55% of respondents described themselves as pro-choice.

The Episcopal Church’s positions on abortion generally have sought to balance a pastoral approach to supporting women and others able to conceive, bear and birth children who face unwanted pregnancies with the church’s stance on political responses — that governments must ensure women have control over their medical care and are free to make decisions based on their own consciences.

That resolution, however, concludes by questioning the effectiveness of legislative solutions, and it calls on state and federal governments to “take special care to see that individual conscience is respected and that the responsibility of individuals to reach informed decisions in this matter is acknowledged and honored.”

This year, Resolution D054 was on rocky ground going into the 81st General Convention, after a split vote on it in committee. A majority of deputies on the Social Justice & U.S. Policy Committee voted in favor of it in a June 22 meeting, but the bishops’ committee voted to reject it.

Since the House of Deputies was the house of initial action, the defeat of D054 means it will not be taken up by the House of Bishops. Resolution A001, on the other hand, has been sent to the bishops for adoption as amended.