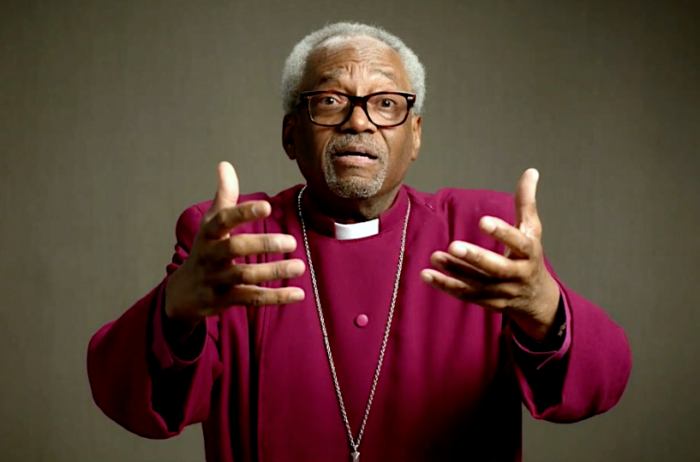 Presiding Bishop Michael Curry preaches to both houses of General Convention during the opening Eucharist July 8. Curry’s sermon was a pre-recorded broadcast on screen, as bishops and deputies worshipped separately due to the convention’s COVID-19 restrictions. Photo: Video screenshot

[Episcopal News Service – Baltimore, Maryland] Opening the 80th General Convention here on July 8, Presiding Bishop Michael Curry put the gathering in context: perhaps not the grand, joyous reunion the church had craved, but a moment of orientation in “strange and difficult days.”

Curry delivered the sermon at the opening Eucharist via a pre-recorded video message, shown in the Houses of Deputies and Bishops as they worshiped separately in the Baltimore Convention Center. Worshipping separately was one of many signs, Curry noted, that this was not a normal convention, having been scaled-down and shortened due to COVID-19. Still, he said, it was a blessing to gather over 1,000 deputies, bishops and staff members in Baltimore, where he once served as a priest at St. James Episcopal Church.

General Convention, the church’s bicameral governing body, splits its authority between the House of Bishops and House of Deputies, typically with deputations from all 112 of the church’s dioceses and mission areas. Convention continues through July 11, with all legislative sessions and Eucharists livestreamed here.

Preaching on the Book of Isaiah and its descriptions of the Babylonian exile, Curry compared that age of disorientation and turmoil to the past few years in the United States and the unprecedented disruption they have wrought. He listed a now-familiar litany of crises – the pandemic, the Jan. 6 insurrection, George Floyd’s murder and the resulting racial reckoning, the rise of violent white nationalism, the epidemic of gun violence, the Ukraine War and more – and offered the words of Isaiah as a way for Episcopalians to reorient themselves.

“Maybe, in the incredible providence of almighty God, the word of a prophet from the seventh century before the birth of Christ might speak to us in the 21st century A.D. ‘Look to the rock from which you were hewn, to the quarry from which you were dug. Look to Abraham, your father, and to Sarah who bore you.’”

The Rev. Lester V. Mackenzie, House of Deputies chaplain, breaks the host during convention’s opening Eucharist on July 8 as deacons the Ven. Ruth A. Elder and the Ven. Janice L. Grinnel look on. Photo: Video screenshot

The same message, he said, is found in the hymns “Christ is made the sure foundation” and “My hope is built on nothing less,” and in the parable of the man who builds a house on a stone when others have built theirs on shifting sands. And he recalled his own experience of finding a stronghold amid uncertainty when he was growing up in Buffalo, New York, in the early 1960s. 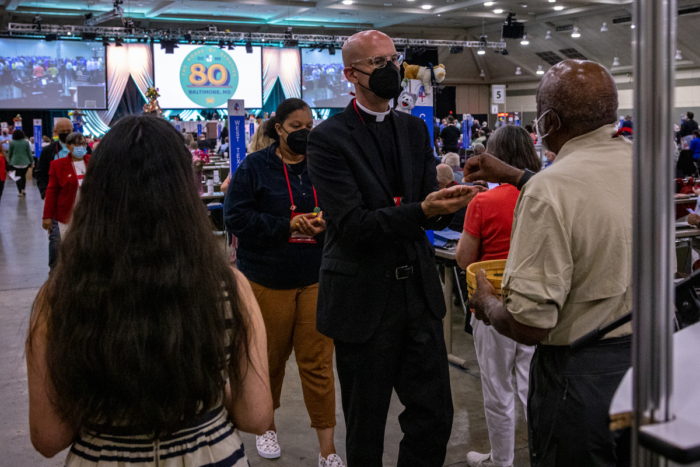 His public school system was being desegregated, he recalled, and he and some other students from his primarily Black school were being transferred across town to a mostly white school. Before the transition, his Sunday school teacher reminded them of the 1963 March on Washington that had just taken place and said the journey they were about to take was a part of that great dream of equality and justice. But, she said, “remember where you came from.”

“When you go to a new and strange place, remember where you came from. It will orient you,” Curry said.

Continuing the theme of returning to fundamentals, Curry referred to the “Jesus in America” Ipsos survey commissioned by the church last year. 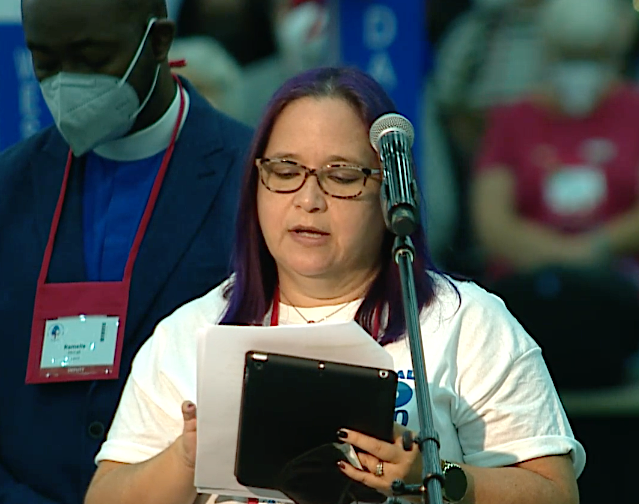 Spanning the increasingly secular American population, the study was centered, he said, around the question: “Have we asked people in society, who do you say Jesus is? Have we asked ourselves that?”

The results showed an overwhelmingly positive view of Jesus across all sectors of society, but about half of non-Christians viewed Christians negatively, associating them with terms like “hypocrisy” and “judgmental.” The church’s mission now, he said, is to close that gap between Jesus and his followers.

The study will be used to inform an upcoming social media evangelism campaign designed to bring Jesus’ message into secular American society – “to share this with the wider culture beyond the red doors of the church,” he said. More information will be released in the late summer or early fall.