The “big” story of the first morning of the 80th General Convention – in addition to the introductions, welcome messages and worship services – was the lack of WiFi. Systems failed in both the House of Bishops and House of Deputies, preventing people on the house floors from accessing the internet on their church-provided iPads, which forced the bishops and deputies to postpone any votes that required digital tallies.

“The issue required several patches to become functional and changes to switches to accommodate the number of devices on the system and to provide added access points to WiFi. The team will further address this through a software upgrade this evening.”

Several deputies generated a running commentary on Twitter about what some began referring to as #gcnowifi.

We’re told that some deputies have wifi and others don’t. Much like resources are distributed in our nation. #gc80

Internet is back in HoD…until everyone gets on to check! –#gc80

Did anyone bring cards? #gc80

After Noonday Prayer in the House of Bishops, Presiding Bishop Michael Curry asked if the bishops had access yet to the internet.

“Is it working? Let me just see a show of hands of those for whom it’s not working.”

Most hands were raised.

“OK, we’re in the same place,” he said. The house soon recessed for lunch.

When the houses returned in the afternoon, WiFi was back up and running and most deputies reported being able to access the house’s voting portal.

A required step for both the House of Deputies and the House of Bishops to do the work of the church is to formally “organize” itself by electing and appointing officers and declaring the needed quorum. Each house informs the other house of its “organization.”

After the deputies accomplished this step, the Rev. Gay Clark Jennings, president of the House of Deputies, decided to convey the house’s official message to the bishops via a FaceTime call to Presiding Bishop Michael Curry. She donned a Buffalo Bills hat in honor of Curry’s favorite football team.

Curry was unable to take Jennings’ first call because Dr. Rodney Coldren, a public health expert hired to advise Jennings on COVID protocols for General Convention, was addressing the bishops.

“OK, call me back,” Jennings said. Curry did a few moments later.

The Presiding Bishop is making a FaceTime call to the President of the House of Deputies. Apparently, we have dragged the General Convention all the way into the early 2000s. #gc80 pic.twitter.com/rL3pi7tDhQ

In April, Executive Council approved $50,000 to hire Dr. Rodney Coldren, a public health expert, to advise the Rev. Gay Clark Jennings, House of Deputies president, as she and other church leaders developed a plan for a safe General Convention during the pandemic. At the 80th General Convention, during the first morning sessions, each house invited Coldren to present the latest updates on COVID-19 mitigation efforts.

Fifteen deputies tested positive before getting on a plane, Coldren said. “There were very few cases today. I expected many more,” he told the House of Deputies. “This is truly good news. I do anticipate more – it’s the nature of COVID. Remain vigilant.”

On July 8, after the House of Bishops concludes its afternoon session, Bishops United Against Gun Violence plans to lead a procession out of the Baltimore Convention Center to the streets near where a man was shot and killed a day earlier during an altercation with a man washing car windows for money.

At the end of this afternoon's sessions of #gc80 Bishops United will lead a walk to the site of yesterday's fatal shooting at Light and Conway. Deputies are invited. From both houses, go to the registration area, turn left, exit the Charles St. exit to Pratt and Charles. 1/

The shooting happened at about 4:30 p.m. July 7 near the corner of Conway and Light streets. A motorist reportedly got into an argument with “squeegee workers,” got out of the car and began swinging a bat at the workers, at which point one of the workers pulled a gun and shot the driver.

The shooting happened about one block east of the Baltimore Convention Center, where bishops and deputies were checking in. Presiding Bishop Michael Curry and the Rev. Gay Clark Jennings, president of the House of Deputies, were conducting a pre-convention media briefing at a hotel farther west of the convention center while police were responding to the scene.

ENS coverage of the procession is here.

Under one of the first resolutions taken up by the House of Deputies on July 8, house leaders proposed special rules of order intended to streamline the legislative process across four days, after the 80th General Convention was shortened and scaled back to reduce the risk of COVID-19 transmission.

“This is not a normal convention,” Brian Krislock, the deputies’ parliamentarian, said in outlining the proposed rules of order. “We’ve crammed nine days of legislation into four, and we have the same number of resolutions.”

Under the proposal, a third of deputies plus one would have to vote in favor of moving a resolution from the consent calendar to a floor debate. After some debate, the rules were approved by a voice vote.

When Bishop Sean Rowe – the House of Bishops’ parliamentarian – spoke to the House about guidelines for moving legislation along, he also mentioned that the House would have a ‘swear jar,’ but not for actual curse words. In this case, bishops must make a donation to Episcopal Relief & Development when they use the cliches that have pervaded the language of church leadership.

The banned words and phrases are:

The first violation came shortly after, as Bishop Diane Jardine Bruce, secretary of the House of Bishops, was giving her own presentation on the rules of order. Bruce was demonstrating the warning sign she gives to bishops who are speaking too long on trivial matters: by donning one, and then two, tiaras, before cutting them off.

“And as you see me lean into the microphone–” Bruce said, and was promptly called out for using a banned phrase, though she protested that it was used in its literal, not figurative, sense.

Rowe is also offering prizes for the best use of the term “perichoresis,” the best random quote and the best fictitious quote.

The eight deputies from the Diocese of Puerto Rico are literally wearing their support for Resolution A001 on their sleeves. 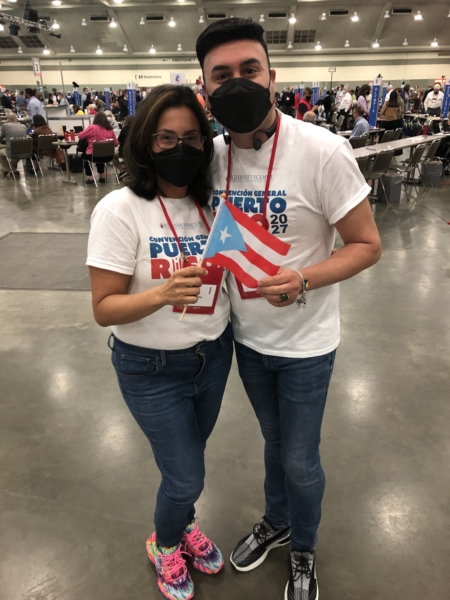 Each of the clergy and lay deputies spent their first day on the floor of the House of Deputies dressed in matching T-shirts that read, “Convención General, Puerto Rico, 2027.” The message is a reference to Resolution A001, which endorses San Juan, Puerto Rico, as one of five finalists for hosting the 82nd General Convention. The others are Phoenix, Arizona; Orlando, Florida; Charlotte, North Carolina, and Pittsburgh, Pennsylvania.

“Puerto Rico is ready for receiving all the deputations,” Deputy Cristina Olán told ENS during a break in the House of Deputies’ proceedings. “We want people also to enjoy the beauty of our island.”

San Juan has recent experience hosting Episcopal Church governance meetings. Executive Council gathered there in April for its last meeting before this General Convention. The council also met in Puerto Rico in June 2017.

General Convention has only met once outside the continental United States, in 1955, when Honolulu, Hawaii, was the host city after church leaders refused to hold the convention in then-racially segregated Houston, Texas. No diocese in the Caribbean or Latin American has ever hosted.

Puerto Rico “is a place where people of different cultures will come together,” Olán said. “We are ready. We are more than ready.”

Speaking of Puerto Rico, the final vote of the day in the House of Deputies was to approve Resolution C021, to trasfer the diocese from Province IX to Province II.

“After a deep process of discernment … our diocese decided [on] a transfer to Province II,” the Rev. Bryan Vélez-Garcia, a Puerto Rico deputy, said in Spanish on the house floor, with an English language interpreter. “With this decision we feel that we can continue to enrich our church.”

Puerto Rico’s current Province IX includes Spanish-speaking dioceses in the Caribbean and Latin America. Province II includes dioceses in New York, New Jersey and Pennsylvania, as well as Haiti, Cuba, the Virgin Islands and the Convocation of Episcopal Churches in Europe. It is known as the international-Atlantic province.

“We in Province II are happy to welcome Puerto Rico, and we hope that this General Convention will adopt this resolution,” New York Deputy Yvonne O’Neal said. She called Puerto Rico a “dynamic, missionary and evangelizing diocese.”

The resolution was adopted by deputies in a voice vote and now goes to the House of Bishops.