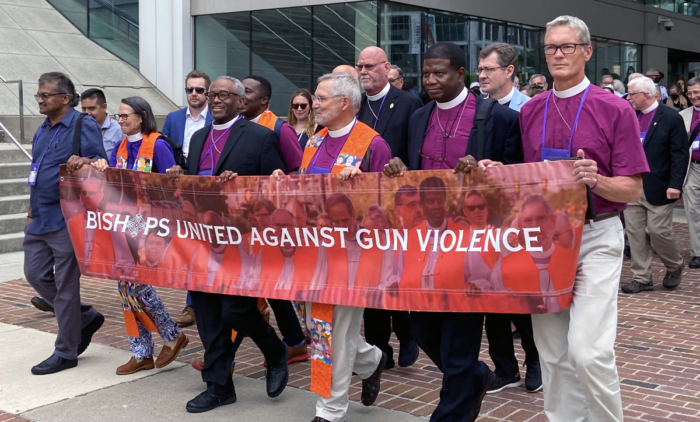 Bishops line up behind a Bishops Unite Against Gun Violence banner July 8 at the start of a march marking the death of a man by gun violence the day before, just blocks away from the Baltimore Convention Center where the 80th General Convention is meeting. Photo: Melodie Woerman/Episcopal News Service

[Episcopal News Service – Baltimore, Maryland] A murder on July 7 near the site of General Convention and the urging of two bishops, including one who happened upon the scene as it unfolded, prompted a march of hundreds of people from the Baltimore Convention Center to an open area a few blocks from the scene of the shooting, coordinated by Bishops United Against Gun Violence.

According to news reports, 48-year-old Timothy Reynolds was shot and killed after an altercation with two young men who were washing drivers’ windshields at an intersection near Baltimore’s Inner Harbor, about two blocks from the Baltimore Convention Center where the 80th General Convention is taking place July 8-11. After words were exchanged, Reynolds got out of his car and swung a baseball bat in the direction of those who sometimes are called “squeegee workers,” one of whom shot Reynolds. He later was pronounced dead at a local hospital. 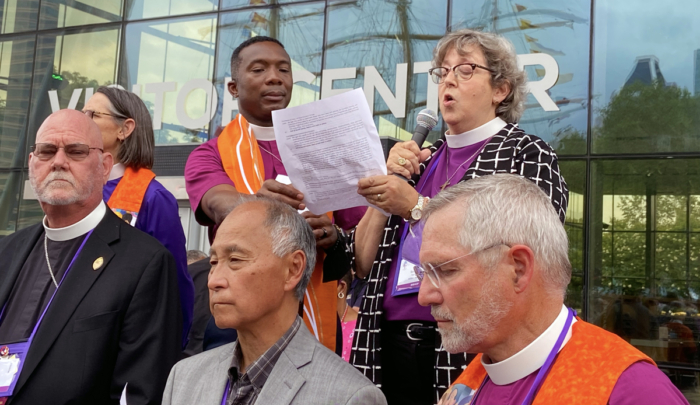 Bishop Susan Haynes of the Diocese of Southern Virginia told Episcopal News Service that she was walking back to her hotel yesterday afternoon when she saw first responders approaching a nearby intersection. She then noticed a body lying in the street and paramedics beginning to administer CPR, later placing the man into an ambulance. “I just felt the need to stay there and pray, because there was nothing else I could do,” she said. “I had a sense that this man was dying, and he needed to have prayer as he died.” Then, she said she “spoke a word of encouragement to the police officers and thanked them for their work.”

Haynes later learned of Reynold’s death on the news, and “I thought that if ever there was a moment when Bishops United Against Gun Violence need to make a witness, this was now.”

Bishop Bonnie Perry of Michigan, one of the convenors of Bishop United Against Gun Violence, also was thinking that the group should bear witness to the result of gun violence so near to where hundreds of Episcopal leaders are meeting. Haynes contacted Perry about 5:30 a.m. Friday morning and plans quickly were formed. Baltimore police blocked intersections so bishops, deputies and others could march safely during rush-hour traffic.

Bishops gathered in front of the convention center after the end of the afternoon session of the House of Bishops and behind an orange banner – the signature color of the call to end gun violence. They began to march through the streets, as members of the House of Deputies and others joined in, swelling the crowd to several hundred people. Marchers sang as they walked, adapting the words of old protest songs: “We’re gonna lay down our bats and guns, down by the riverside…” and “We shall end gun violence, one day… .”

When marchers, who had been joined by local journalists, some onlookers and curious tourists, reached an area deemed large enough to accommodate the crowd, Perry noted the march was taking place “to remember all the victims – those where were attacked by a baseball bat, and for the folks who shot a person who died, for the structures of poverty and racism that cause things like this to happen, but mostly because of the ready, accessible nature of guns in our country.”

Bishop Eugene Sutton of the Diocese of Maryland, which is headquartered in Baltimore, then spoke. The bishops present came from many parts of the world but were there “to make a common witness against the tragedy that happened near this space yesterday,” he said. Noting that the area where the murder, and the march, took place once was where enslaved people lived and were jailed, now replaced by shops and a baseball stadium. The killing, he said, wasn’t an accident. “It was the bringing together of racism, of poverty and violence,” he added, “We’re going to pray for all of the victims – all of the victims of the violence that’s in their hearts, the violence that’s in their hands, and the violence that comes from angry people having access to guns.”

Haynes of Southern Virginia read a passage from Isaiah, and Bishops Deon Johnson of Missouri and Bishop Jennifer Baskerville-Burrows of Indianapolis led prayers. Presiding Bishop Michael Curry then gave closing remarks, noting that writer and abolitionist Frederick Douglass once said he heard God tell him not only to pray for freedom on his knees but also on his feet. Curry urged the marchers to “pray until no child of God, no one made in God’s image, will ever be sacrificed, that violence will leave this land and this earth. Pray that one day every man, woman and child can sit under their own vine and fig tree, and we’ll learn how to lay down our swords and shield, down by the riverside.”

Then in a call-and-response with the crowd, Curry urged that “we not study” war, violence and hatred “no more.” He then offered a blessing to those who had gathered, as marchers disbursed through nearby streets.