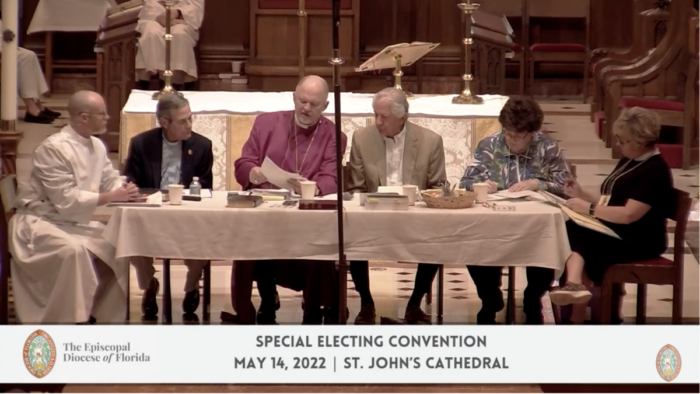 Bishop Samuel Johnson Howard (center left) and other leaders of the Diocese of Florida make announcements during the May 14, 2022, special electing convention at St. John’s Cathedral in Jacksonville, Florida. Source: Diocese of Florida

[Episcopal News Service] The Diocese of Florida has released an official response to the objection filed by some of the delegates who voted in the May 14 election of the Rev. Charlie Holt as bishop coadjutor. While the objectors had claimed that irregularities in the election process rendered the election invalid, the diocese says all the changes were properly made to ensure the healthy completion of an election amid COVID-19. The diocese also shared an opinion from a professional independent parliamentarian who examined the records of the election and found it valid and final.

The response also argues that the 37 objectors were motivated not by procedural concerns but by personal disapproval of Holt, whose election is also facing a separate, unofficial challenge by Episcopalians who have interpreted some of his statements as insulting to Black and LGBTQ+ people.

“If a candidate other than Bishop Coadjutor[-elect] Charlie Holt had prevailed, there would be no reason for the Objectors to have filed their Petition,” the diocese wrote in the response. “In other words, the objection officially concerns the process, but the concern of the objectors isn’t about the process, but about the results of the election.”

The response, written by Florida Bishop Samuel Johnson Howard; the Rev. Joe Gibbes, president of the diocesan Standing Committee; and Fred Isaac, diocesan chancellor, was emailed to members of the diocese on July 8 but dated July 1. The 20-page document responds to the points raised in the objection one by one.

The most contentious area of disagreement was around whether the required quorum of resident clergy was met, given that rules were changed two days before the election to allow clergy to participate remotely but not lay delegates. The objectors had claimed that diocesan canons do not allow for remote voting and therefore those who did vote remotely did not count toward a quorum. The diocese denied that claim and said the change was made because it was the only safe and reasonable way to reach a quorum.

Achieving a two-thirds quorum of the 174 canonically resident clergy in the Diocese of Florida is difficult because nearly half are retired or incapacitated or live elsewhere, the diocese wrote. Unlike lay delegates, clergy could not send alternates.

“Achieving a quorum of two­-thirds of those clergy canonically resident in the Diocese of Florida is an enormously high standard, a standard not fully appreciated until the Special Convention registration deadline neared,” the diocese wrote.

During the registration process, it was specified that the election would be held entirely in person. However, as the election approached, not enough clergy had registered to achieve a quorum. With so many unable to participate in person, “an electronic option was the only way we could achieve a quorum,” the diocese wrote.

While there is no language in the diocesan constitution specifically allowing online voting, there is also nothing prohibiting it, and it could not have been foreseen when the constitution was written in 1972, the diocese wrote.

Within a few hours of opening registration to online participants, a clergy quorum was exceeded, resulting in “the largest number of clergy participants for any convention ever held in the Diocese of Florida,” according to the response.

The response also denies the objectors’ claims that problems with the Zoom voting system interfered with the election. The diocese said that although online voters were not given a trial run before the actual vote itself, the system was successfully tested beforehand. In the actual election, votes cast by all 38 online voters were received for two of the three ballots; for one ballot, one voter was not online and thus did not cast a vote.

The diocese wrote that both its response and Moriarty’s opinion would be sent to the churchwide Court of Review as it begins investigating the objection. The Rt. Rev. Todd Ousley, the church’s bishop for pastoral development, previously told Episcopal News Service that Presiding Bishop Michael Curry would forward the objection to the Court of Review on July 1, giving them 30 days to write a report. That report will then be sent to all diocesan standing committees and bishops with jurisdiction along with the standard request for their consent. Then, within 120 days, a majority of each group would have to give their consent before Holt could be ordained and consecrated.

In almost all cases, the consent process is a formality, but Holt’s election is facing a separate challenge in that area. Some Episcopalians have voiced objections to Holt’s election on social media, citing Holt’s views on same-sex marriage and statements that they view as intolerant or insulting to LGBTQ+ people and Black people, and some have said they are writing to their bishops and standing committees to encourage them not to consent to the election.

Holt responded to those concerns in a June 16 video message to members of the diocese and The Episcopal Church. He has previously declined to comment on the election process, saying he was not involved with organizing or running it.

Because of the objection process, Holt cannot be ordained and consecrated on Oct. 8, as the diocese had originally scheduled. If he does eventually receive the required consents, his ordination and consecration would likely take place in early 2023.