Navajoland Area Mission Deputy Ruth Johnson tells the House of Deputies “my hell began” at a New Mexico mission boarding school where she was beaten. The clock in the upper left marks the time remaining in her testimony. Photo: Video screenshot

[Episcopal News Service – Baltimore, Maryland] On the first day of the 80th General Convention following heart-wrenching testimony, the House of Deputies on July 8 initiated a new beginning in the life of the church, overwhelmingly approving resolutions to establish a voluntary coalition for racial equity and justice, and to reckon with The Episcopal Church’s involvement in Indigenous boarding schools.

“The pain and suffering caused by white supremacy cannot be minimized or denied,” Arizona Deput the Rev. John Kitagawa said when introducing Resolution A125, a substitute amendment offered by the Racial Justice and Reconciliation Committee, which he co-chairs. The resolution would establish a voluntary Episcopal Coalition for Racial Equity and Justice among dioceses and congregations.

“The veil of the continued complicity by institutions, including our church, is lifting to expose the wounds of generational trauma and internalized oppression,” he said. Dealing with these challenges, he added, would constitute “a seismic shift” for the church.

“This resolution is an invitation to join the church in a journey that has taken 400 years, at least, to summon up the courage to even try and deal with it,” according to New York Deputy Diane Pollard, a committee member who urged support.

Last month during its June 30 meeting, the Joint Standing Committee on Program, Budget and Finance committee set aside $400,000 as coalition start-up funds for the next two years. Additional funding may be considered in 2024 at the 81st General Convention.

Western Massachusetts Deputy Zena Link also advocated for the coalition’s approval, noting that systemic racism exists within both church and secular structures, and although organizational missions and values theoretically attempt a corrective, “as leadership changes within these structures so do the commitments to the initiatives and awareness of the issues. This is particularly true when addressing the issue of equity and even more true when addressing the issue of racial equity.

“If not deliberately and intentionally, most, if not all, organizations in this country will reset to upholding structures that were built on racial inequity and maintaining the economic benefits which came off the backs and the land of the most vulnerable people in this country,” Link said.  “[Resolution] A125 proposes The Episcopal Church be deliberate and intentional in ways that the church historically has not been. I encourage you to be deliberate, to live into what it means be beloved community always and not only when it is popular to do so.”

Similarly, deputies engaged in what Jennings called “holy listening” during testimony in support of Resolution A127, which would pledge more than $2.5 million over the next biennium to further The Episcopal Church’s commitment to investigating its role in Indigenous boarding schools; create a fact-finding commission to preserve and to provide a public platform to hear the stories of survivors of any such schools within dioceses’ geographic area; establish Indigenous community-based spiritual healing centers to address intergenerational trauma, and, to create educational resources regarding the church’s role in the schools.

In contrast to the $2.5 million recommendation, the Program, Budget and Finance committee’s proposed budget includes $125,000 to study the church’s complicity in the federal Indigenous boarding school system, another recommendation of the presiding officers’ working group.

Jennings noted she could have ended the debate after three successive speakers who supported the resolution’s passage. Instead, she allowed it to continue, she said, to honor the heartbreaking stories of deputies like Navajoland Area Mission Deputy Ruth Johnson, a survivor of two Indigenous boarding schools.

“My hell began at a boarding school in New Mexico, where I was beaten,” she said, her voice breaking as she fought back tears. “I could have easily been one of those who didn’t make it home,” she added, referring to recent revelations about the discovery of thousands of bodies of Indigenous children in Canada.

“I still have a hard time talking about it.” 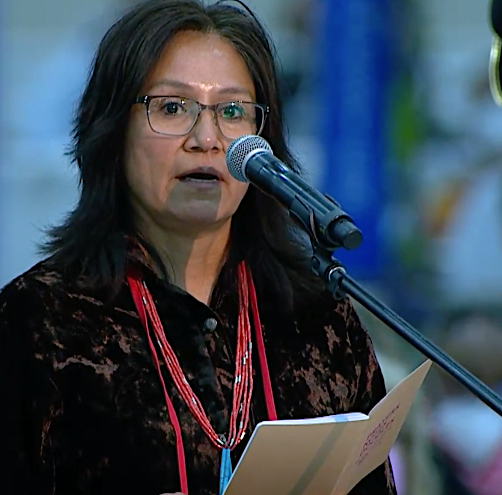 Navajoland Deputy the Rev. Cornelia Eaton tell the House of Deputies that she carries much of her own intergenerational trauma, “but I know healing is possible. We need the church to help us.” Photo: Video screenshot

Navajoland Deputy the Rev. Cornelia Eaton also urged passage, extending an invitation to the church “to journey with us. I invite you to join us in truth-telling, reckoning and healing. The Indigenous people have been through so much harm over centuries, more than 400 years.

“For three decades I have seen elders … talking about boarding schools and [the] intergenerational trauma that happened to all Indigenous people of this land. I have listened through all these decades, and I grew now into where I am today. I feel that now, today, their wisdom is with me. I am grateful and humbled by that. We have much work to do and this resolution will help us move forward as heal as the body of Christ together.

“I truly believe in the healing way, the blessing way, we call it in Navajoland. To heal from the harmful past, we move toward doing justice, and justice work is healing. I work among the people, I carry so much of my own intergenerational trauma, but I know healing is possible. We need the church to help us.”

In July 2021, the presiding officers issued a statement lamenting the church’s involvement in operating Indigenous boarding schools and called on Executive Council to deliver a comprehensive proposal for addressing the legacy of Indigenous schools at the 80th General Convention. They called for earmarking resources for independent research in the archives of The Episcopal Church, options for developing culturally appropriate liturgical materials and plans for educating Episcopalians across the church about this history, among other initiatives. 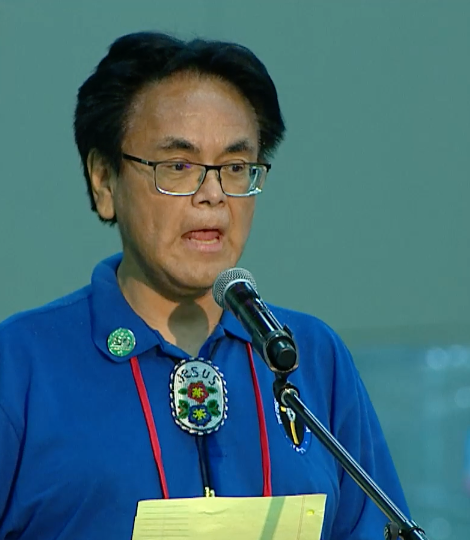 Alaska Deputy Paul Williams tells his fellow deputies that he has forgiven the trauma that led to his father and many other family members coming home from boarding schools thinking they were known only as a number after they had their native language and culture “beaten out of them.” Photo: Video screenshot

Alaska Deputy Paul Williams told the House of Deputies that his father was also a victim of the boarding schools. “As far as he knew, his name was only number 89,” an emotional Williams said. “Many of my relatives were in the same situation. They only spoke our native language [when they were sent away] … but it was beaten out of them through the churches and the schools. They came home thinking that’s their name. Now is a time of healing, healing of our bodies, healing of the land.

“It happened many years ago, but it still affects us today as Indigenous people of North America and all of us as God’s children and I hope and pray healing will start,” he said. “And forgiveness. I, myself, have forgiven, in Jesus’ name.”

The issue “is living and breathing among us,” Idaho Deputy Ron Bremen said. “Our church has history … you can see the pain our people are still enduring. It is a scary thing to look into … [and yet] a brave thing for us to do. Something we need to do.”

In other business the House of Deputies approved the following resolutions:

A126, proposed by the deputies’ Prayerbook, Liturgy and Music Legislative Committee, commits $100,000 to facilitate the Standing Commission on Liturgy and Music to convene gatherings of Episcopalians of color and a wide variety of ethnicities and from all countries where the church is present, to examine and propose amending all the language in the Book of Common Prayer, The Hymnal 1982 and other approved liturgical materials, in regard to “the colonialist, racist, and white supremacist, imperialistic, nationalistic language and content,” as well as discerning any cultural assumptions they may contain.

The Standing Commission on Liturgy and Music would also be required to report its findings “ongoing and widely throughout the next two years.”

A130, proposed by the House of Deputies Churchwide Leadership Committee directs Executive Council in the development of model hiring, workplace and committee/commission/board practices that intentionally increase equitable hiring and access to leadership positions for People of color “and that promote healthy worked environments within the church.”

The resolution also calls for the implementation of such policies within The Episcopal Church’s human resources department and encourages dioceses and congregations to actively address the ways white supremacist culture has shaped its own structures, policies and practices, and to work toward developing cultural competency. Such competency includes seeking out coaching, creating support systems for clergy and leadership of color, to address the challenges and stress of being the first or the only person of color in a mostly white context.

It specifically mentions providing professional development money for transition officers to continue to develop their understanding of structural and systemic racism, including the expansive gifts of underrepresented groups derived from nontraditional learning and working toward equity in evaluating, hiring and compensating candidates formed outside traditional residential seminary settings.

Deputies adopted an amended version of Resolution A129, proposed by the deputies’ Committee on Governance and Structure, which allocates $150,000 to direct the presiding officers to ensure both the church and the Church Pension Group undertake “historical research on the origins and sources of the financial and all other assets … directly tied to the enslavement of humans, the slave trade, and historical and current racial injustices,” and to report back to the 81st General Convention.

Additionally, deputies adopted resolutions to continue the work of the Task Force for Care of Creation and Environmental Racism for the next biennium. A086 would allocate $850,000 toward making a priority the development and support of programs that respond to eco-justice concerns, address environmental racism, and work to alleviate environmental burdens on Indigenous communities, and to provide training and financial aid and other resources for the work.

The resolution also calls for the task force to develop theological resources and materials regarding the sin of environmental racism, an exploration of environmental reparations and the ethical and moral implications of responding to climate change. It would also continue the work of the General Convention 2018 task force, to implement the carbon offset program, utilization of the Episcopal Asset Map to support and respond to environmental injustice and to establish a network of asset-based programs and to continue partnerships with environmental justice organizations begun in the last triennium.

A110 expands ministry to individuals with mental illness and requests $21,700 to develop and share resource materials and curricula in pastoral and ministerial mental health care for The Episcopal Church, its provinces, dioceses, parishes, seminaries, schools and affiliated organizations. The resolution also asks that the task force be expanded, and that its membership encompass a range of individuals with professional, personal, familial and organizational experience with mental illness.

The resolutions now move to the House of Bishops for consideration.