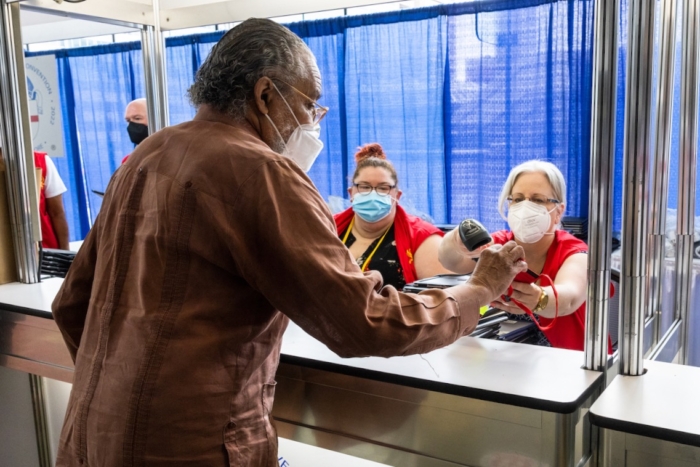 “It’s going very well. Everybody gets it. People understand that we have to check their health passes, and they have them ready,” said Katherine Schnorrenberg, a member of St. Peter’s Church, Ellicott City, in the host Diocese of Maryland, adding she took a week’s vacation, including her birthday, to volunteer. 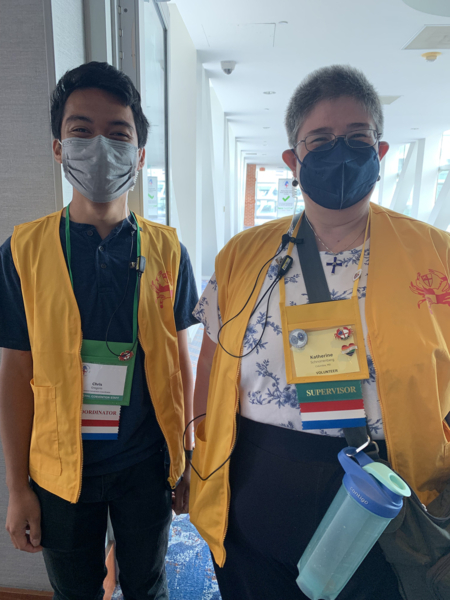 Despite a one-year postponement and a reduced schedule because of the COVID-19 pandemic, operations were smooth and enthusiasm high, said Fiona Nieman, deputy for convention and meeting planning in the church’s General Convention Office.

“We had people waiting outside the door to the convention center as early as 8:45 a.m., eager to come in and get their registration materials,” Nieman said. “It’s been quite a big buildup in terms of the planning, and there’s also a sense of relief that we’re finally here and ready.”

Nieman credited both the city of Baltimore and the Diocese of Maryland for “being absolutely incredible to work with” through the schedule postponements and added protocols. “Without them, we would not have been able to navigate through all these shifts and changes.”

Reducing the number of days “hurt the hotels and the city, yet they were still thrilled and excited to have us here in their city at this time,” she added.

Scaling down the gathering in Baltimore, however, will not save money. Church leaders have said it in fact will cost about $1.1 million more. Much of that total is tied to the church’s guarantee of a certain number of stays at hotels in Baltimore, an estimated liability of up to $750,000.

The Rev. Canon Scott Slater, Maryland’s canon to the ordinary, said that while adjusting planning has been challenging, “We’ve been happy to do it, to keep everyone as safe as possible. We love the opportunity to show off how wonderful our city is.”

Similarly, Jessica Pandolfino, who serves the diocese as an associate for communication administration, said that while delays and challenges brought “a sense of disappointment when things kept changing, there was also a sense of rallying together, of when you needed something, people stepped up.”

Patrick Haizel, the General Convention Office’s deputy for administration and operations, said he calls it, “the ‘boy scout’ convention because we’ve had to be prepared for anything. Flexibility is the keyword. We are thankful for the great people in the office in Baltimore, supporting the changes. The Diocese of Maryland has created wonderful Maryland Night offerings, there’s positive energy, in spite of meeting in the pandemic.” 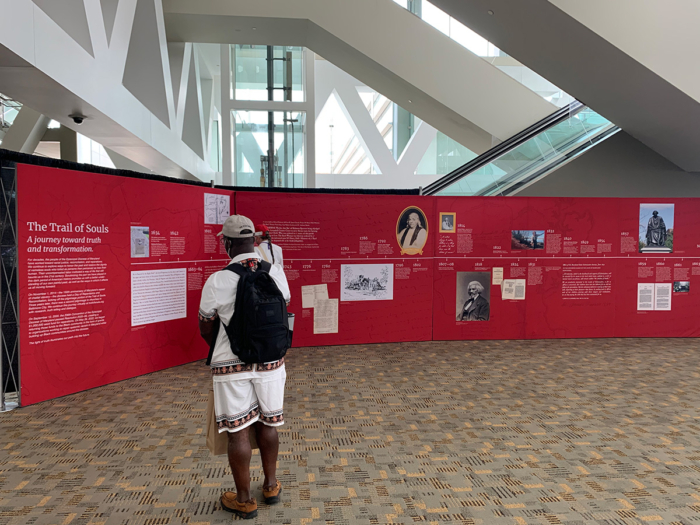 “The Trail of Souls: A journey toward truth and transformation” is an exhibit created by the Diocese of Maryland, chronicling efforts to reconcile the diocesan history of slavery with ministries of racial justice and reconciliation. It is located in the main hallway of the Baltimore Convention Center. Photo: Pat McCaughan

Convention attendees, including Alabama Provisional Bishop Brian Prior, said they are looking forward to in-person meetings and the sense of convention as a family reunion, after the four-year hiatus.

“I am looking forward to renewing relationships, and to seeing folks I’ve not seen beyond the virtual world in some time” because of the pandemic, he said.

About 650 volunteer positions have been filled, with some volunteers attending from as far away as Hawai’i and the Virgin Islands, according to Caroline Bomgardner, executive secretary to Maryland Bishop Eugene Sutton.

“There’s a real sense of excitement. There are some volunteers from Baltimore who’ve never seen a convention and are saying, ‘The Episcopal Church is coming to town, let’s come see it.’”

The Very Rev. Sandye Wilson, interim dean of All Saints Cathedral in St. Thomas, in the Diocese of the Virgin Islands, said handing out iPads and offering technical support to deputies offered her both a sense of homecoming and perspective.

“I’ve been a deputy to 12 conventions from five dioceses; it’s wonderful to be here to meet and greet everyone as they arrive,” said Wilson, a Baltimore native.

“It’s a different perspective, of serving as opposed to being served all those years. It’s a holistic view, being on both sides and it’s an opportunity to see everyone.”

Similarly, the Rev. Carol Burnside, who serves at St. Catherine of Alexandria Church in Baltimore, said she spent the morning offering directions as participants arrived.

“I wanted to be here because General Convention hasn’t been here in Baltimore since 1808,” she told ENS. “I thought it might not happen again for a while and I wanted to be part of it.”

For 19-year-old Zora Stovall, volunteering felt like a wonderful opportunity “to gain some valuable event experience and to help out.”

Chris Gregorio, 25, a third-year seminarian from Berkley Divinity School at Yale, said he heard there was a need for volunteer coordinators and answered the call.

“It’s great to be here. I get to learn more about the church this way.”

The Rev. Margarita Santana, Maryland’s canon for Latino ministry, said she is among those who will offer translation services.

“There are large Spanish-speaking delegations from Puerto Rico, the Dominican Republic, Colombia, Ecuador. I’m here to support General Convention but also to work with Latino clergy,” said Santana, who serves at Iglesia Episcopal de la Resurrección in Baltimore and who was also the first woman ordained a priest in the Dominican Republic.

In spite of all the challenges, receiving COVID tests and knowing there is a specific protocol in place to assist those who might need it, is indicative “of all the care that has been taken, concerning our health,” Santana said. “People feel safe, and this is good.”